US sends 'message' to Abbas with $80 million aid cut

The State Department has notified Congress that it's cutting FY 2015 assistance to the Palestinians by 22%. 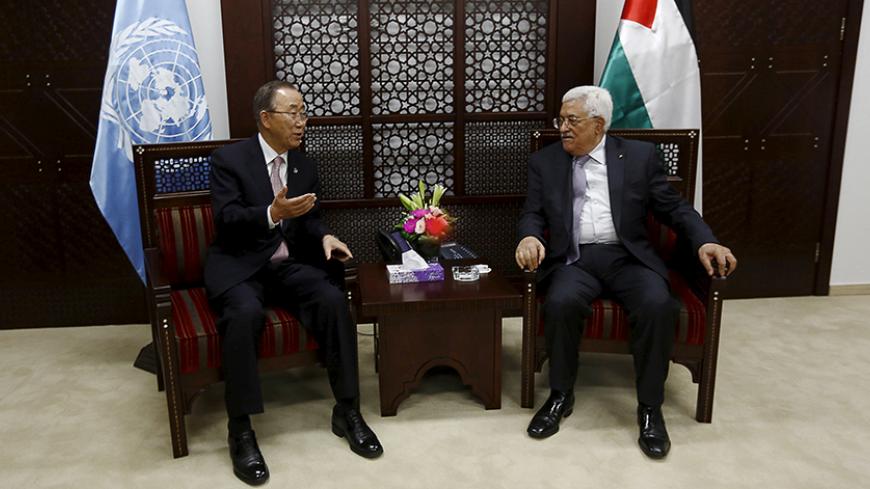 The Obama administration is cutting aid to the Palestinians by $80 million in what congressional sources describe as a "message" to Palestinian Authority President Mahmoud Abbas.

The State Department notified lawmakers on Sept. 25 of its intention to reduce economic aid for the West Bank and Gaza Strip from $370 million to $290 million in the fiscal year that ended Sept. 30, Al-Monitor has learned. The news of the 22% cut from the department's initial request comes amid mounting criticism from Congress about Palestinian "incitement" in the rash of stabbing attacks that have left at least 10 Israeli civilians dead over the past three weeks.

A State Department official told Al-Monitor that the decision to cut the aid was made in spring, before the latest outbreak of violence.

"There were several factors contributing to this decision, including unhelpful actions taken by the Palestinians and constraints on our global assistance budget," the official told Al-Monitor in an emailed statement.

"The cut was not directly linked to the wave of violence that is currently gripping Israel and the Palestinian territories, however, we have made clear our concern about inflammatory rhetoric over these past few weeks."

The congressional notification comes as US lawmakers have increasingly been demanding repercussions for what they deem to be provocative moves by the Palestinian Authority. These include the power-sharing arrangement with Hamas, the bid for statehood at the UN and recent statements that Israel is trying to change the status quo at Temple Mount.

"We need to dial up pressure on Palestinian officials to repudiate this violence," said Rep. Eliot Engel, D-N.Y., the top Democrat on the House Foreign Affairs Committee.

The committee voted unanimously Oct. 22 on a resolution taking Abbas and other Palestinian leaders to task for "incitement" of violence against Jewish Israelis, both for their recent statements and for longtime hate-mongering in Palestinian schools and media. While some Israeli right-wingers such as Agriculture Minister Uri Ariel have advocated for more Jewish access to the controversial site, Prime Minister Benjamin Netanyahu has largely maintained the status quo.

The aid cut is a "good first step," House foreign aid panel chairwoman Kay Granger, R-Texas, told Al-Monitor. She wrote a letter to Abbas along with ranking member Nita Lowey, D-N.Y., on Tuesday warning him that US aid would be "severely jeopardized" if Abbas refuses direct negotiations.

Granger has a hold on the aid request, congressional aides told Al-Monitor, along with House Foreign Affairs Chairman Ed Royce, R-Calif., as they seek more information from the State Department.

"Given that about one-third of the Palestinian Authority’s budget is financed through foreign aid, international donors have leverage," Royce said at a hearing Oct. 22 prior to the vote on the resolution. "They could follow the lead of the US Congress — and make direct funding of the PA off limits until the incitement stops."

Witnesses at the hearing said previous US denunciations of hateful Palestinian rhetoric have had no effect. They said Abbas, who faces intense pressure from his own people to stand up to Israel's occupation of the Palestinian territories and its expanding settlements, needs to pay a political price for such statements.

Elliott Abrams, a former deputy national security advisor under President George W. Bush who's now with the Council on Foreign Relations, recommended such steps as closing the Palestinian Liberation Organization (PLO) office in Washington, sanctioning PA officials and others with visa bans and earmarking US aid for specific programs untainted by corruption. David Makovsky, the director of the Middle East Peace Process at the Washington Institute for Near East Policy, agreed and urged Congress to press Europeans and other Palestinian donors to denounce anti-Israeli incitement.

"These are four different things that are not being done now," Makovsky said.

Middle East subpanel chairwoman Ileana Ros-Lehtinen, R-Fla., the initial author of the resolution, for her part called on not just the Palestinians but also Jordan to help defuse tensions. Netanyahu on Oct. 22 urged Secretary of State John Kerry and European Union foreign policy chief Federica Mogherini to press Abbas and Jordan's King Abdullah to issue a statement that the status quo at the Temple Mount hasn't been violated.

"Instead of inciting violence and promoting hatred, Abu Mazen [Abbas] needs to call for calm and work with the Israelis to restore the peace," Ros-Lehtinen said. "The king of Jordan also has an important role to play as the guardian of Jerusalem’s Islamic holy sites."

Others urged the United States to replace America's "transactional" relationship with Abbas — as well as with nondemocratic leaders in the region — with a more "transformational" policy aimed at changing their behavior.

"When he drops dead," said Jonathan Schanzer of the Foundation for Defense of Democracies, "we're going to have problems."

The resolution for its part also calls on the PA to work with Israel to reconstitute the Trilateral Commission on Incitement, which was created in 1998 following the Wye River Memorandum. The commission was disbanded after both sides used it for tit-for-tat finger-pointing.

"It became a way to polemicize things by different means," Makovksy told Al-Monitor. "I would try to fine-tune how is it done so you minimize the chance of grandstanding and polemics and focus it on, how do you improve at least the official messaging. [Otherwise] the committee can make things worse."

Royce told Al-Monitor he agreed with Makovksy's calls for closer cooperation with Europe and said he would put a congressional delegation together.

"It's good to have a dialogue with the Europeans on this issue at this time to see what we can jointly do," Royce said. "We should look at other ways to curtail incitement, because now it's on social media, radio, it's on television, it's being taught in the classrooms by the teachers as well."

"It's a dialogue that we need to have with the Europeans — and we will have an opportunity."

Editor's note: This article was updated on Oct. 26 with comment from the State Department.