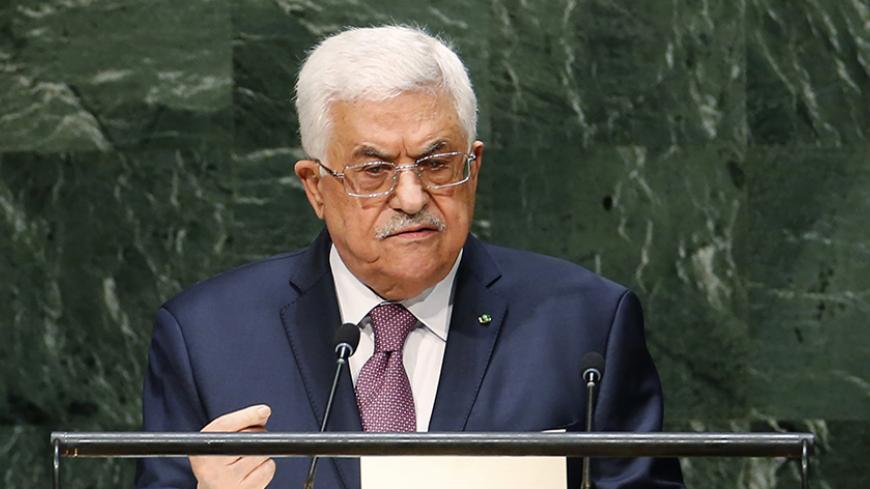 WASHINGTON — Congress and the Obama administration are increasingly at odds over $370 million in annual economic assistance to the Palestinians.

The latest clash comes after the Palestinian Authority (PA) on June 25 shared hundreds of pages of war crimes allegations against Israel with the International Criminal Court (ICC) in The Hague. Key lawmakers said the move should trigger an indefinite suspension of aid, but the State Department told Al-Monitor that it doesn't agree.

“By formally submitting allegations against Israeli forces to the ICC chief prosecutor, President [Mahmoud] Abbas has triggered a provision in US law that suspends all economic assistance to the PA," the top Democrat on the House Appropriations Committee, Rep. Nita Lowey, D-N.Y., said in a statement. "This bipartisan provision was written to prevent US tax dollars from rewarding purposefully provocative, unilateral steps that move us further away from the negotiating table."

The chairwoman of the Appropriations panel with jurisdiction over foreign aid, Rep. Kay Granger, R-Texas, issued a similar warning.

Current law "prohibits economic assistance to the Palestinian Authority if they initiate or actively support an International Criminal Court investigation that subjects Israeli nationals to an investigation for alleged crimes against Palestinians," she said in a statement.

Omnibus appropriations legislation that passed in December states that economic assistance to the Palestinians should cease if they "initiate" or "actively support" an ICC "investigation" that "subjects Israeli nationals to an investigation for alleged crimes against Palestinians." But the State Department and the Palestinians point out that while the ICC on Jan. 16 did start a "preliminary examination" into last year's war in the Gaza Strip, it has yet to initiate a formal investigation.

State Department spokesman Edgar Vasquez told Al-Monitor that while the United States doesn't believe the Palestinians were eligible to accede to the Rome Statute and join the court, it will "continue to provide critical assistance to Palestinians in the West Bank and Gaza."

The Palestinians, for their part, say they were merely responding to their obligations as a party to the Rome Statute when they shared the allegations of Israeli war crimes. They pointed out that Israel, which isn't a party, was invited to do likewise but declined.

The official added that lawmakers' opposition to a UN probe was proof of bias in favor of Israel. The Palestinians say they're moving unilaterally because Israel isn't interested in a two-state solution, as evidenced for example by Prime Minister Benjamin Netanyahu's own statements during the recent elections.

The top pro-Israel lobby American Israel Public Affairs Committee (AIPAC), meanwhile, is calling for a suspension of assistance to the Palestinians in the wake of their April 1 accession to the Rome Statute.

"By abandoning direct talks with Israel and asking international institutions to impose a non-negotiated solution to the Israeli-Palestinian conflict, Abbas’ efforts hinder the prospects for peace," AIPAC states on its website. "The United States must continue to press the Palestinians to return to direct bilateral negotiations with Israel — the only viable path to achieve a two-state solution."

Despite the Obama administration's continued support, certain key lawmakers — Lowey among them — have the ability to unilaterally ask the State Department to hold funds, a request that is almost never refused. Last year, for example, lawmakers temporarily blocked $230 million in aid for the West Bank and Gaza, Al-Monitor reported at the time.