Sen. Patrick Leahy, D-Vt., is calling for the State Department to hold a billion-dollar US helicopter sale to Egypt until Cairo pays for the medical bills of an American wounded in a 2015 attack. 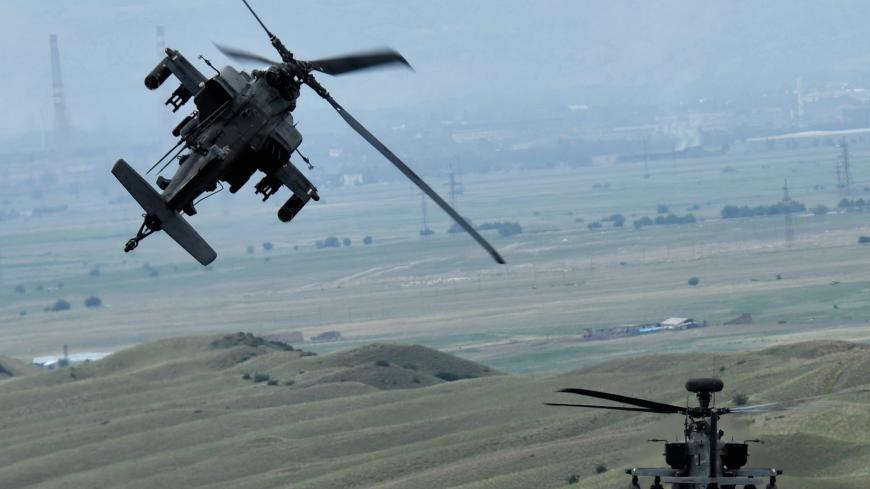 AH-64 Apache helicopters fly during a closing ceremony of the NATO-led military exercises "Noble Partner 2018" at Vaziani military base outside Tbilisi, Georgia, Aug. 15, 2018.

The top Democrat on the Senate’s powerful spending panel wants the Donald Trump administration to hold up a billion-dollar Apache helicopter sale to Egypt until it pays the bills of an American citizen wounded in a 2015 attack by the same US-made aircraft.

"We don’t know if the sale is going to happen, but we have made clear that the Egyptian government first needs to resolve April Corley’s case,” said an aide to Sen. Patrick Leahy, D-Vt.

In November, the State Department announced its decision to approve the sale of 10 new Apache helicopters to Egypt “to address US-Egyptian interest in countering terrorist activities emanating from the Sinai Peninsula that undermine regional stability.”

“The proposed sale will contribute to the foreign policy and national security of the United States by helping to improve the security of a strategic partner in the Middle East region,” the Pentagon wrote in a press release on the proposed sale. “This sale will contribute to Egypt's military goal to update its capability while further enhancing greater interoperability between Egypt, the US and other allies.”

Egypt also used US-made Apache helicopters in the botched 2015 raid that left Corley severely wounded. The attack mistakenly struck Corley’s tour group traveling in Egypt’s Western Desert, killing her boyfriend and 11 other tourists, mistaking them for militants. Corley is set to visit Washington next week for her first public appearance since the attack.

“The way they’ve used it [military aid] raises questions about whether they can use it responsibly and consistent with US law,” said Miller, now deputy policy director at the Project on Middle East Democracy. The UK-based rights group Amnesty International also reported that the Egyptian military used Apache helicopters to surveil protests in Cairo during the 2011 Arab Spring.

The Leahy aide told Al-Monitor that the Egyptian government offered Corley $150,000 for her medical bills, calling it “woefully inadequate” as the amount would not even cover the cost of her medical evacuation. Leahy is seeking support from other Democratic leaders in Congress for the move. House Appropriations Chairwoman Nita Lowey, D-N.Y., long reluctant to cut aid to Egypt due to its security cooperation with Israel, signed on to a letter in November calling on Cairo to pay Corley’s medical bills.

A former professional roller skater who once appeared in Madonna and Chet Faker videos, Corley now suffers from “debilitating physical and psychological injuries” and will require “extensive medical care for the rest of her life,” according a press release announcing her April 2 visit to Washington. Secretary of State Mike Pompeo told reporters that he had raised Corley’s case with Egyptian officials during a January visit.

The Leahy aide said the Egyptian government had claimed the group was at fault but the tour group had been granted access to the Western Desert by passing through multiple official checkpoints. The Egyptian Embassy in Washington did not respond to Al-Monitor’s request for comment in time for publication.

Despite Leahy’s decision to publicize Corley’s injuries from the attack, Pompeo opted in August to release $195 million in foreign military financing to Egypt, overruling the Vermont senator’s hold. Leahy is still holding up $105 million in the financing over Cairo’s detention of former New York taxi driver Mustafa Kassem as well as Corley’s medical bills.

The move comes amid reports in Arab media that Egyptian President Abdel Fattah al-Sisi will visit Washington and meet with President Donald Trump in early April. Foreign Minister Sameh Shoukry was in town this week and met with Pompeo on Wednesday, presumably to prepare for the president’s visit.

Former US officials expect Sisi to use the visit to boost his image weeks before a referendum on whether to extend his rule until 2034.

Egypt, however, will have to contend with Corley’s visit without US-hired public relations help. In January, the Egyptian Embassy in Washington cut ties with the Glover Park Group, ending a $2 million annual contract dating to October 2013, soon after Sisi ousted President Mohammed Morsi.