Sen. Patrick Leahy, D-Vt., has asked the Donald Trump administration to hold $300 million in military aid unless Cairo pays reparations for a 2015 attack on tourists and meets a series of human rights conditions. 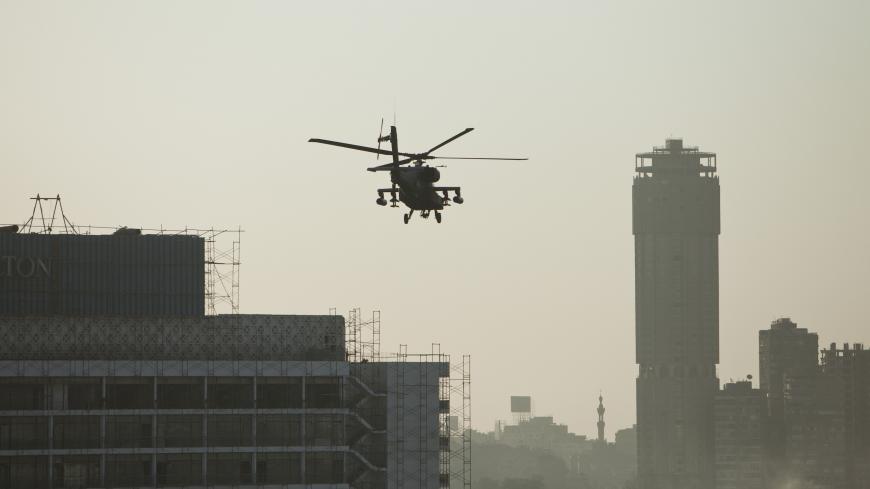 An Egyptian army Apache helicopter flies over the Cairo skyline during pro-military demonstrators at Tahrir Square on July 26, 2013. - GETTY/Ed Giles

The top Democrat on the Senate’s powerful spending panel is holding up $300 million in US military aid to Egypt until Cairo helps pay for an injured American tourist’s medical bills and meets several human rights conditions, Al-Monitor has learned.

Senate Appropriations Committee Vice Chairman Patrick Leahy, D-Vt., a persistent critic of President Abdel Fattah al-Sisi’s government, has shared several conditions with the State Department for the aid to be released, his office confirmed. These include providing compensation for April Corley, a US citizen who was grievously injured when Egyptian forces mistakenly bombed a group of tourists in Egypt’s western desert in 2015. The strike killed eight Mexican nationals and four Egyptians.

The tourists and tour company workers were killed by US-made Apache attack helicopters, and Leahy is also demanding that US officials and the media have access to Sinai and other areas where US military equipment is used. He is also raising concerns about the fairness of Egyptian criminal trials, calling on Cairo to dismiss the 2013 convictions of 43 US and Egyptian nongovernmental organization workers or pardon them and dismiss a 2017 law on associations that is seen as cracking down on civil society. And he wants a transparent investigation into abduction and murder of Italian graduate student Giulio Regeni in Cairo, who was under police surveillance when he disappeared in January 2016.

The hold follows Sisi’s re-election last month in a presidential election that drew congressional criticism after all but one potential candidate left the race, citing concerns about intimidation and fairness. But many of the issues raised by Leahy have upset America’s alliance with Egypt for years.

“No doubt, the Egyptians are going to feel unfairly treated,” said Elliott Abrams, a senior fellow for Middle Eastern studies at the Council on Foreign Relations. “This is pretty much a self-inflicted wound. They had so many opportunities to solve these problems.”

Egypt is eligible for up to $1.3 billion in US military aid every year, but the State Department notified Congress in January that it was withholding $195 million — or 15% — of that amount pending certification that Cairo meets congressional human rights requirements. Leahy’s hold represents an additional $105 million, for a total hold of $300 million in fiscal year 2017 foreign military financing. Egypt has just five months to meet the new conditions before the aid expires in September.

Leahy’s office told Al-Monitor that the new constraints are in line with US positions on Egypt, and that they had been communicated to David Satterfield, the State Department’s top-ranking Middle East diplomat. Experts say the move likely stems from longstanding congressional frustration over the country’s lack of transparency on human rights.

“This is something that’s rooted in the type of governments that Egypt has,” said Michele Dunne, director of the Middle East program at the Carnegie Foundation for Middle East Peace. “These are military dominated governments and they’re very resistant to transparency.”

Leahy is a longtime human rights champion and the author of the Leahy Law, which codifies the acceptable use of US military assistance. Last year he helped craft new restrictions to Egypt aid for fiscal 2018 that block the release of $300 million in military assistance unless Cairo improves its human rights record and releases political prisoners.

The new hold, however, goes beyond existing law, notably by singling out the Regeni and Corley cases for special attention. Corley, a champion roller skater who worked on Madonna and Chet Faker videos, will never be able to do such work again, Leahy aides told Al-Monitor. Her family has set up a crowdfunding site to help cover her hospital bills and medical evacuation but have only raised $48,000 of their $400,000 goal.

Secretary of State Mike Pompeo can legally override congressional holds on military assistance, but doing so would spark congressional ire and risk future funding cuts. The Donald Trump administration has so far respected such holds, while keeping in place Barack Obama-era rules that constrain the use of Egypt’s military aid for expensive defense purchases.

Similarly, the Associated Press reported last year that then-Secretary of State Rex Tillerson told Congress that Egypt had failed to protect free speech, grant US monitors access to Sinai or probe abuses by the army. And Vice President Mike Pence’s visit to Cairo in January appeared to be overshadowed by Egypt’s ongoing detention of two US citizens and Trump’s decision to declare Jerusalem as Israel’s capital.

The proposed freeze is not the first time Leahy has put Egypt’s human rights record under the microscope. In 2015, he placed a hold on nearly $66 million in military aid over potential violations by Egyptian units fighting in Sinai, after US officials said the US defense attache had been denied access to the area after reports of human rights abuses.

“They regard it as an infringement on their sovereignty,” Carnegie’s Dunne told Al-Monitor. “They just won’t come clean.”

Correction: May 4, 2018. This article has been updated to reflect that the State Department informed Congress it was withholding 15% of military aid to Egypt for Fiscal Year 2017 in January 2018. A previous withholding of 15 % announced in August 2017 applied to Fiscal Year 2016 funds.