Congress wants Cairo to compensate an American citizen who was grievously injured when Egyptian security forces attacked a tourist group with US-made weapons. 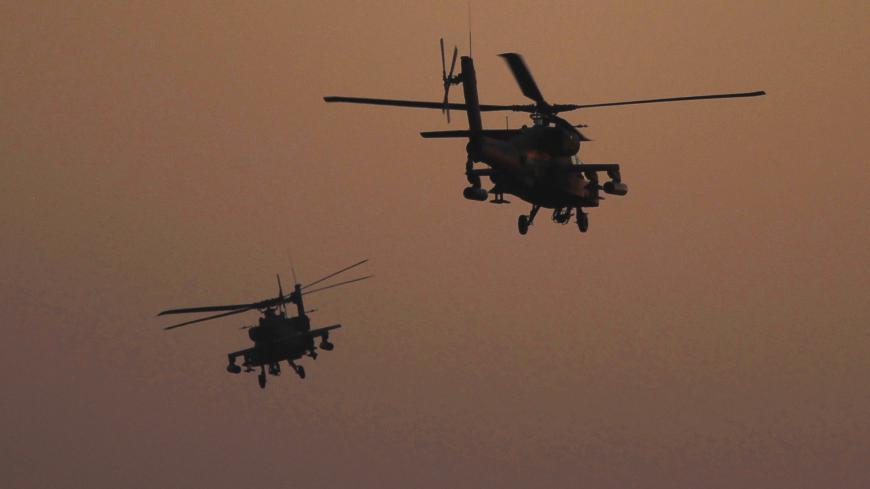 Apache helicopters fly over Tahrir Square during a protest to support the army, in Cairo, July 26, 2013. - REUTERS/Amr Abdallah Dalsh

April Corley was a champion roller skater until Egyptian security forces bombed her tour group using US-made helicopters in September 2015. The errant attack in the country’s Western Desert severely injured the American citizen and killed 12 others, including eight Mexicans and four Egyptians.

Annual foreign aid spending legislation advanced by the Senate Appropriations Committee on June 21 includes a provision directing Secretary of State Mike Pompeo to report to Congress on Egyptian efforts to “provide fair compensation to American citizen April Corely [sic] for injuries and losses sustained” during the attack. And last week the House Foreign Aid Panel attached report language to its version of the bill urging Pompeo to “as appropriate, press the government of Egypt to expeditiously resolve in a fair and just manner the claims arising from the … incident involving Egyptian security forces and American and Mexican nationals.”

Al-Monitor first reported last month that the top Democrat on the committee, Sen. Patrick Leahy, D-Vt., had placed a $105 million hold on military aid to Egypt earlier this year, in part because of Egypt’s failure to compensate Corley. Her family has set up a crowdfunding site to help her with $400,000 in medical bills, but to date it has only raised slightly more than $48,000.

Leahy is also demanding an investigation into the death of Italian graduate student Giulio Regeni, who was in Cairo researching labor unions when he disappeared under police surveillance in 2016. The Egyptian Embassy did not respond to Al-Monitor’s request for comment.

The spending bill for the current fiscal year, which expires Sept. 30, conditions $300 million of Egypt’s annual $1.3 billion in military aid on Cairo improving its human rights record. The secretary of state, however, can waive this requirement if he submits a report to Congress on Egypt’s failure to meet these conditions.

Senate appropriators have gone a step further in the pending bill for fiscal year 2019 by adding Egypt’s compliance with UN Security Council restrictions on North Korea to the human rights conditions, despite President Donald Trump’s recent summit with Kim Jong Un. Congress first demanded a report on Egypt’s military relationship with North Korea in the FY 2018 bill, but the pending FY 2019 Senate bill marks the first time lawmakers have tried to proactively withhold Egyptian military aid over the relationship.

In addition to the $105 million held by Leahy, the Trump administration withheld another $195 million in military aid to Egypt over its illicit purchases of North Korean weaponry last year.

While the Senate again seeks to cut Egyptian military aid from $1.3 billion to $1 billion, the upper chamber’s attempts to do so last year ran up against a wall with the more Cairo-friendly House. Once again, the pending House bill and report language contain none of the Senate’s conditions on military aid.

House lawmakers are hesitant to press Egyptian President Abdel Fattah al-Sisi on his human rights record because of his cooperation on counterterrorism and his friendly ties with Israel. Sisi ousted democratically elected President Mohammed Morsi, a Muslim Brotherhood member, in a 2013 coup.

“Egypt is a great ally,” Rep. Hal Rogers, R-Ky., the chairman of the House Foreign Aid Panel, told Al-Monitor. “They’re trying to bring stability to the government there. We wanted to be as helpful as we could.”

The report for Rogers’ bill “notes a portion of funds appropriated for assistance for Egypt in three prior fiscal years remain withheld from systems and programs that support Egypt’s military capabilities, including to combat real and ongoing terrorist threats.” It directs the State Department “to provide regular updates” to Congress on the withholdings to Egypt.

The House bill also seeks to delete a long-standing provision that withholds a portion of Egypt’s economic assistance based on how much US-funded pro-democracy nongovernmental organizations (NGOs) spend defending pro-democracy workers who were convicted in 2013 of operating without a license. The Senate bill maintains this restriction and only appropriates $75 million in economic aid to Egypt, versus $150 million in the House bill.

Sisi last year ratified legislation to further crack down on NGOs, which several lawmakers derided as “draconian.” Congress has placed conditions on Egyptian aid since the 2011 Arab Spring uprising against former President Hosni Mubarak — conditions that have never been certified as met under either the Barack Obama or Trump administrations.

by Murielle KASPRZAK and Joseph SCHMID | AFP | May 26, 2022
END_OF_DOCUMENT_TOKEN_TO_BE_REPLACED