Congress amps up pressure to free Americans jailed in Egypt

House lawmakers are demanding that the Donald Trump administration to take a firmer stance on Cairo’s human rights record. 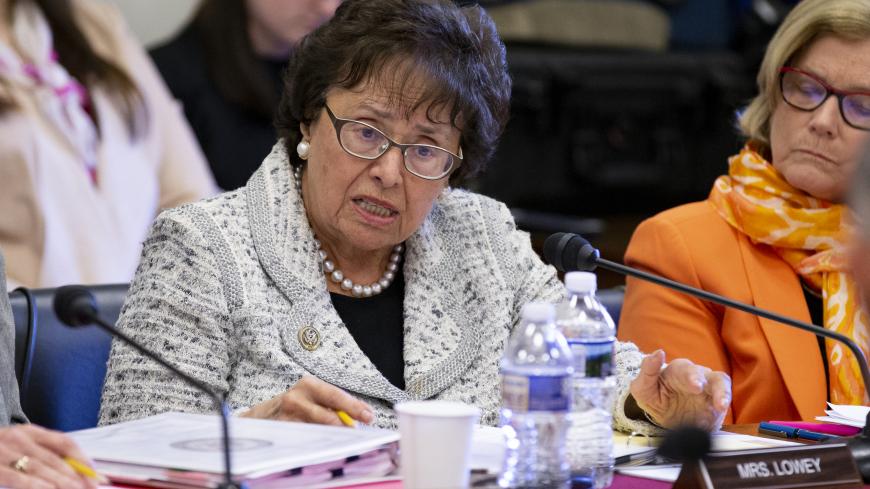 US Rep. Nita Lowey, D-N.Y., asks Environmental Protection Agency Administrator Scott Pruitt a question as he testifies before the House Appropriations Committee at the Capitol in Washington, April 26, 2018. - GETTY/Alex Edelman

Key House lawmakers of both parties are pressing the Donald Trump administration to demand that Egypt release detained US citizens and end its crackdown on civil society in a sign that the incoming Congress is serious about taking Cairo to task over its checkered human rights record.

More than 30 lawmakers so far have signed onto to the Dear Colleague letter to Secretary of State Mike Pompeo spearheaded by Rep. Ted Deutch, D-Fla., the top Democrat on the Middle East panel, and panel chairwoman Ileana Ros-Lehtinen, R-Fla. Among the signatories to date is incoming House Appropriations Committee Chairwoman Nita Lowey, D-N.Y., raising the possibility that the annual $1.3 billion US military aid package to Egypt might be used as leverage.

“Like you, we strongly believe that the US-Egypt bilateral relationship provides critical stability in an increasingly unstable region,” says the letter, which is set for release before the end of the month. “Nevertheless, we cannot ignore abuses of fundamental human rights, especially those directed at Americans.”

The letter notably presses Cairo to drop charges against American nongovernmental organization workers and pay the medical expenses of April Corley, a US citizen injured in a mistaken Egyptian airstrike in 2015. It also calls out Egypt for a recent spate of arrests of activists, bloggers and human rights advocates.

Despite the White House’s focus on freeing detained Americans, such as evangelical pastor Andrew Brunson, Pompeo has opted to lift a freeze on $195 million in foreign military financing to Egypt put in place by his predecessor. Pompeo acknowledged that Egypt’s human rights record “continues to deteriorate” in approving the release of the money, citing Cairo’s importance in providing Suez Canal access and overflight rights to the US military. Meanwhile, Egypt is believed to be detaining at least 15 American citizens and permanent residents, according to the letter.

The lawmakers specifically mention the case of former New York cab driver Moustafa Kassem, who was recently sentenced to 15 years in prison, while noting that Egypt released 27-year-old Ahmed Etiwy after five years of detention in May. They also pronounce themselves “disappointed” by Egypt’s refusal to pay for more than half the cost of the medevac for Corley, who “is in constant pain and will never be able to work again,” according to the letter. The California resident was once a professional rollerblader and appeared in music videos by Madonna and Chet Faker.

Experts tracking US policy on Egypt say the letter could be significant given the House’s past reluctance to slash military aid. Senate appropriators have previously sought to slash weapons assistance to $1 billion, only to be rebuffed by the lower chamber.

In particular, Lowey is seen as reluctant to cut aid, experts say, given Egypt’s close military ties with Israel. But advocates say Lowey has been receptive to learning about alleged Egyptian human rights abuses.

“It’s more likely to be the first shot across the bow rather than a clear indication that she’s ready to make fundamental changes to the house markup on Egypt,” said Andrew Miller, a former Egypt country director on the National Security Council during the Barack Obama administration. “The letter is worded in fairly restrained terms. It’s certainly not a screed against the Egyptian government. Her approach remains to address cooperation with the Egyptians.”

The House letter joins a bulging file of grievances over Egypt’s human rights record from Congress. In May, Vermont Sen. Patrick Leahy, the top Democrat on the higher chamber’s powerful spending panel, called on Egypt to meet a series of conditions to release $300 million in US weapons aid, including allowing American military monitors access to the Sinai, an investigation into the 2016 murder of Italian graduate student Giulio Regeni and the dismissal of the 2017 NGO law. Leahy is currently holding up $105 million in US military aid to Egypt over Kassem’s detention and Corley’s medical bills.

A House aide who spoke to Al-Monitor said the letter got an unusual push from grassroots advocates, including Aayah Hossam, the daughter of Egyptian-Americans Ola and Hosam Khalaf, who were detained by Cairo earlier this year. Hossam also wrote a letter to Vice President Mike Pence earlier this year.

The Trump administration itself may have fresh ammunition to call out Egypt’s human rights record. The Egyptian daily Mada Masr reported last month that President Abdel Fattah al-Sisi is seeking changes to the constitution that could abolish term limits for the head of state. And though Trump praised Sisi on the campaign trail in 2016, the affection cooled after his administration relocated the US Embassy in Israel to Jerusalem, rankling Cairo.

“I would be surprised if there wasn’t more focus on the Americans detained in Egypt,” said Miller, now with the Project on Middle East Democracy, a Washington think tank. “Any perception that the administration was going soft on the Egyptians there would elicit a very strong reaction from the House.”

Cairo will have another opportunity to mend US ties before the next Congress is seated in January. Egypt will retry 16 of 43 defendants in the nongovernmental organization trial Dec. 20.