Congress is pushing the Donald Trump administration to take a tougher line on Egypt amid concerns that President Abdel Fattah al-Sisi will use this week’s White House visit to legitimize his efforts to extend his rule through 2034. 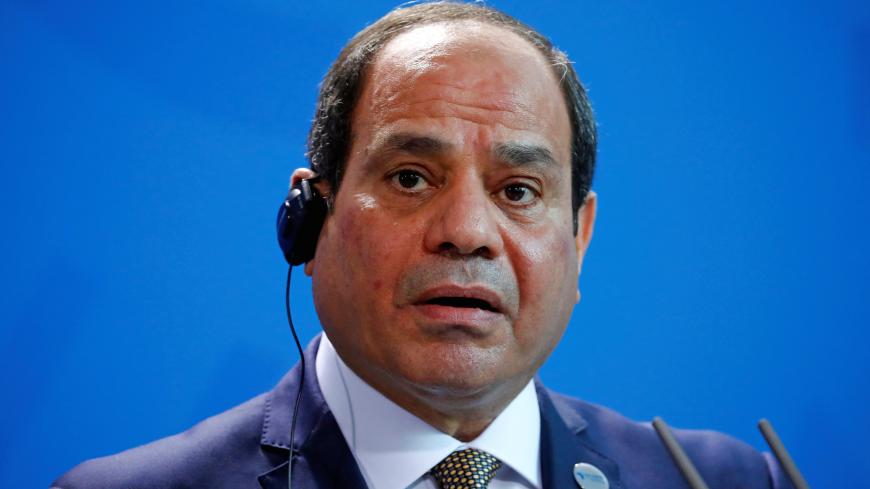 Congress is playing spoiler as the White House prepares to roll out the red carpet Tuesday for President Abdel Fattah al-Sisi as the Egyptian leader looks to extend his rule for the next decade and a half.

Sens. James Risch, R-Idaho, and Bob Menendez, D-N.J. — the chairman and top Democrat on the Senate Foreign Relations Committee, respectively — led 15 of their colleagues in a letter today pushing back against Cairo. The bipartisan group asked Secretary of State Mike Pompeo to address “three pressing issues” with Sisi during his visit this week: the potential term-limit extension, Cairo’s pending purchase of Russian fighter jets and what senators said were “at least a dozen” US citizens “unjustly detained” in Egypt.

“If adopted, proposed amendments to Egypt’s constitution that the parliament is currently considering would erode the independence of Egypt’s judiciary, giving President Sisi the power to hand-select the heads of judicial bodies, and may ultimately allow [him] to extend his rule until 2034,” the senators wrote in the letter. “The proposed amendments would also expand the military’s influence over government, politics and society.”

The senators also expressed particular concern over Egypt’s recent $2 billion contract to purchase 20 Su-35 aircraft from Russia, which could trigger US sanctions.

“As the United States provides significant military assistance to Egypt, we are concerned about their deepening relationship with Russia,” the senators wrote. That includes a $25 billion loan that Moscow has provided to build Egypt’s first nuclear power plant about 180 miles northwest of Cairo.

The White House vowed to press Sisi on US concerns during a press call today previewing his visit.

“We have been very frank and open with our Egyptian counterparts on the importance of continuing to develop Egyptian civil society,” a senior administration official said. “The president and the vice president, all the senior administration officials who will be interacting with Egyptian counterparts this week will continue to raise these cases, so that’s something we’ve remained very, very focused on.”

Several advocacy groups lobbied the foreign affairs panels in both chambers last month to raise the alarm over the proposed constitutional changes. The letter was a key ask at the second annual Egypt Advocacy Day, a coalition of groups critical of Sisi, including the Project on Middle East Democracy (POMED) and the Freedom Initiative, a nonprofit led by Egyptian American rights activist Mohamed Soltan.

A Senate staffer told Al-Monitor that Risch and Menendez pushed Egyptian Foreign Minister Sameh Shoukry on the Su-35 sale and the possible sanctions during a meeting on Capitol Hill last month that was also attended by Sen. Lindsey Graham, R-S.C., the chairman of the Senate Appropriations subcommittee on State and Foreign Operations. Pompeo also pushed Shoukry on the issue in March, POMED’s deputy director for policy, Andrew Miller, said during a recent call previewing Sisi’s visit.

“We don’t have a great deal of flexibility” under the law, the senior administration official said. “So countries that engage in those purchases need to know that we are extremely limited in what we can to mitigate and we have that situation with China.”

POMED’s Miller said such sanctions would “at the very least” apply to Egyptian defense officials who were “directly involved in the deal,” creating possible headaches for US military assistance.

“That could potentially create problems,” Miller said, “because if those individuals are sanctioned, they’re the same people who in theory are doing business with the United States and with US firms, and that can create some problems in terms of foreign military assistance.”

However, the Senate letter does not go so far as to threaten cutting the $1.3 billion in annual military aid, an effort spearheaded in recent years by Graham and Sen. Patrick Leahy, D-Vt., the top Democrat on the Appropriations Committee. Neither Graham nor Leahy signed onto this week’s Risch-Menendez letter.

Efforts to cut Egyptian Foreign Military Financing, which provides Cairo with US taxpayer funding to pay US military equipment, have historically faced opposition from pro-Israel lawmakers in the House. Indeed, the Risch-Menendez letter highlights the “strong, bipartisan support in Congress for a security partnership with Egypt” and commends Cairo for “its adherence to the peace treaty with Israel, its role in brokering cease-fires between Israel and Hamas, and its provision of military privileges to the United States."

Pressure from Capitol Hill has intensified as attorneys for April Corley, a US citizen grievously injured in an errant Egyptian airstrike on a group of tourists, lobby Congress and the Trump administration to pressure Cairo to reimburse her for her medical expenses. Corley beat Sisi to Washington last week, meeting with lawmakers, including Leahy and House Appropriations Chairwoman Nita Lowey, D-N.Y.

Leahy has notably asked the State Department to hold a proposed sale on Apache helicopters to Egypt until it pays Corley’s medical bills. And Lowey signed onto a letter last year denouncing Cairo for its detention of US citizens and failure to reimburse Corley.

Asked if House appropriators would be open to cutting Egyptian military aid, a committee staffer told Al-Monitor that “nothing is off the table.”