US shifts Egypt aid to other countries

The Barack Obama administration has reallocated $108 million in obstructed assistance. 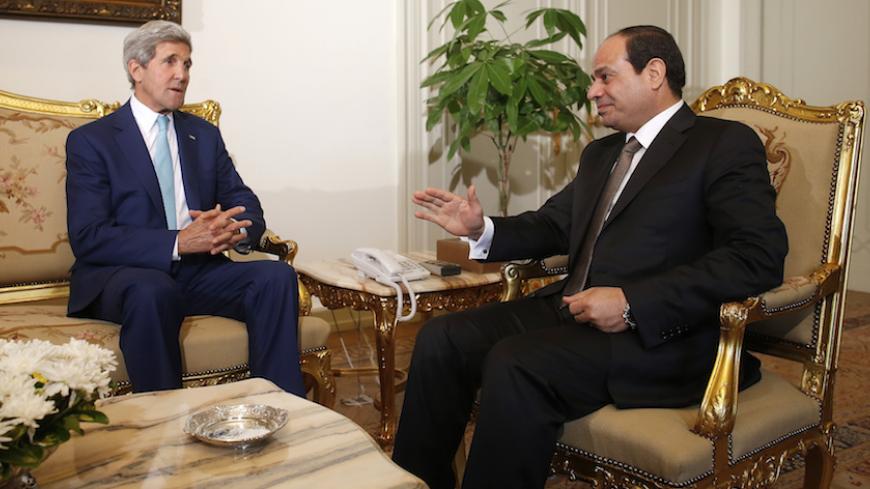 The Barack Obama administration shifted more than $100 million earmarked for Egypt to other countries earlier this year amid growing frustration with Cairo, Al-Monitor has learned.

The previously undisclosed reallocation is a signal of Washington's impatience with the Egyptian government's refusal to work with US aid organizations. The late spring transfer came as House members officially requested that the State Department transfer some of Egypt's funding to Tunisia, which some lawmakers view as more deserving of US assistance following its fledgling transition to democracy.

"The US government redirected $108 million in planned assistance funding from Egypt to other countries due to continued government of Egypt process delays that have impeded the effective implementation of several programs," a State Department official told Al-Monitor in an emailed statement. "These funds have been redirected according to other priorities and needs."

The Egyptian Embassy in Washington did not respond to a request for comment.

The decision follows a February 2015 Government Accountability Office report that identified $460 million in economic assistance for Egypt that remained unspent because of US restrictions and Egyptian red tape. Since then, Cairo has continued to deny permits that US aid recipients need to operate in the country, while certain media outlets have launched a smear campaign against US nongovernmental organizations such as the North Carolina-based Research Triangle Institute.

In late May, eight key House members of both parties wrote to Secretary of State John Kerry asking him to reprogram up to $20 million in Egypt aid to Tunisia.

"Tunisia recently established a democratically elected parliament and accomplished the region's first peaceful transfer of executive power," the letter stated. "At such a critical moment, the United States should make a serious effort to support this nascent democracy."

Ros-Lehtinen has long been critical of how US assistance to Egypt is being spent and requested last year's Government Accountability Office report along with Rep. Gerry Connolly, D-Va. McCaul for his part led a congressional delegation to Tunisia in May and vowed to help the country defeat violent extremism after it emerged that Tunisians are more likely than people of any other nationality to join the Islamic State.

The congressional letter argues that the extra aid would help Tunisia "advance transparency and professionalism in parliament and other institutions while reforming banking laws, tax code, and other rules and regulations that deter entrepreneurs and investors." It offers only muted criticism of Egypt, other than to point out that "even long-standing programs have stalled."

The State Department replied a month later with a letter rejecting lawmakers' request for more money for Tunisia. The response doesn't mention other countries, but the reallocation appears to have happened around the same time.

"At this time, we believe our Economic Support Funds programs meet US policy objectives and are aligned with the needs of the government of Tunisia," Assistant Secretary of State for Legislative Affairs Julia Frifield wrote. "To ensure we are addressing Tunisia's needs and using regional Economic Support Funds most efficiently, we continually review the performance of our assistance portfolios."

Her response didn't go over well with Congress.

"Tunisia should have been prioritized for this reallocation," Royce told Al-Monitor in an emailed statement. "Tunisia, the region’s first democratically elected government, is a key partner in our fight against radical Islamist terrorism and faces serious threats from [the Islamic State] as well as severe political and economic challenges."

The State Department has asked Congress for $140 million for the fiscal year that started Oct. 1, on par with last year's request and more than double the previous year's. Tunisia's ambassador to Washington, Faycal Gouia, told Al-Monitor in March that he would fight to increase US aid by $20 million to boost security assistance, which is down $10 million over last year's request.

Several sources told Al-Monitor that Burma is one of several countries where the reallocated aid to Egypt ended up. The Obama administration lifted trade sanctions against the former military dictatorship earlier this month and is keen on seeing it flourish into a successful democracy.