How Turkey’s recent political shakeup will have wide-ranging impact

The resignation of Turkish Prime Minister Ahmed Davutoglu could affect both the country’s economy and anti-IS efforts; new report scrutinizes US military aid to Egypt as human rights abuses persist; Al-Monitor’s reporter in the news. 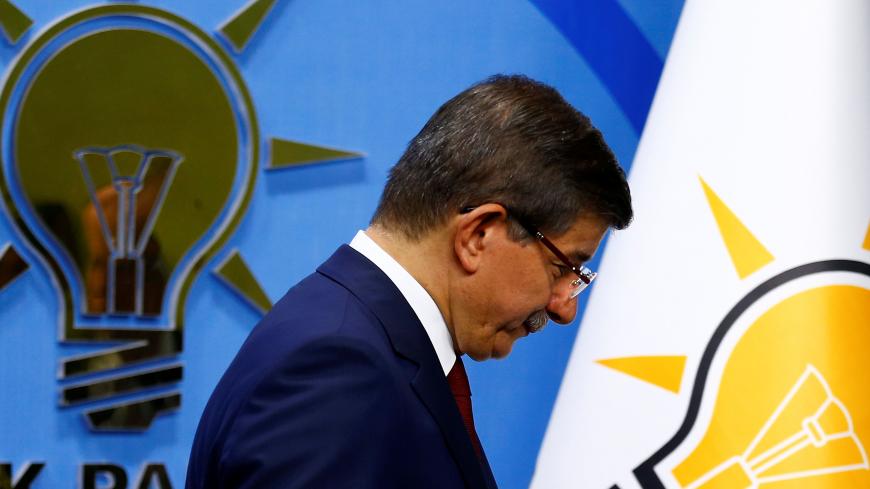 Following Prime Minister Ahmet Davutoglu’s announcement May 5 that he was resigning as head of the ruling Justice and Development Party (AKP) and giving up the premiership, President Recep Tayyip Erdogan continues to consolidate power.

Mustafa Akyol writes, “It can be safely said that Davutoglu's departure marks even greater concentration of power in the hands of Erdogan. The new power structure includes a new Erdoganist narrative, in which obedience to the leader is openly praised as a virtue — and required as a duty.”

Akyol notes that Turkish media has been awash with praise for Erdogan, with Ankara Mayor Melih Gokcek saying, “Obedience to the leader is a must,” while others have invoked verses from the Quran to justify the president’s uncontested dominance.

Yet as Erdogan and his supporters work to further boost the president’s strength, the country faces serious challenges on the security and economic fronts.

Cengiz Candar reports on Turkey’s failed efforts to protect the city of Kilis on the Syrian border from incoming missiles attacks from Syria. He writes that the assaults, which have been going on since January, “have taken the lives of 21 people, including eight Syrian refugees, and wounded scores of others. Many buildings have been devastated. The people mostly remain indoors, day and night.”

While Erdogan has said that Turkey will continue to respond to the rocket fire, Candar says, “Whether IS really is suffering remains to be seen. Although the Turkish army pounds the other side of the border with howitzers, IS fighters drive close to the border with pickup truck-mounted Katyusha rocket launchers, fire them on Kilis, then drive away and disappear.”

Candar notes that Ankara’s strained ties with Washington and Moscow preclude any easy solution. He argues that putting an end to the attacks would require creating a buffer zone to push IS away, something for which Turkey would need “American cooperation and tacit Russian endorsement.”

“Kills is a clear testimony to Turkey’s powerlessness in its ambition to be recognized as a regional power,” he concludes.

Meanwhile, Kerim Karakaya argues that Davutoglu’s departure could have serious repercussions on the economy.

“Economic policies will be affected by Davutoglu's departure and Erdogan's full control over the ruling AKP. Davutoglu and his deputy prime minister for economic affairs, Mehmet Simsek, had defended traditional economic policies emphasizing budgetary discipline and structural reform aimed at gaining the confidence of stock markets. On the other hand, Erdogan and his economic aides, contrary to conventional wisdom, claimed lower interest rates would mean lower inflation and contribute to economic growth. This economic concept, dubbed ‘Erdoganomics,’ focuses on growth through infrastructure, investments in construction and domestic consumption,” he writes.

Erdogan has tried to reassure the country following a market tumble in the wake of the outgoing prime minister’s announcement, but ambiguity about his policies has caused concerned. “International investment banks, because of the political commotion in the country, foresee that Turkish lira assets might be negatively affected. Commerzbank, JP Morgan and Morgan Stanley have advised a lowering of positions in Turkish assets.”

Billions in military aid to Egypt unaccounted for

A new report from the US Government Accountability Office (GAO) shows the Egyptian government is hindering Washington’s ability to track billions of dollars of military aid sent to Cairo.

Julian Pecquet reports that the GAO “asserts that the Obama administration has often failed to meet those requirements due to resistance from their Egyptian counterparts, lack of guidance from Washington and insufficient staffing at the US Embassy in Cairo.”

Pecquet writes, “Among the report's key findings: Egyptian officials hindered US officials' efforts to confirm that US equipment such as Stinger rocket launchers and night-vision goggles were used appropriately; the DOD could not document that it completed end-use monitoring prior to 2015; and the State Department has yet to establish a process for conducting human rights vetting when providing equipment to Egyptian military units, despite agreeing to do so in 2011.”

This comes at a time when Egypt is facing mounting security challenges in its fight against extremist groups. On May 8, eight plainclothes policemen were killed in an attack in southern Cairo. Shortly thereafter the Islamic State (IS) claimed responsibility for the ambush.

Reporting on the incident, Ahmed Hidji spoke with Gen. Mohammed Matar, the former director of security for North Sinai province, an epicenter of terror group activity in the country. “Matar told Al-Monitor that Egyptian army operations have succeeded in eliminating many terrorist outposts. This has prompted IS to prove its existence by hindering Egyptian security efforts and showing that it is capable of hitting different areas in Egypt, including the capital.”

Yet while Cairo argues that the US aid — amounting to $1.3 billion annually — is vital to its security efforts, recent crackdowns on freedoms have provoked calls to rethink the assistance.

Pecquet adds, “One of the most damaging findings of the report could be its assertion that the State and Defense departments are not in compliance with congressional human rights vetting requirements for military training and equipment.”

Earlier this month security services raided the Journalists' Syndicate in Cairo and arrested two journalists, and on May 14 Egyptian courts sentenced to prison over 150 people who took part in protests last month against the transfer of two Red Sea islands to Saudi Arabia.

Al-Monitor in the news

We at Al-Monitor are proud of all of our authors. Their determined work brings attention to subjects well known and little known and others somewhere in between. Based across the Middle East and in the United States, our authors bring their knowledge and sometimes their opinions to their stories. Al-Monitor is at its best when our authors’ reporting starts conversations.

Our coverage naturally centers on our authors’ reporting, but recently, one of our reporters became the story. In a May 5 article in the New York Times Magazine about Ben Rhodes, the White House’s deputy national security adviser for strategic communications, an administration official singled out our diplomatic correspondent, Laura Rozen, as a carrier of the administration’s message. The official’s point, as we take it, was to describe the manner in which Rhodes used media outlets to shape a story, although we think it is hardly newsworthy that the press and communications department would have such an objective.

We disagree with the implication that our authors are parrots. We and our readers know that Al-Monitor's authors do no one’s bidding. Rozen, through her reporting for Al-Monitor and on her Twitter feed, gave voice to the administration in its negotiation of the Iranian nuclear deal. Rozen also gave voice to those on the other side of the bargaining table as well as to those who supported and, yes, opposed the administration's stance.

Al-Monitor was founded with a mission to cover the Middle East differently from traditional media. Rozen’s coverage isn’t an outlier at Al-Monitor. All of our authors cover their issues as fervently as she does, which means we are regularly at the forefront of developments in the region. It was a surprise to read the characterization of Rozen’s reporting given that many distinguished journalists, both columnists and opinion writers, at the New York Times and other respected outlets, have shared that Al-Monitor is a part of their regular reading list, praising the quality content and recognizing our role as a pioneer in detecting trends in the Middle East.

This article has been updated.