As Davutoglu exits, Erdoganists demand 'obedience to the leader'

The departure of Ahmet Davutoglu as prime minister marks the opening of a new narrative that makes obedience to President Recep Tayyip Erdogan a religious duty. 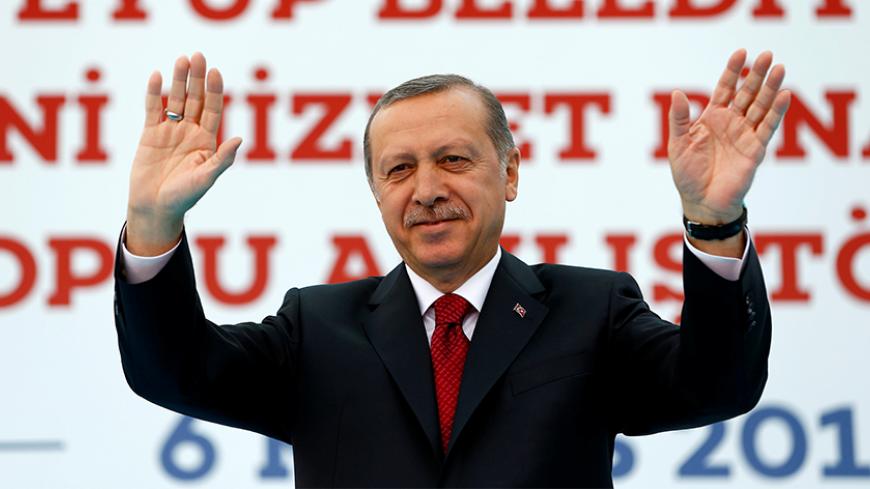 These days, Turkey’s Prime Minister Ahmet Davutoglu is making farewell visits to the heads of various state institutions, from the military to the Directorate of Religious Affairs. On May 22, at the snap congress of the ruling Justice and Development Party (AKP), he will be replaced by a new party chair and a new prime minister. All of Turkey knows by now that this new man will keep a low profile and be fully obedient to the master of the show: President Recep Tayyip Erdogan.

It can be safely said that Davutoglu's departure marks even greater concentration of power in the hands of Erdogan. The new power structure includes a new Erdoganist narrative, in which obedience to the leader is openly praised as a virtue — and required as a duty.

One example of this narrative came from Ankara Mayor Melih Gokcek in a lead article published by Anadolu, one of the many pro-Erdogan newspapers that has popped up lately. “Obedience to the leader is a must,” the headline read, quoting Gokcek. “The concept of a leader and absolute obedience to this leader exists in our faith, in our state tradition,” Gokcek said. “The leader can make mistakes … yet still the decision he makes … must be obeyed.”

Apparently, this obedience is an obligation for not just the party, but also the pro-AKP media world, which now makes up the majority of Turkish media outlets. In Aksam, columnist Markar Esayan underlined the nation’s unbreakable love for Erdogan, thanks to his “manliness, faith, success, courage.” This love, which he personally shares, is the “steel core of the cause,” Esayan wrote. It was so strong that it could not be weakened by “sinister [criticism] such as authoritarianism, patriarchy, cult of the leader, dictatorship or corruption.” Finally, Esayan explained how his love must be expressed by himself and all other Erdogan lovers: “Let everybody be comfortable and keep his eye on the chief. Are we not a huge orchestra looking in the eyes of its conductor? Can this work be done any other way?”

Another pro-Erdogan pundit, Kadir Misiroglu, 83, who has been known for decades for his fez-wearing Ottomanism, took the narrative to a more theological level. In a speech presented on his popular website and that soon made its way around the web, Misirlioglu condemned Davutoglu for not being fully “obedient” to Erdogan. “He saw obedience as being low,” Misirlioglu commented, “just like Satan, who refused to prostrate in front of Adam.” This was a reference to a Quranic story in which God tells Satan to bow down to Adam, but Satan refuses out of arrogance, only to be condemned forever. To him, Davutoglu had shown satanic arrogance, just like all others who refuse to obey Erdogan.

In the social media world, which is a major component of Turkey’s political scene, calls for “obedience to the leader,” in a clear reference to Erdogan, have become common. There are dozens of popular Twitter feeds, some with hundreds of thousands of followers, devoted to the veneration of the “Chief” and the demonization of his “enemies” and “traitors.” One their recent mottos read, “Whatever the Chief says, that is it.”

A reference used by some of these propaganda outlets is the Quranic verse 4:59, which reads, “O you who have believed, obey Allah and obey the messenger and those in authority among you.” The authority here is taken as Erdogan. A pro-Erdogan Twitter user who recently ran for AKP deputy even offered a chilling interpretation of the verse: “The chief is the head of this state, and those who do not obey him will lose both this world and the afterlife!”

All this suggests that the AKP, and especially “Erdoganism” as its latter-day ideology, may be classified as “Islamist,” in the sense of being a synthesizer of Islam and politics. While the aim of this self-styled Islamism may not be abolishing the secularism principle in the Turkish Constitution and establishing an “Islamic state,” it heavily uses religious themes to glorify the rule of Erdogan. It makes Islam serve an authoritarian project centered on a cult of personality.

Luckily, that is not the only view of Islam that is being expressed in contemporary Turkey. There are also Islamic voices that extract not authoritarian but liberal messages from Islam. One example is a recent piece by former Istanbul Mufti Mustafa Cagrici, who writes a weekly column in Karar, a paper that has lately become an object of hate by hard-core Erdoganists. Under the headline “The Cultural Background of Authoritarian Governments,” Cagrici argued that an authoritarian political culture dominated Islam since its first century, and was not an expression but a perversion of the religion. Today Muslims need, he noted, “freedom and the culture of criticism,” which “did not exist in traditional society.”

Etyen Mahcupyan, a former adviser to Davutoglu who also writes for Karar, also pointed to these two different trends in Turkish political Islam. On the one hand, there were the more numerous “Chiefists,” or hard-core Erdoganists, and on the other there was a smaller segment of “well-educated, urban, upper-middle class, new-generation, globally minded conservatives” who had more love for Davutoglu. Not surprisingly, after writing this, Mahcupyan was chided by Erdoganists for “elitism.”

The future of Turkey will be partly defined by which of these two different understandings of Islam will become definitive. The good news is that the authoritarian one is not the only option. The bad news is that, at least at this point, it is the more powerful and assertive.