How ambitions of 'Islamist cult' united Islamists, secularists in Turkey

The ambitions of the Gulenists have been able to bring Turkey’s Islamists and secularists together for the first time in the country's political history. 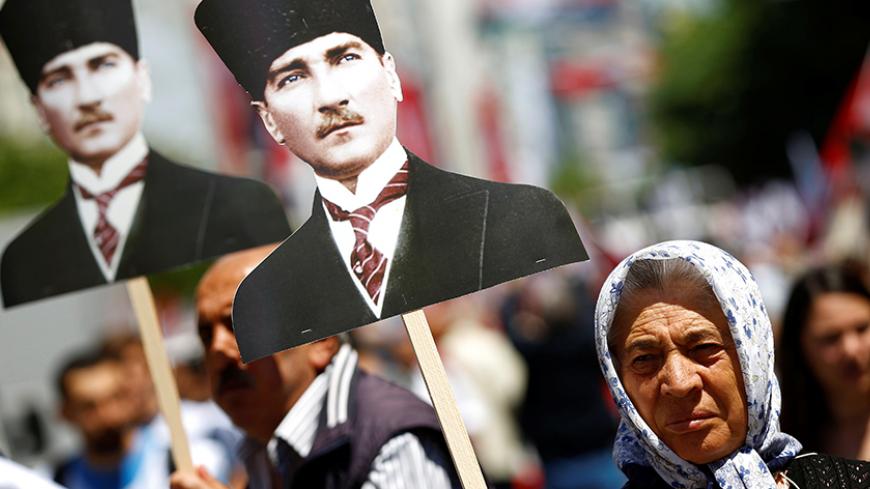 In the biggest mass rally of Turkish political history, more than 1 million Turks — even 3 million by some estimates — gathered in Istanbul Aug. 7 to denounce the July 15 attempted coup. This, naturally, was widely reported by the Western media, with a focus on the man who led the rally: President Recep Tayyip Erdogan. “Turkey's Erdogan stages mass rally in show of strength after coup attempt,” read a Reuters headline. “Crowds gather in Istanbul for massive pro-Erdogan rally,” reported Deutsche Welle. For Voice of America, too, the news was a “Massive rally in Turkey in support of Erdogan.”

The reality on the ground, however, was less Erdogan-centric. Turkey’s powerful president was of course the biggest star of the show, but what made the rally so significant was the participation of two opposition leaders: Kemal Kilicdaroglu, the leader of the main opposition Republican People’s Party (CHP), and Devlet Bahceli, the leader of the Nationalist Action Party. The presence of the CHP — the “Ataturk party,” the traditional guardian of secularism — was very significant. It was a strong symbol that the current political fault line in Turkey is not about Islam versus secularism, as it often is. It is rather about the defense of the democratic system against the putschists — who were identified by all leaders who spoke at the rally as FETO, or the Fethullah Gulen Terror Organization.

Hence, the rally was quite colorful in terms of the participants. Among the millions who poured into the streets in Istanbul, as well as Ankara, Izmir and other major cities, there were people from all walks of life. Erdogan supporters probably made up the biggest chunk; there were as many unveiled women as those wearing the veil, and Islamists were joined by pop stars, models, actors and actresses, and even Turkey’s chief rabbi. Secular media, too, was as supportive as the Islamist media. Hard-core secular and often fiercely anti-Erdogan daily Sozcu came out the next day with a huge headline that supported the rally, vowing “One nation, one flag.”

Why is this the case? Why are Turkey’s secularists now standing with Erdogan, whom they have repeatedly blamed for Islamism and authoritarianism?

There are two answers to this question. First, the July 15 coup plot was perceived as an attack on not merely Erdogan and his ruling Justice and Development Party (AKP), but the whole nation. The putschists bombed the Turkish parliament, the very symbol of the nation, at a time when the deputies from four major parties were inside. It is unfortunate that one of those parties, the pro-Kurdish Peoples' Democratic Party (HDP), was not invited to the rally despite its stance against the coup. The problem is HDP’s image as a party that “supports terrorism,” in reference to the violent attacks by Kurdish militants. The putschists also killed more than 100 civilians who resisted them, revealing a ruthlessness that enraged the whole nation.

Second, Turkey’s secularists realized that the coup plot was the work of the Gulenists, who are loathed by most and feared more than the Erdoganists. For observers in the West, this might be hard to comprehend, for there the Gulenist community has a largely positive image, if any, as a moderate Islamic group that preaches love, tolerance and dialogue. In Turkey, however, almost everybody knows that beyond this facade, the group has been hell-bent on dominating the state through subversion and has been notorious for exploiting key state institutions to purge or even imprison those who stand in its way.

In particular, most Turkish secularists hold a grudge against the Gulenists for massive witch hunts on secularists, which imprisoned hundreds of secularist officers and their allies between 2007 and 2013. At that time, the Gulenists and the AKP were allies, and the latter can also be held responsible for the now notorious cases known as “Ergenekon” and “Sledgehammer.” Yet it was clear that the Gulenists were the more aggressive party in this alliance, and they were the ones responsible for forged evidence, as proven later by the work of Harvard professor Dani Rodrik, along with several Turkish journalists. (See also the Al-Monitor interview with former police chief Hanefi Avci on Gulenists and their “parallel state.”)

Turkey’s Kurds, too, hold an understandable grudge against the Gulenists, who have arrested thousands of Kurdish activists during the Kurdistan Communities Union investigations of 2011-12, often with inflated charges. Gulenists have also been quite suspicious of — and often active against — the now failed “peace process” between the AKP government and Kurdish militants, giving them infamy among Turkey’s Kurds and peacenik liberals.

Hence, when the AKP-Gulenist alliance finally broke apart in late 2013 and turned into open political war, I asked a prominent secular, left-wing Turkish journalist, “Which side do you despise more?” He responded, “The Gulenists are a bigger threat, for we can vote out Erdogan, but once these guys capture the state, there is no way to get rid of them.” He said that he was more worried about being imprisoned by the Gulenist police and judiciary than by the AKP government.

That's why Turkey’s secularists are now siding with Erdogan against the Gulenists, who made themselves the national enemy with the bloody coup plot. This, of course, does not mean that secular worries about Erdogan and his Islamist vision will be over. There is also no guarantee that the spirit of national unity presented in the united anti-coup rally will endure. Yet it is still significant that the ambitions of an Islamist cult have been able to bring Turkey’s Islamists and secularists together for the first time in recent history.