Why Islamists are no longer Erdogan’s favorites

Turkey’s new ruling ideology is Erdoganism, and its critics include some Islamists who now find themselves in the “traitor” category. 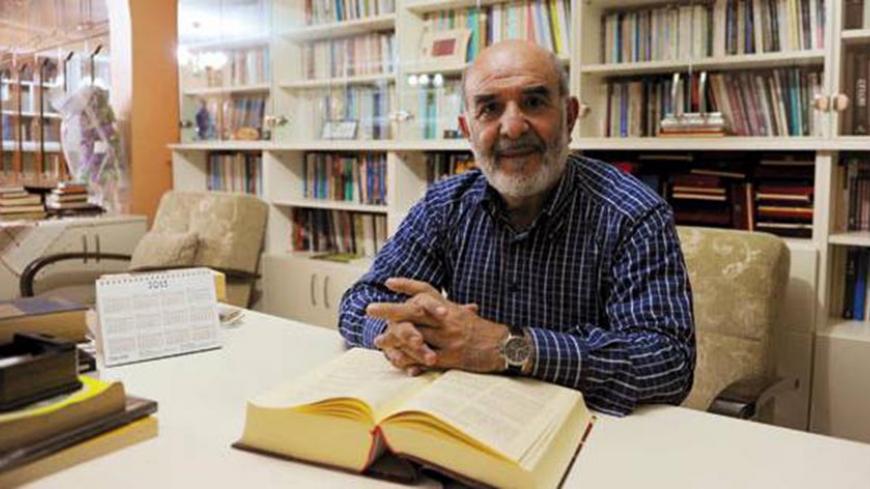 The writer Ahmet Tasgetiren is one of a number of prominent Islamists who have been targeted recently for criticizing President Erdogan. Tasgetiren, seen in a photo uploaded on Facebook on Aug. 14, 2013, wrote about the president in his column in the daily Star. - Facebook/AhmetTasgetiren

There is a new theme these days in Turkey's hard-core pro-Erdogan media: The unreliability of opinion leaders or activists who have led Turkey’s Islamist movement for decades, and who have also been strong supporters of the ruling Justice and Development Party (AKP) and President Recep Tayyip Erdogan. Lately, some prominent Islamists have raised criticism about “corruption by power” in the ruling circles. The Islamists also have criticized the pro-Erdogan propaganda machine, which intimidates, threatens and libels any critic of the president. Although all these Islamist critics used as friendly and respectful a tone as possible, they could not escape being labeled as disloyal or treacherous.

One dramatic example of this Islamist disenchantment with Erdoganism was a piece by Ismail Kilicarslan, a veteran pundit in Turkey’s Islamist movement, in the daily Yeni Safak. Titled “O Chief, we are so depressed,” the piece was an emotional open letter to Erdogan — who is now commonly called “the Chief” by his supporters. Kilicarslan listed a few recent examples of “immorality” he saw in the rhetoric of some hard-core Erdoganists and noted that he feels “shame” to be in the same camp with those people. He also said that he is sick of being called a traitor (or “crypto Gulenist”) from the ruling zealotry whenever he raises such complaints.

Erdogan naturally did not give any answer to this open letter, which went viral in social media. But the hard-core Erdoganists in question gave an answer: Kilicarslan’s dissent was just another example of how unreliable some of these Islamists are. They are arrogant people who don’t understand the value of Erdogan, and who do not appreciate the privileges they have “only thanks to Erdogan.”

A particular website that carries out this hard-core Erdoganist propaganda is www.duvardibi.tv, which is conspicuously anonymous, but it is widely believed to be the “killer website” of the clique that had also penned the mysterious blog that practically ended Ahmet Davutoglu's time as prime minister in May. Its posts are all about exposing and defaming the covert dissidents of Erdogan in the AKP universe. Besides Kilicarslan, their recent targets include Ahmet Tasgetiren, a very prominent Islamist writer and community leader, who also dared to raise in his column constructive criticism of Erdogan in the daily Star. Another usual target is the daily Karar, a mildly pro-AKP newspaper that was founded in early 2016 by prominent journalists in the Islamist movement such as Mustafa Karaalioglu and Yusuf Ziya Comert. The Duvarbidi website condemns the daily Karar team as “Davutoglu fans” who act as a Trojan horse within a movement whose sole leader is, and must be, Erdogan.

Does this mean that Turkey’s Islamists are no longer supporting Erdogan? No, that would be a misleading conclusion. Most Islamists still support the Erdogan regime, at least publicly, and the hard-core pro-Erdogan propaganda machine includes some Islamists as well. But the same propaganda machine also includes some overtly secular people — former Marxists, nationalists, mere opportunists, some Kurds and even an Armenian. Their common ground is not Islamism, but Erdoganism, which is now an ideological position of its own.

Erdoganism seems to have two simple rules for itself: First, Erdogan is always right. Second, all critics and dissidents of Erdogan are unpatriotic people, who knowingly or unknowingly serve the evil Western powers that conspire against Turkey. All the rest follow from these two axioms.

The anti-Westernism in this ideological blueprint appeals to most Islamists, but they sometimes seem to have a problem with the first rule — that Erdogan is always right. After all, they have certain ideological positions of their own, to which the ever-pragmatic Erdogan may not always subscribe. For example, Erdogan’s June 2016 reconciliation with Israel, which came with the official forsaking of the legal claims of the families of the Mavi Marmara victims, came as a shock to Islamists — especially when Erdogan suddenly disowned the Gaza flotilla campaign that he had championed for years in political rallies. Erdogan’s silent abandonment of the Syrian revolution by cozying up with Russia and accepting to live with the Assad regime also disillusioned some Islamists who have been eager to see a post-Assad Syria.

Besides such foreign policy issues, some veteran Islamists of Turkey seem genuinely concerned with the blunt corruption, nepotism and authoritarianism that has more and more characterized the current regime. They see, with disillusionment, that all the ugly aspects of old secular Turkey that they once criticized are now revived under Islamic garb — perhaps only in uglier and more aggressive forms.

One of these veterans, Kemal Ozturk, another columnist for Yeni Safak, wrote a nostalgic piece titled “What is left of journalism.” He wrote that during the '90s, when Islamists were in the opposition and their media had intellectual depth and professional ethics. They had "sincerity and quality." But now, with power, that age of innocence is gone. "It is just like a flood came and took away all the values we had accumulated," Ozturk wrote. For him, this was quite evident in the new propaganda machine, "which throws libels against everyone other than itself, and creates an aura of hatred." In return, Ozturk found himself among the “treacherous Islamists” listed by the Duvardibi website.

The tragedy of these disillusioned Turkish Islamists is that they don’t have much of an option. All their life, from jobs to friends to social network, is within the conservative-Islamic camp of Turkey, which is today almost totally dominated by Erdogan and his enthusiasts. That is why their timid criticisms of the current regime target hard-core Erdoganists — especially the new recruits with a secular background — but never Erdogan himself. They act as if “the Chief” is surrounded by some bad people, and that is the only problem at hand.

“The Chief” himself, however, may have a more realistic sense of the reality. To further consolidate his rule, he does not need Islamists or adherents of any other abstract idea. He just needs Erdoganists, plain and simple. And there are plenty of them, coming from all backgrounds and identities, who are ready to outperform the good old Islamists.