Is 'Erdoganism' threat to Turkey's Islamism?

Some commentators in Turkey’s Islamist movement are increasingly worried by President Recep Tayyip Erdogan’s ongoing accumulation of power and the fervor of his followers. 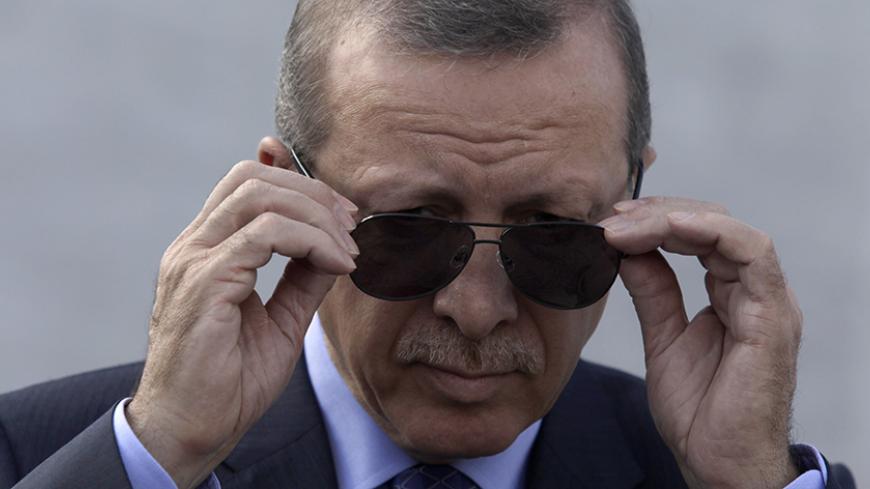 The term “Islamism” typically refers to political movements or parties that aim to Islamize society through the instruments of the state. In this sense, Islamism is inherently authoritarian, especially when it tries to impose Islamic law (Sharia) on people who are opposed to it. Islamist parties, however, are not necessarily hierarchical in their structure and are often devoid of charismatic “supreme leaders” who dictate terms and conditions to members. For example, according to one report, the Muslim Brotherhood in Egypt views itself “not as a political party directed by a single chairman, but as a cohesive 'society' that operates on the basis of internal consultation.”

In Turkey, the Justice and Development Party (AKP) was established in 2001 as an organization promising “internal consultation,” and it even envisioned systemic turnover of political elites through a self-imposed parliamentary limit of three terms. Gradually, however, it turned into a “political party directed by a single chairman” — Erdogan. The party’s term limit provision has remained valid and applicable to everyone — that is, everyone except Erdogan. Because Erdogan is now formally a “nonpartisan” president, the AKP’s by-laws conveniently do not apply to him, but he still controls the party.

Moreover, as of late, pro-Erdogan propaganda, to which almost half the Turkish media is now fully devoted, has taken the shape of a cult of personality, which is also not a typical Islamist phenomenon. A recent book, “Recep Tayyip Erdogan: The Sun of the Age,” proudly refers to him as “an idol for our youth,” which would sound bizarre, if not heretical, to the average Islamist. In 2011, an AKP deputy declared, “Even touching Erdogan is a form of worship,” and in 2014 another AKP deputy proclaimed that Erdogan “carries all the attributes of Allah in himself.” Such views, heretical from a traditional Islamic perspective, were criticized and ridiculed by Erdogan’s opponents, but he conspicuously said nothing.

The staunchly pro-Erdogan pundits in the Turkish media, who are crucial to Erdogan’s ability to maintain his grip on power, are another point of interest. Some of these people are Islamists for sure, but others are secular figures who praise Erdogan, for the sake of “democracy,” for making Turkey a powerful country and crushing the “traitors” of the nation. Notably, some of these secular pundits have become pro-Erdogan only in the past few years and have outdone most Islamists in the ranks of the AKP in their zeal to defend the “founding leader of New Turkey.”

Meanwhile, some of the more mainstream pundits within Turkey’s Islamist movement seem disturbed or disillusioned by Erdogan’s incessant accumulation of power and the zeal of his latter-day recruits. One such figure, Hakan Albayrak, one of the leading activists in the 2010 Gaza flotilla, wrote a critical open letter to Erdogan March 22 in his new Islamist daily, Dirilis Postasi. The letter — under the heading “Don't do this chief, for God’s sake!” — implored of Erdogan, the “chief,” not to interfere in every affair of the Ahmet Davutoglu government. Albayrak was nonetheless supportive of Erdogan, but longed for the days when he shared power with other figures, among them former President Abdullah Gul, “who was giving a sense of trust to everybody, even our rivals.”

Albayrak soon learned that even the most respectful of criticism is unwelcome. A website operated by the Sabah group, i.e., Team Erdogan headquarters, accused him and two other similarly supportive-but-critical journalists of “treachery” against Erdogan, “the leader of a struggle awaited for a century.” Moreover, a writer for Dirilis Postasi resigned in protest, complaining that “whomever wants to give guidance and fine tuning from outside [to Erdogan] is [branded] a supporter of tutelage, a junta.” In other words, mere criticism of Erdogan is tantamount to a military coup, the logic being that since Erdogan was elected “by the people,” his critics are showing disrespect for the people and the people’s rule.

There are several other examples of such intra-media spats and purges in Turkey, and a clear pattern has been established: Critical supporters of Erdogan will be replaced by uncritical supporters of Erdogan. Whether one is an Islamist is not an issue. The only criterion is loyalty to and enthusiasm for Erdogan. The older generation of Islamists who have their own set of values, do not fare well according to this criterion, and therefore are naturally replaced by apparatchiks eager to prove themselves to the supreme leader.

Sibel Eraslan, a member of the older generation of Islamists and a novelist and columnist, wrote a notable piece, “Leaving New Turkey to its new owners,” which ran March 27 in the Daily Star. She wrote that the era of “a generation that saw politics as a cause, by associating it with a mission and values” appears to be over. “The heart, the conscience, the effort” is no longer valued, she wrote, implying that the only rule in town is Machiavellianism. The time is ripe to leave the scene to its new masters, she observed before closing with a quote from the Quran (76:9): “We wish from you neither reward nor gratitude.”