After political shake-up, is Turkey heading for economic crisis? 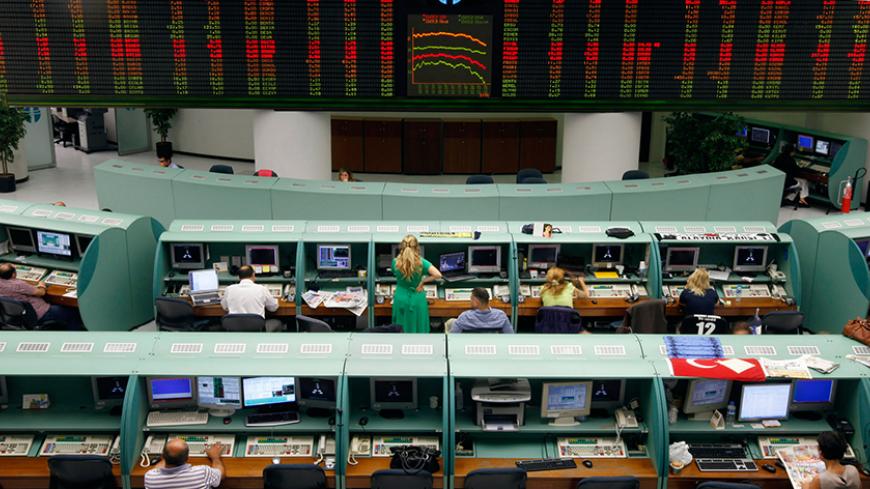 As Turkish markets shook after the May 5 announcement of Ahmet Davutoglu's resignation as prime minister, President Recep Tayyip Erdogan came out with his typical defiant tone when he said, "There are those who pray for an economic crisis. Those who dream of adding to their wealth [in an economic crisis] won't be able to do so."

Markets received news of Davutoglu's departure as yet another political uncertainty; the Istanbul stock market lost 8% of its value in one week. The dollar exchange rate, which was $1 to 2.80 Turkish liras on May 4, climbed to 2.97 Turkish lira in one day. It was the first time since 2001 that the markets were so negatively affected by an apparent rift between the president and the prime minister.

Tim Ash, an economist for Nomura, said in an email, "Turkey is transforming to an Asian-style development model of a strong leader where decisions are made by the president and a small, unelected group of consultants. The danger is the weakening of the control-balance mechanism and quality of state governance." Ash added, "The result will be weaker policies. Misguided policy choices could damage the long-term growth perspective."

Economic policies will be affected by Davutoglu's departure and Erdogan's full control over the ruling AKP. Davutoglu and his deputy prime minister for economic affairs, Mehmet Simsek, had defended traditional economic policies emphasizing budgetary discipline and structural reform aimed at gaining the confidence of stock markets. On the other hand, Erdogan and his economic aides, contrary to conventional wisdom, claimed lower interest rates would mean lower inflation and contribute to economic growth. This economic concept, dubbed "Erdoganomics," focuses on growth through infrastructure, investments in construction and domestic consumption.

"Erdogan and his partisans could attribute the 14 years of success to Erdogan's political wisdom. Looking at election results, that may well be true. But the economic miracle in the AKP era has very little to do with Erdogan. Actually the trend for non-traditional policies has negatively affected the economy and market confidence," Ash wrote.

Ash attributed the economic miracle to Erdogan's former economic staff Ali Babacan, Durmus Yilmaz, Ibrahim Canakci and Mehmet Simsek. From this team of experts, only Simsek remains, and it is not yet known whether he will have a seat in the new cabinet. Erdogan's advisers have said that some names might change, but policies won't.

Because of increasing pressures on the central bank and political storms, Turkey's annual growth rate has already slowed. The 2013 Gezi protests and corruption charges against the government, the 2014 presidential election and two general elections in 2015 have already put the Turkish economy under stress. Turkey's annual growth rate, which for 50 years had averaged 4.5%, remained at an average 3% in the past four years. Economists are warning that delays in structural reforms and Erdogan's economic views could push the growth rate even lower, triggering a crisis.

Seyfettin Gursel, research director at Bahcesehir University's Center for Economic and Social Research, told Al-Monitor that Turkey had been experiencing a mediocre growth rate in recent years. "Some think that growth can be achieved by rapidly lowering interest rates. The real interest rate, which is already at 1-2%, is not high anyway. Such policies will further push down economic growth. If they make major mistakes, we could face a recession."

Kamil Yilmaz, a professor of economics at Koc University, told Al-Monitor, "Turkey has slowed down because it could not implement structural reforms. Because of the political developments of the past three years, investments have all but come to a halt. Further slowing of the economy is inevitable under these conditions."

Yilmaz described the situation as a "slow death." He said, "Politicians, to avoid a 'slow death,' may opt for populist policies, such as lowering interest rates. True, this may support growth a bit in the short term, but in the medium and long terms, you will pay the price. A shock from abroad or in Turkey could push the Turkish economy toward a crisis similar to that of 2001."

Turkey's real sector is going through tough times because of escalating terror, the slowing economy and political disquiet. So far this year, 240 companies, including major corporations, asked for protection against bankruptcy. Their difficulties in repaying loans has exacerbated bad debt issues for banks. Bad debts, which were 2.8% last year, are already at 3.3% in 2016. Some analysts say the true figure is more likely 6%.

International investment banks, because of the political commotion in the country, foresee that Turkish lira assets might be negatively affected. Commerzbank, JP Morgan and Morgan Stanley have advised a lowering of positions in Turkish assets.

Contrary to the increasing worries of economists and market players, however, Erdogan appears to be at ease. "[Naysayers] are at it again, yammering 'what is going to happen to the economy?' In 2008 they had predicted the economy would hit the bottom. I had said at that time that [the global financial crisis] will bypass us. Now they are doing the same. This country is standing tall. Stop making a hullabaloo."