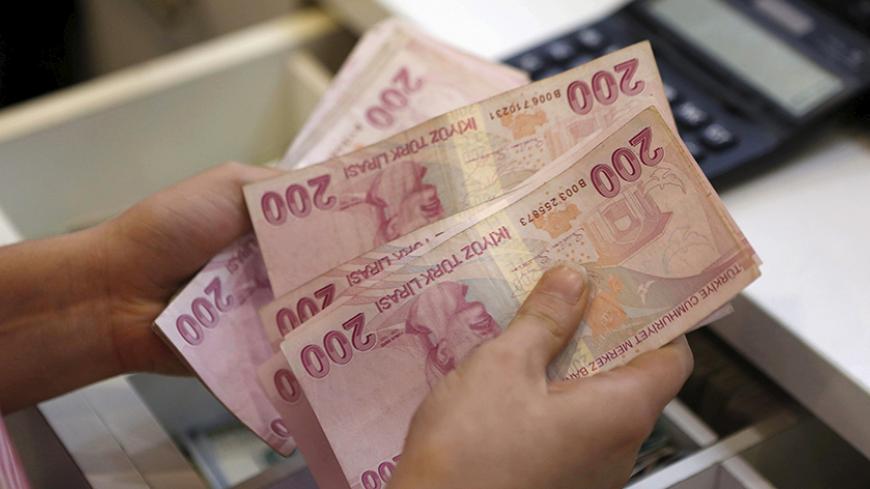 Any one of the following problems would ring alarm bells for an emerging market: a slowing economy, rising inflation, distrustful citizens exchanging local currency deposits for dollars whenever possible, a rising tide of violence scaring away foreign tourists and hurting hard currency reserves and concerned foreign investors eyeing the exit because of a bearish stock exchange and a possible hike in interest rates by the US Federal Reserve.

Not content with just one, Turkey is facing all of those headaches and more.

The country’s “peace process” with the militant Kurdistan Workers Party is all but dead. The war in Syria and the Islamic State (IS) continue to threaten civilians in Turkey.

In this context, because no party secured a majority in the parliament after the June 7 elections and no coalition has been formed, President Recep Tayyip Erdogan has called for early elections to be held on Nov. 1. In fact, Erdogan buried the peace process and launched attacks against Kurdish militants and IS to rally the voters around the flag and lure them back to his Justice and Development Party (AKP). Since June 7, perfectly aware that he would not be able to assert his authority without an AKP majority, Erdogan saw to it that Prime Minister Ahmet Davutoglu will not form a coalition with another party.

The result has not been pleasant for Turkey’s financial and economic outlook.

The Turkish currency, which had an average value of 1.90 to the dollar in 2013, is likely to decline further and surpass the three-lira threshold soon. “Never mind three, it could even be four to the dollar,” wrote Mert Yildiz, a senior economist at the prestigious economic and financial analysis firm Roubini Global Economics. According to one report, because the AKP has used dollar figures to boast of its role in the “Turkish economic miracle,” the bleeding in the lira means Turkey could lose its place in the G-20, the group representing the world’s top 20 economies.

And that’s not even the worst of it.

Whereas a depreciated currency benefits many countries, such is not the case for Turkey. Philippe Dauba-Pantanacce, a senior economist covering Turkey and the Middle East-North Africa region at the London-based Standard Chartered Bank, told Al-Monitor, “In balance, Turkey suffers from a lower [lira]. There is the collapse of consumer confidence or the high share of imports for each unit exported. Even with the lower oil prices — which should be an undisputable benefit to Turkey — the currency depreciation offsets that benefit to a certain extent. Furthermore, companies with loans in [Forex] will have to mobilize more of their cash to address the mismatch.”

Yildiz is not optimistic, either. He told Al-Monitor, “If the [snap] elections do not produce a result different from the June election, [foreign investors] would leave. However,” he warns, “it is not clear how much of that exit would be due to political uncertainties and how much of it because the Fed raises interest rates.” At any rate, Yildiz points out that other threats facing Turkey are a stagnant economy and a relative rise in inflation.

As Turkey found out in the past, “stagflation” is a bit of a death trap: Any governmental effort to boost economic activity — especially increasing public spending — fuels inflation. Yet, attempts to curb inflation usually slow down the economy.

Sebnem Kalemli-Ozcan, the Neil Moskowitz Endowed Professor of Economics at the University of Maryland, wrapped it all up for Al-Monitor as follows: “At a time when Turkey’s growth model is based on borrowing financed by foreigners, both the Fed interest hike and political uncertainties could create a terrible effect.” She warned, “Remember the Asian financial crises [of 1997] and the 2001 crisis in Turkey, when the economic situation deteriorated within days as a result of heightened political risks and existing vulnerabilities.”

Still, all may not be lost for Turkey. For the past few days, reports have come out that the Fed may not increase interest rates in September in the face of the ongoing tumult in various global stock exchanges. If the Fed does not entice global investors to park their money in the United States, the flight of foreign capital may not be as serious a problem for Turkey after all.

But if the worst does come to pass and it creates an economic crisis, it would be tragically ironic for Erdogan. It was the worst financial and economic crisis in Turkey’s history in 2001-2002 that brought Erdogan and his AKP to power. From 2002 to 2014, Erdogan and the AKP consistently won elections on account of their stewardship of Turkey’s economy. Soon, a similar economic-political crisis — for which the Turkish president has no one to blame but himself — could lead to his undoing.