Erdogan’s interference with the central bank is badly damaging foreign investor confidence in Turkey, threatening hard-currency crunches that could send the Turkish lira to new lows. 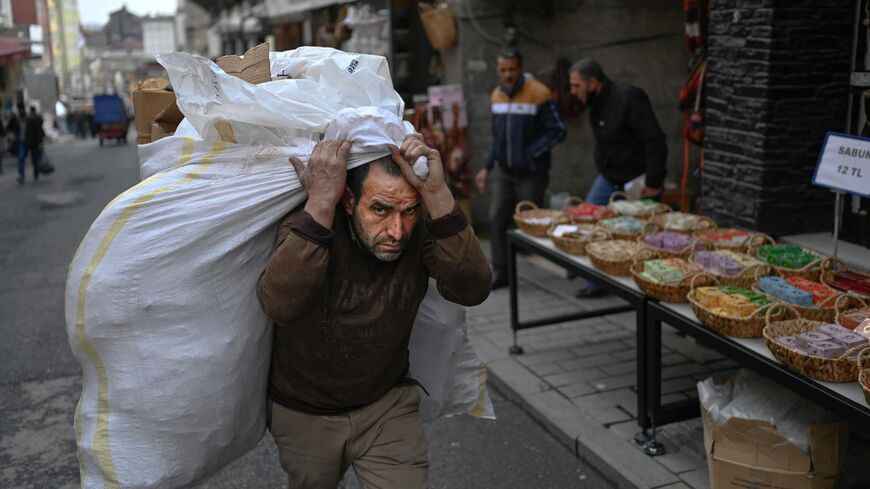 A worker carries a sack of goods at Mahmutpasa in Istanbul, on March 22, 2021. Turkish officials have been trying to calm the turmoil triggered by President Recep Tayyip Erdogan's abrupt decision to remove his reformist central bank chief on March 20, with the Turking lira losing as much as 17% against the dollar on the first day of trading after Erdogan replaced market-friendly economist Naci Agbal with former ruling party member Sahap Kavcioglu in the key post. - BULENT KILIC/AFP via Getty Images

The turbulence rattling Turkey’s financial markets since the shocking removal of the central bank governor March 20 has caused significant losses for foreign investors, threatening to further scare them away at a time when Turkey badly needs inflows of foreign funds to stabilize its nosediving currency.

In the week prior to the turmoil, foreigners had put about $500 million in fresh investments in Turkish stock shares and treasury bonds, according to central bank data, while another $1.3 billion in “hot money” came from currency swaps between foreign and Turkish banks. The foreign investor portfolios totaled $70.7 billion, including $28.9 billion invested in stock shares, $10.2 billion in government and private-sector bonds and $31.6 billion in bank deposits. The swaps, meanwhile, were estimated to have reached $24 billion. In sum, foreign “hot money” in Turkey totaled nearly $95 billion when President Recep Tayyip Erdogan fired central bank governor Naci Agbal with an abrupt overnight decree, less than five months after appointing him to the post in a bid to curb a mounting trend of dollarization in the country.

Two days before, the central bank had raised its policy rate by 200 basis points to 19% — a move that beat market expectations for a hike of 100 basis points and appeared to please foreign investors. It was the latest in a series of rate hikes under Agbal that had helped the Turkish lira recover to some extent, slow dollarization and restore some confidence in Ankara’s economic management. The sacking of Agbal was all the more shocking because he is known as an Erdogan loyalist who has previously served as a finance minister. His little-known replacement, Sahap Kavcioglu, is a proponent of low interest rates like Erdogan; the president has long argued that high interest rates cause higher inflation, contrary to conventional economic wisdom.

In the ensuing havoc in the markets, stock shares plummeted, yields on government bonds rose and the lira slumped more than 10% against the dollar, meaning significant losses for foreign investors. A clearer picture of those losses will emerge in mid-May when the central bank releases balance of payments data for March.

The more than 50% increase in Turkey’s risk premium is already a telling sign of how Agbal’s sacking — without any explanation to the public — has rattled foreign investor confidence in Ankara.

Erdogan’s aides have only added to the air of uncertainty. In a television interview March 22, the head of the presidential finance office, Goksel Asan, said, “Only the president knows why he replaced the central bank governor. He could share the reason if he deems it necessary.” Senior presidential adviser Cemil Ertem, for his part, said the frequent replacements of central bank chiefs could be the result of “brainstorming outside economics.”

Erdogan’s move and the ensuing turmoil came as a curveball for the foreigners who had placed a degree of trust in Agbal and his rate hikes to keep their investments in Turkey and even bring in some fresh ones. Thanks to them, the hot money stock in Turkey had risen to $95 billion from $79 billion at the end of 2020. Foreign investments in stock shares were worth nearly $29 billion and the lira traded at 7.2 to the dollar March 19. Since then, the lira has slumped to 8.3 against the greenback. In this period alone, foreign investors in the stock exchange suffered a loss of 15%. Those who had put more than $10 billion in Turkish bonds took an obvious blow as well, though the relevant data has yet to be released.

Not many foreign investors would be willing to swallow such curveballs, not to mention the grave repercussions for Turkey’s own public finances. With its risk premium continuing to rise, Turkey is facing higher borrowing costs down the road.

As for foreign direct investments, they were worth $201 billion in January, based on the exchange rates at the time. Obviously, those assets, too, have suffered value losses, which will become clearer after the release of relevant statistics in the coming months.

But in another surprise decree March 30, Erdogan fired central bank deputy governor Murat Cetinkaya — again without providing a reason — and replaced him with Mustafa Duman, a banker who has served at Morgan Stanley Securities. The move stoked the slide of the lira, which closed the day at more than 8.3 per dollar.

Erdogan’s back-to-back removals of central bank managers have only reinforced the climate of uncertainty, harming both foreign and domestic investors. The sentiment among foreign investors — all the more crucial as Turkey’s crisis-hit economy needs external funds to recover — seems to have worsened badly, if not irrevocably, since March 20. Foreign investors are now likely to use any opportunity to exit Turkey despite the higher exchange rates and lose appetite for fresh investments. Those with direct investments might choose to sell their assets.

By putting off foreign investors, Turkey risks hard-currency crunches that could send the lira to new lows down the road. The central bank is already in the red, having burned through its foreign reserves in controversial backdoor sales. What instruments, if any, are left in Erdogan’s toolbox is anybody’s guess.