The predicaments of Turkey’s cash-strapped central bank augur a highly challenging period for Erdogan while reducing the visibility range in Turkey’s economy to almost zero. 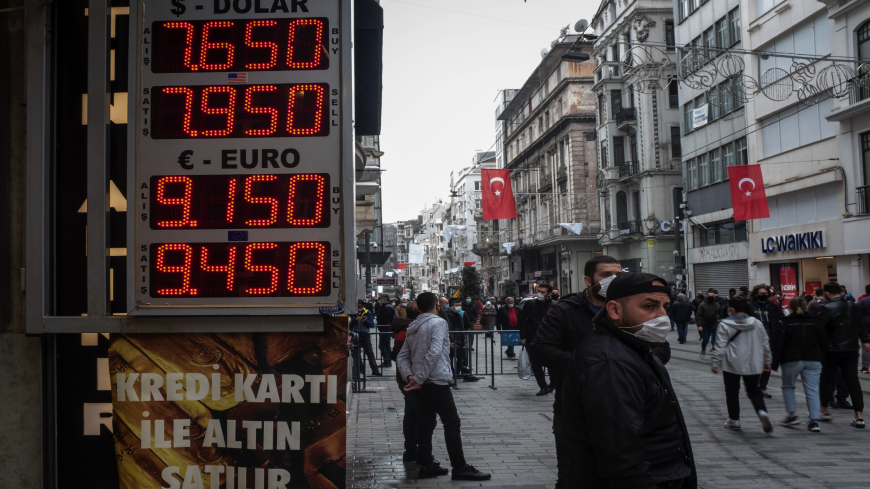 People walk past a currency exchange board on March 22, 2021, in Istanbul, Turkey. Turkey's lira plummeted as much as 15% to hit 8.39 per US dollar in the first day of trading after Turkey's President Recep Tayyip Erdogan replaced central bank governor Naci Agbal, triggering fears of another currency crisis. - Chris McGrath/Getty Images

President Recep Tayyip Erdogan’s shocking decision to appoint a new central bank governor — the fourth in 20 months — has plunged Turkey’s ailing economy into deeper turmoil, marked simultaneously by high interest rates and a tumbling currency, at a time when the central bank’s foreign reserves are already in the red. How and why Erdogan made such a grave move akin to economic suicide remains open to debate, but a risky plan for snap elections might be underlying his calculus.

It was only in early November that Erdogan had replaced the central bank governor with a trusted member of his Justice and Development Party (AKP) — former Finance Minister Naci Agbal — in a bid to rein in the slump of the Turkish lira and curb dollarization. Agbal was well on course to restore some confidence in the markets when Erdogan sacked him with an overnight decree March 20, offering no explanation for the move.

Two days before, Agbal presided over a central bank decision to raise its policy rate by 200 basis points, the latest of several hikes during his term, which have brought the rate to 19% from 10.25%. The rate hikes helped the lira regain ground against the greenback and slow dollarization, but evidently, some AKP leaders and business groups close to the party were not happy with the higher interest rates.

Defying economic orthodoxy, Erdogan has argued that high-interest rates fuel inflation and has often put pressure on the central bank to keep the rates low. His interventions, which became bolder after he assumed sweeping executive powers in 2018, have contributed to the loss of confidence in Ankara’s economic management, which has led foreign investors to flee the country. The sacking of Agbal reignited the misgivings, sparking a fresh rush for dollars that caused the lira to slump to around 8 from 7.2 against the greenback. Why did Erdogan brave those obvious consequences? Was it another “work accident” of his one-man rule? Or was he misled in some palace intrigue involving his son-in-law Berat Albayrak, who resigned as treasury minister under controversial circumstances in November?

According to allegations brought up by Ali Babacan and Ahmet Davutoglu, former AKP heavyweights who have left the party to lead opposition movements, Agbal was sacked because he was investigating how the central bank burned through $128 billion in foreign reserves during Albayrak’s term, but this is hardly a convincing explanation.

Either way, the move will have serious consequences for Turkey. Erdogan could hardly avoid paying a political price, but the real price will be paid by low- and middle-income groups, which are already grappling with severe joblessness and poverty amid the coronavirus pandemic.

Hakan Kara, a former chief economist at the central bank, warns that Turkey should brace for a stormy period. “Why the central bank governor was replaced is hard to understand. If the intention is to keep interest rates low, the replacement will produce just the opposite effect. Had [Agbal] remained on his post, the central bank could have been in a position to begin lowering rates in the middle of the year. But now, it might have to hike the rates again,” Kara told the daily Cumhuriyet March 25. The Turkish lira is unlikely to stabilize in the coming months, he said, adding, “We are entering a period of paying the price for the economic mistakes made in the past several years.”

Indeed, Erdogan’s move has raised the unprecedented specter of a simultaneous increase in interest rates on the lira and foreign exchange prices, with both pushing inflation up. The new central bank chief, Sahap Kavcioglu, has signaled the bank would keep its 19% policy rate unchanged at least until its next scheduled meeting April 15. Yet the lira has already lost the gains it had made following the latest rate hike by Agbal. The currency’s plunge after Agbal’s removal meant an 11% increase in the price of the dollar on a single day March 22, despite government efforts to intervene through foreign exchange sales by public banks.

In Turkey’s import-reliant economy, any increase in foreign exchange prices atop the already high interest rates translates to higher costs and therefore price increases in almost all goods and services. In other words, Erdogan’s replacement of the governor has unleashed a new wave of inflation that will become palpable as soon as next month. Consumer inflation, standing at 15% on a year-on-year basis, is likely to hit up to 17%, while producer inflation is expected to jump to up to 27% from the current 25%.

Rising inflation means a further erosion of confidence in the Turkish economy and a fresh uptick in Turkey’s risk premium, which bears heavily on foreign investor sentiment and external borrowing costs. On March 22 alone, Turkey’s risk premium — reflected in credit default swaps — shot up by more than 50%, rising to 474 from 309 basis points. The uptick only compounds Turkey’s decoupling from peer emerging economies amid additional headwinds and strains from the global economy.

The debate on how Erdogan made such a gross mistake will not die down soon, but one thing is obvious: He has recently stepped up moves to bolster his waning popular support and grasp a convenient moment for snap polls before his political fortunes decline further by the scheduled election time in 2023. In another staggering move at the weekend, he pulled Turkey out of a key European convention on women’s rights to please hard-line conservatives, just days after prosecutors filed a lawsuit to ban the pro-Kurdish Peoples’ Democratic Party following calls by Erdogan’s nationalist allies. The central bank controversy fits into this “big picture” as a sign of plans to lower back interest rates to stimulate economic revival.

In the second half of 2020, Ankara encouraged cheap and abundant credit to resuscitate the pandemic-stricken economy at the expense of fanning inflation and expanding the current account deficit. The climate is no longer convenient to repeat such a move, but Erdogan is seemingly bent on trying; hence, his apparent need for a central bank governor even more loyalist and docile than Agbal.

The adverse dynamics triggered by Agbal’s reckless removal have further diminished the leeway for rate cuts. Should the central bank insist on rate cuts in the coming months, it would have to also respond to the rush for dollars that would ensue. How the bank could pull it off is anyone’s guess, as it is left without a dollar of its own, relying on borrowed money as reserves.

In the past two years, the bank funneled $128 billion to the market via public banks in a bid to prop up the embattled lira. As a result, it has no real reserves left but a negative reserve of $45 billion. This predicament augurs a highly challenging period for Erdogan while reducing the visibility range in Turkey’s economy to almost zero.