Is the worst behind in Turkey’s economic turmoil?

Ankara’s policy reversal on interest rates has led to some positive developments in the economy, but many observers warn that it is still too early to rejoice. 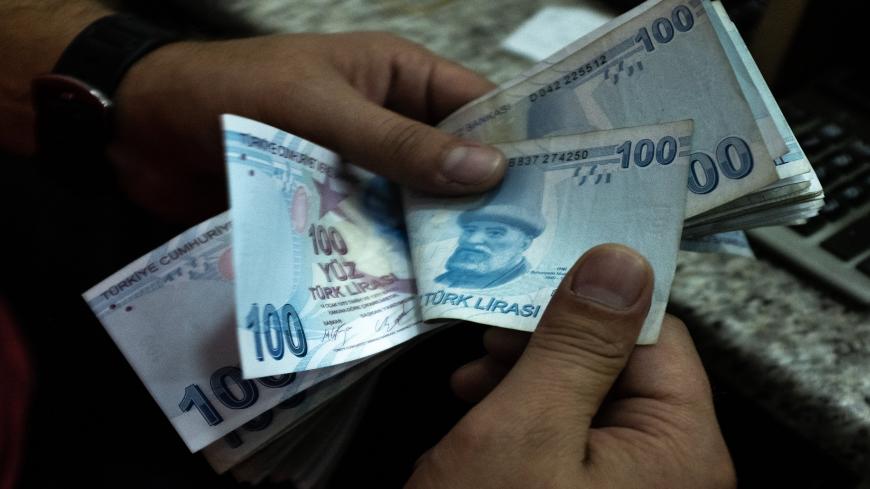 The embattled Turkish lira has relatively recovered and some foreign short-term investors have returned to Turkey since early November, when Ankara replaced two key economy officials — the central bank governor and the treasury minister — in what it presented as a reform drive to overcome the country’s two-year economic turmoil, exacerbated by the coronavirus pandemic. But is the Turkish economy out of the woods?

After the brewing storm in early November, the economy does appear on a fresh course and many have breathed a sigh of relief — at least for now — that the country has come round a dangerous bend. The key component of Ankara’s “economic reform drive” is the reversal of its policy to keep interest rates low despite the dramatic slump of the currency and rising inflation. In a bid to make the lira more appealing to savers and curb dollarization, the central bank under new Gov. Naci Agbal announced two hikes in its policy rate in November and December that totaled nearly 7 percentage points and brought the rate to 17%.

As recently as April, the bank had cut the rate to as low as 8.25% at the tacit behest of President Recep Tayyip Erdogan, who has long advocated an unconventional theory that high interest rates increase inflation. In a speech in August, Erdogan hailed the decreased rates, saying, “God willing, they will decrease further.” This, however, did not materialize. The relentless slump of the lira, coupled with a rising inflation and a growing current account deficit, forced Ankara to change tracks amid apprehension that the import-reliant Turkish economy could hardly afford a further increase in hard currency prices.

Agbal has put up a determined posture on the bank’s new approach, and new Treasury and Finance Minister Lutfi Elvan, who replaced Erdogan’s son-in-law Berat Albayrak, has pledged continued efforts at stability, leading market actors to believe that Ankara has at least put the brakes on the downturn.

The policy reversal has eased risk perceptions about the Turkish economy, as evidenced by the country’s risk premium that has dropped nearly 14% over a month, standing at 320 basis points Dec. 30. The risk premium — reflected in credit default swaps or the cost of insuring exposure to Turkey’s sovereign debt — had hit a five-year high of 643 basis points in May. Despite the improvement, it remains 18% higher than a year ago, meaning that Turkey’s external borrowing costs have yet to significantly decrease.

Nevertheless, a flow of foreign money to the Istanbul stock exchange has accompanied the downtick in the risk premium — a sign that Ankara’s credibility has somewhat improved.

Foreign portfolio investments in Turkey had decreased by $2.2 billion in 2018 and $3.3 billion in 2019. The outflows in 2020 amounted to $9.6 billion, despite the new investments in the past two months. From Nov. 6 to the year-end, foreign investors put more than $4 billion in securities in Turkey, mostly in riskless repurchase agreements, attracted by the higher yields of the lira after the hiking of interest rates. The new investments were instrumental in buoying the markets and boosting the lira. The price of the dollar was below 7.5 liras at the year-end, falling from about 8.5 liras in early November.

Yet hard currency deposits in the country have not decreased. Local money owners appear reluctant to return to the lira in a sign that Ankara’s credibility problem is far from over. Hard currency deposits amounted to a record $258.3 billion at the end of 2020, increasing by $37.4 billion over a year. Hard currencies accounted for 56% of all deposits, with the rate even higher — 60.4% — in terms of individual savings deposits.

The confidence gap that keeps locals sticking to hard currency has to do with the precarious state of the central bank’s foreign reserves after the bank squandered billions of dollars on failed operations to prop up the lira. The bank’s gross reserves stood at $91.8 billion Dec. 18, covering only 69% of short-term external debt. In terms of external debt maturating in less than a year, which amounts to $181 billion, the coverage rate was even lower, dropping to 50.7% from 62.8% in the same period in 2019. The central bank has yet to publicly answer for burning through some $130 billion in backdoor forex sales to curb the slump of the lira, a policy that bore little fruit but depleted the reserves of the bank.

Despite the persisting confidence gap at home, the inflow of foreign “hot money” and the retreat of hard currency prices are positive developments. Most analysts, however, warn it is still too early to rejoice.

The increase in interest rates has irked companies that relied on cheap credit to stay afloat. Following the rate hikes, credit taps have been tightened, leading to a notable contraction in the loan volume. A loan bonanza only several months ago had sparked booms in the sales of homes, cars and durable goods, giving companies some respite from the crisis. Businesspeople are now grumbling about a sharp decrease in demand and frequently convey their complaints to Erdogan. Yet Ankara needs to stay resolute on monetary tightening in order to rein in inflation, which is expected to hit 15% in the first quarter of 2021.

The heightened rates are bound to spell trouble also for those saddled with debt, and the banks — already under strain — appear unlikely to show more flexibility.

In sum, Erdogan’s government will be under two-way pressure in the coming months: one for continued stabilization and the other for monetary relaxation. When and how he ends the policy of tightening will be of crucial importance for economic actors.