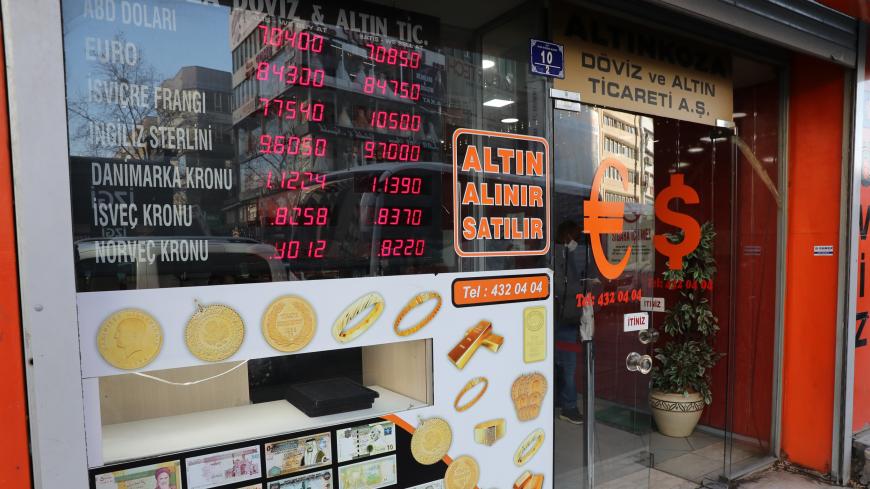 Foreign currency rates are displayed on a board at a currency exchange office, in Ankara, Turkey, on Feb. 5, 2021. - ADEM ALTAN/AFP via Getty Images

Turkey’s foreign debt repayments and the financing of its current account deficit will require at least $200 billion this year, threatening to push up borrowing costs and disrupt the recent gains of the battered Turkish lira unless Ankara rebuilds its credibility among financiers and investors.

The amount of Turkish external debt due to mature over 12 months stood at some $189 billion at the end of 2020, representing 43.4% of the country’s $435 billion external debt stock, according to central bank data released Feb. 18. The foreign debt stock, meanwhile, has come to account for nearly 60% of Turkey’s gross domestic product under the impact of economic downturn since 2018, fueled by the severe depreciation of the Turkish lira. The rollover of foreign debt has already strained Turkey in recent years, forcing it to borrow on higher interest rates.

Turkey needs foreign monies also to finance its current account deficit, which is likely to hit $15 billion this year.

The country had posted a current account surplus of about $7 billion in 2019 as economic growth slowed to 1% and imports decreased. The economic blows of the COVID-19 pandemic, however, led to a deficit of nearly $37 billion last year, according to central bank figures. Though the growth rate for 2020 has yet to be officially released, estimates put it at 2% — a rate that makes the current account gap even more staggering. A key factor expanding the deficit was the huge increase in gold imports, which rose to $25 billion last year from $11 billion in 2019 as gold became a prime safe haven for savings amid the turmoil of the pandemic and Turkey’s own currency crisis.

The gold craze is unlikely to continue this year and even if the economy grows no more than 3%, the current account deficit is still expected to reach $15 billion, based on the prospect that Turkey’s tourism revenues will remain low due to the pandemic and imports will become more burdensome due to the global upswing in commodity prices.

Even if the gap reaches only $10 billion, assuming that economic growth and imports remain modest, this would still require $200 billion to repay foreign debts and finance the current account deficit.

Managing such a burden without facing hefty borrowing costs or disrupting the recovery of the lira appears a tall order, unless Ankara undertakes reforms to boost its credibility. Any major distress in securing the required foreign funds might send the lira tumbling anew. The currency has regained more than 20% against the dollar since November, when Ankara replaced its central bank governor and treasury and finance minister, marking the reversal of a much-criticized policy to keep interest rates on the lira low despite rising inflation and the slump of the currency.

The private sector owns nearly $126 billion or two-thirds of the $189 foreign debt due to mature over 12 months, the central bank data show. About $68 billion of those liabilities, mostly short-term debt stemming from imports, are owned by companies and the rest by banks. Meanwhile, public banks such as Ziraat, Halk and Vakif own 85% of the $42 billion foreign debt that the public sector has to repay this year. About $21 billion in 12-month liabilities belong to the central bank, stemming almost entirely from currency swap deals with Qatar and China.

True, Turkey has previously managed to roll over debts in the region of $200 billion, but the amount keeps increasing every year, as does the burden of interest. At the end of 2019, the external debt due to mature over 12 months was $20 billion less than the current sum. In 2020 alone, interest payments on foreign debt totaled more than $6 billion.

Gaining access to $200 billion under tougher conditions requires Turkey’s risk premium to decrease further, well below the 280 basis points to which it has recently dropped. A lower risk premium would facilitate the quest for foreign funds and decrease their cost. While interest rates have fallen close to or even below zero in some countries, the Turkish treasury had to acquiesce to an interest rate of about 5% to be able to borrow in January, when the country’s risk premium stood at about 300 basis points.

Moreover, the reshuffle in Ankara’s economy team, the central bank’s ensuing rate hikes and the government’s pledges of reform have yet to produce a vibrant inflow of foreign investments.

Above all, foreigners remain reluctant on direct investment in Turkey, which the country needs the most. The most exciting investment plan last year — a big plant by German carmaker Volkswagen — went down the drain amid political tensions between Ankara and the European Union, coupled with the COVID-19 pandemic. Real estate purchases accounted for 95% of the $4.6 billion foreign direct investment in Turkey last year, meaning that foreign interest in the country’s industrial and services sectors was next to zero.

In terms of foreign investment in Turkish stocks, the country saw a net outflow of $5.5 billion in 2020, even though investments picked up in the last quarter.

The inflow of hard currency secured through the swaps with Qatar fell short even of financing the current account deficit and, eventually, the central bank burned through $32 billion in reserves to cover the gap.

A much lower risk premium — below 200 basis points at least — is the key to an easier and cheaper access to foreign funds. Ankara can achieve this only through economic and political steps to boost its credibility in the eyes of domestic and foreign actors. Investors need confidence that Ankara has a stable economic plan that goes beyond monetary tightening through rate hikes. They expect also transparency in key economic areas, including clarity on the amount of bad loans in the banking sector and the financial burden brought on the budget by controversial turnover guarantees Ankara has offered to companies involved in major infrastructure projects. Last but not least, they are watching closely whether Ankara follows through with pledges of judicial reform to restore trust in the rule of law.