The jury is still out on Turkey’s downward revision of short-term external debt, but similar revisions that improved GDP figures in the past have cast doubt on the credibility of Ankara’s economic data. 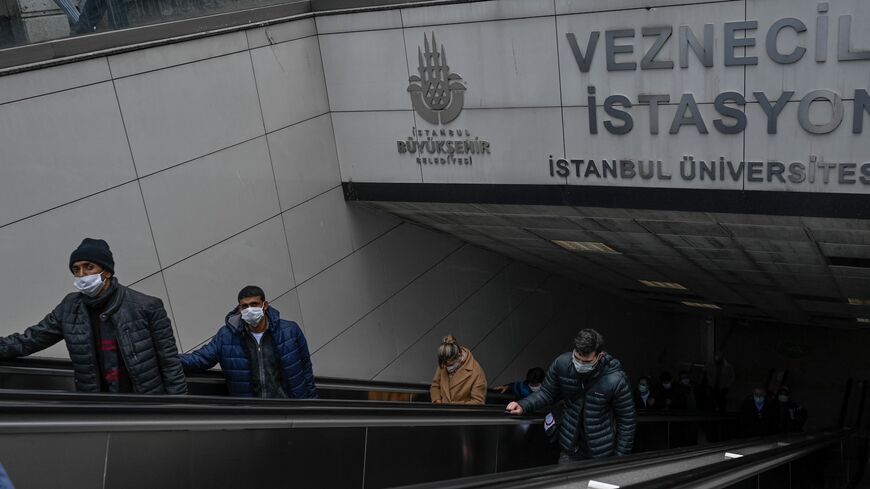 People come out from a metro station at Laleli in Istanbul, on March 22, 2021, as Turkish officials tried to calm turmoil triggered by President Recep Tayyip Erdogan's abrupt decision to fire his reformist central bank chief. - BULENT KILIC/AFP via Getty Images

Turkey’s central bank has revised some of its data compilation methods and definitions, as a result of which the country’s short-term external debt — foreign liabilities with a maturity of up to 12 months — dropped to $164 billion from $189 billion over a month.

The bank justified the revision on the grounds of inconsistencies identified in trade credits data, saying that the revised statistics, released Aug. 19, were the outcome of efforts to improve data quality and compliance with international standards. The new methodology, which relies on direct reporting at company level rather than macro data of foreign trade and bank reporting, “affected export receivables upwards and import payables downwards,” according to a research note by central bank experts.

The bank introduced also a distinction according to maturity between the short- and long-term deposits of nonresidents in Turkey, which were all assumed to be short-term thus far. As a result, long-term deposits — those with maturity of above one year — were excluded from the short-term external debt table. In another revision, foreign funds obtained through repossession are now recorded as loan obligations for banks.

Some critics see the revisions as a “cosmetic makeover” to improve Turkey’s debt outlook amid the precarious state of the central bank’s international reserves. Yet, they argue, the revisions are unlikely to better the short-term debt to reserves ratio as much as Ankara might be hoping, and could instead fuel questions over the credibility of central bank data, just as similar data revisions by the Turkish Statistical Institute did in the past, and shake further the already waning investor confidence in Ankara’s economic management. The appointment of Sahap Kavcioglu, a ruling party loyalist, as central bank governor in March marked the third time since mid-2019 that President Recep Tayyip Erdogan had abruptly replaced the bank’s chief, stoking concerns over the independence of monetary policy.

The central bank had signaled the revisions in an inflation report earlier this year, saying, “The fact that Turkey's trade credits due to imports are relatively high compared to other countries … indicates a possible bias.” In a bid to improve data compilation through direct reporting by companies, “Those companies that represent at least 80% of total imports and exports on a quarterly basis are requested to report their export receivables and import payables on a domestic-international basis, including their foreign currency composition,” it added.

Export receivables, meanwhile, were revised upward to $38 billion from $23 billion, international investment position data show. Accordingly, their ratio to the $200 billion in exports rose to 19% from 12%.

As a result of revised assets and liabilities, the gap in Turkey’s net international investment position in May decreased to $294.2 billion from $327.8 billion.

The trimming of short-term external debt is of significance for foreign investors in terms of the ratio of short-term external debt to reserves, which is seen as an indicator of how vulnerable a country is to currency crises. Ostensibly, Ankara hopes that the improved ratio will ease concern over the central bank’s reserves, which have been badly depleted in the past two years by “back-door” market interventions to prop up the nosediving Turkish lira.

The reserves stood at $98 billion at the end of June. With the short-term external debt revised down to $164 billion, its ratio to reserves improved by 7 percentage points to 59%. Still, even this ratio remains well below that of many countries among Turkey’s emerging-economy peers.

The downward revision of the short-term external debt, which owes also to the new distinction between the short- and long-term deposits of nonresidents, will reflect also on Turkey’s external debt stock, which stood at $448 billion in the first quarter, amounting to 61.5% of gross domestic product (GDP). A corresponding $25 billion decrease in the external debt stock is likely to be seen in upcoming debt data for the second quarter.

The revisions will affect the balance of payments as well. The decrease in import liabilities appears to have had a positive impact on the current account deficit.

To what extent will the revised debt liabilities improve Turkey’s foreign outlook? The answer lies with foreign monetary authorities and investors who monitor the indicators. Time will show how convinced they are with Turkey’s justifications for the revisions. That said, similar changes that revised the GDP upward in previous years did lead to a certain credibility erosion, and the external debt is a rubric that requires even more precise scales.