Turkey’s central bank appears increasingly fragile, with more than 60% of its reserves secured through swap deals. 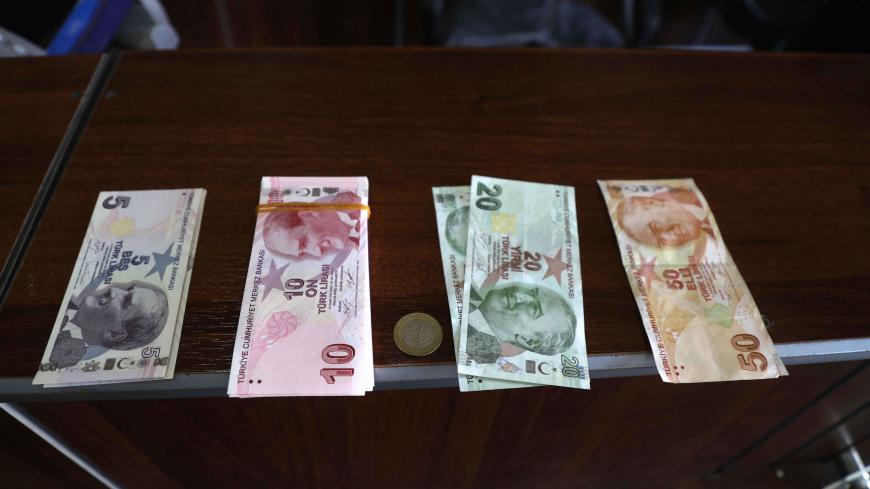 Turkish lira banknotes are pictured at a bank in the town of Sarmada in Syria's northwestern Idlib province, on June 14, 2020. - AAREF WATAD/AFP via Getty Images

The US dollar stockpiles of countries have taken on a new importance amid the global economic turmoil caused by the COVID-19 pandemic. The turmoil has forced countries to review how they manage the gaps between their assets and liabilities and enact fresh measures. As a result, the adequacy of foreign currency reserves in meeting short-term liabilities has become a closely watched indicator.

A report released by the International Monetary Fund (IMF) last week, offers data comparing central bank reserves to the short-term liabilities of countries. The document — an update to the IMF global financial stability report — reveals that the reserves of Turkey’s central bank are below the adequacy limit. The ratio of foreign currency reserves to short-term liabilities, supposed to be at least 100%, stands at about 80% for Turkey, which is shown in the most fragile group, along with South Africa, Chile and Egypt. In terms of the ratio of external financing requirements, including the current account balance and debts maturing within a year, to gross domestic product, Turkey is again among the most fragile countries, along with Poland and Malaysia.

The IMF’s reserve adequacy norm is a matter of debate on both the reserves and liabilities legs. The argument standing out in Turkey is that the country’s central bank has grown more fragile in meeting its liabilities, with more than 60% of its reserves relying on currency swap deals, that is, a “peg leg.”

According to central bank data, Turkey has $164.6 billion in debts that will mature within a year. The country’s current account deficit reached $12 billion in the first four months of the year and is likely to hit $30 billion by the year-end.

The IMF uses a more complicated formula to calculate the reserve adequacy of central banks. It factors in 30% of short-term external liabilities in the nearest 12 months and 15% of other liabilities as well as 5% of export and services revenues and 5% of broad money supply. According to @VeFinans, a Twitter handle that publishes reliable data on the Turkish economy, the central bank’s reserve adequacy was 72.6% in April as per IMF criteria, with gross reserves amounting to only $86.3 billion and liabilities standing at $119 billion under the said formula.

Turkey’s central bank provides no data on reserve adequacy, but releases monthly figures on gross reserves in line with IMF standards. In May, the bank’s official reserve assets totaled $90.9 billion, a 5.3% increase from $86.3 billion in April. In sub-items, foreign currency reserves increased 5.4% to $52.8 billion and gold reserves rose 5.4% to $36.7 billion.

The bank notes that “outstanding FX and gold liabilities arising from [the central bank’s] financial derivative activities with resident and non-resident banks recorded $55.3 billion, of which $20.1 billion is due in one month.” This is an important detail as it pertains to sums obtained through currency swaps with foreign central banks and local banking actors. Accordingly, it reveals that more than 60% of reserves have been secured through swaps or “financial derivative activities.”

Turkey has clinched swap deals with China and Qatar and the sum obtained through those deals has been announced as $16 billion. Turkey sought a similar deal with the US Federal Reserve, but to no avail, even though the Fed offered swap lines to other emerging economies such as Brazil and Mexico. Some observers tend to attribute the spurning of Turkey to diplomatic frictions with Washington, but harsh economic realities stand out as the essential reason. Here is why:

In mid-March, risk perception at the markets deteriorated and credit lines came to the brink of collapse under the economic impact of the COVID-19 pandemic. The US dollar liquidity in global markets became extremely scarce, leading the Fed to offer swap facilities to the central banks of the eurozone, England, Japan, Switzerland and Canada, all key actors in global money flows. The facility was soon extended to Australia, New Zealand, Singapore, Denmark, Norway, Sweden, South Korea, Mexico and Brazil.

The reasons for Turkey’s exclusion are not hard to discern. The share of Turkish financial assets in the basket of developing market economies has seen a sharp decline, shrinking to about 0.5%. Ankara has severely squeezed the London lira market to prevent what it sees as speculation by foreign actors to weaken the country’s currency. Among holders of government bonds, the foreigners’ share has fallen to 6% from about 30%. And US-Turkish trade is worth only about $20 billion, accounting for less than 0.4% of US trade volume.

Meanwhile, the central bank is estimated to have used about $70 billion in reserves to prop up the embattled lira in the past 15 months, employing indirect, non-transparent methods via public banks. While the results of those operations have been lackluster, the international media has often sounded alarm over the central bank’s plunging net reserves. In sum, the central bank’s failure to get the Fed’s green light is hardly a surprise.

The way out from such dire straits goes through improving the country’s credibility. And confidence in Turkey depends on political credibility and a sustainable governance system. The executive presidency system, introduced two years ago, has failed to meet those expectations.

Banking and Finance
China in the Mideast
Turkish economy