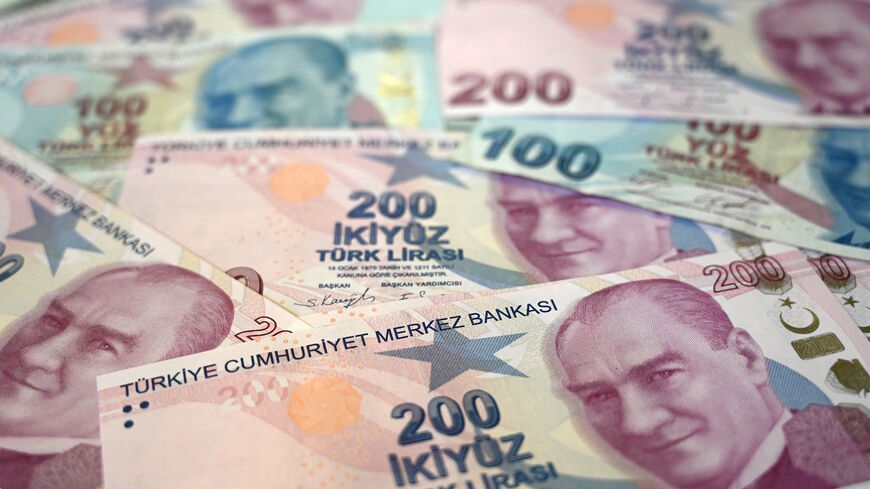 Creating and managing perceptions seems to have become a high priority for the government of President Recep Tayyip Erdogan, as it struggles to ease Turkey’s economic turmoil and reverse its sagging popular support ahead of elections next year. A case in point is the central bank and its depleted foreign reserves. Currency swap deals with friendly nations have become a tool to push up the bank’s gross reserve figures and gloss over the drain.

After the most recent currency swap deal, signed with the United Arab Emirates (UAE) last month, Al-Monitor has learned that preparations are underway at the central bank for similar deals with the central banks of the Turkic nations of Azerbaijan, Turkmenistan and Uzbekistan, as well as Libya, based on cooperation protocols signed in the past two years.

Though the swap deals entail the exchange of local currencies and provide no access to hard currencies such as dollars and euros, they serve to inflate the central bank’s gross foreign reserves in what is, in a sense, window dressing.

The central bank has increasingly turned to currency swaps because it has depleted its foreign reserves by selling hard currency via public banks in a bid to prop up the embattled Turkish lira and rein in foreign exchange rates, which are crucial for Turkey’s import-reliant economy. The bank burned through $128 billion in such back-door sales, apparently at below-market prices, in 2019 and 2020.

Central bank data show that foreign monies obtained through swaps amounted to about $21 billion at the end of 2021. The largest swap deal has been sealed with Qatar, whose rulers enjoy close relations with Erdogan. The initial limit of the 2018 deal was tripled to the equivalent of $15 billion in 2020.

The first swap deal was signed with China in 2012, when Erdogan was prime minister, for the exchange of up to 3 billion Turkish liras, equivalent to about $1.6 billion at the time, and 10 billion Chinese yuan. In June 2021, the facility was renewed and raised to the equivalent of about $6 billion at the time.

A similar three-year deal followed in August with South Korea for the exchange of up to 17.5 billion liras and 2.3 trillion Korean won, the equivalent of about $2 billion.

On Jan. 19, the Turkish and Emirati central banks sealed a three-year swap of up to 64 billion liras and 18 billion dirhams, the equivalent of some $5 billion, after Ankara and Abu Dhabi agreed to normalize ties after years of regional rivalry.

The sizes of the deals with Qatar, China, South Korea and the UAE total the equivalent of up to $27 billion, and sums amounting to $21 billion have apparently entered the Turkish central bank’s accounts.

As for the likely new deals, the swap with Azerbaijan appears imminent and is expected to be equivalent to about $1.5 billion, according to the sources. Similar deals are likely to follow with Turkmenistan, Uzbekistan and Libya this year. Saudi Arabia, the next country in Ankara’s regional fence-mending quest, and some Balkan countries might also join the list.

In announcing previous swap deals, the central bank has said their core objectives are “to facilitate bilateral trade in respective local currencies and to support the financial stability of the two countries.” The aim of trading in local currencies appears to have largely stayed on paper. For instance, Turkey’s imports from China totaled about $30 billion last year, while its exports were worth only about $4 billion. The currency swap had almost no impact on the $34 billion trade volume, with the Chinese rarely trading in local currencies. The same goes for trade with Qatar, which was worth a mere $1.5 billion last year and did not involve the use of local currencies.

Nevertheless, the central bank has used the dollar equivalents of the swapped monies as a sort of “filling” in its gross foreign reserves. And Erdogan, under opposition fire over the bank’s depleted reserves, would cite the gross figure in response to critics and never mention the net reserves. The bank’s gross foreign reserves stood at $110 billion as of Jan. 14, but stripped of swaps, its net reserves were $57 billion in the red.

Though the swap deals do not involve convertible foreign exchange, they are often touted as inflows of hard currency to foster favorable perceptions in a bid to curb hard currency prices.

And while the swap deals have been instrumental in boosting gross foreign reserves, they have pushed up also the country’s external debt stock, especially short-term liabilities. The central bank’s foreign debt stood at $25 billion in November, pushed up by $21 billion worth of swap monies. For comparison, the bank had a foreign debt of only $1.7 billion in 2017.

For foreign financial authorities and investors, this is an indicator of Turkey’s economic fragility. As US investment banking giant Goldman Sachs noted after the deal with the UAE, “We do not see the swap agreement as a meaningfully positive development, as it only boosts the headline gross reserve series but does not add to the [central bank’s] hard currency reserves.”