How realistic are Ankara’s hopes of trading in Turkish liras?

While the Turkish lira continues to tumble, Turkey’s currency swaps with China and other countries have failed to live up to their stated objective of boosting trade in local currencies, official data show. 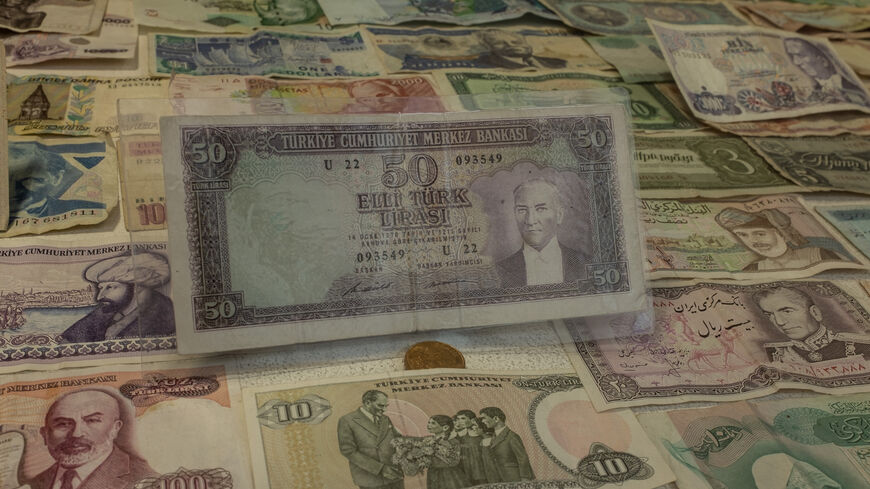 Obsolete Turkish lira banknotes are seen in the window of an exchange office on May 05, 2022, in Istanbul, Turkey. - Burak Kara/Getty Images

Ankara’s long-standing ambition to expand the use of the Turkish lira in foreign trade was back on the agenda this week as President Recep Tayyip Erdogan held talks with his Russian and Iranian counterparts in Tehran, rekindling debates on whether trading in the local currency is a viable prospect or just wishful thinking.

Since Russia and Iran supply most of Turkey’s energy needs, resulting in big imbalances in mutual trade, Ankara’s desire to trade in local currencies is understandable. The same goes for trade with China, which is a major supplier of investment goods and industrial inputs for Turkish manufacturers.

Erdogan’s government is faced with a growing foreign currency crunch and the battered lira continues to fall. Having lost 44% of its value in 2021, the lira has slumped 25% this year and inflation has spiked to near 79% amid economic woes fueled by controversial rate cuts last year. The dramatic depreciation of the currency has further reduced the appeal of trading in liras, and the runaway inflation makes it even harder, if not impossible, to find partners willing to deal in local currencies.

This, however, has not stopped Erdogan from promoting trade in local currencies, especially with Russia, Iran, China and Gulf countries.

Hit by Western sanctions, Iran and Russia have sought to boost trade in local currencies as well. On June 19, the day the presidents of Turkey, Iran and Russia met in Tehran, the Iranian Currency Exchange launched trading in the rial-ruble pair, with about 2 million rubles sold for more than 10 million rials in initial transactions, according to Iranian media. The country’s Central Bank governor, Ali Salehabadi, voiced hope the trading volume would increase down the road, hailing the move as an important step in furthering economic ties with Russia and countering global currencies such as the dollar and the euro, which, he said, have become “political tools of domination.”

In Turkey’s case, little progress has been achieved, even though Erdogan’s government has continued to bring up the issue over the years, frequently testing the waters with Russia, Iran and China and even proposing an Islamic megabank and local-currency trade between Muslim countries.

According to official data, Turkish buyers paid in liras for only 3.8% of the country’s nearly $146 billion imports in the first five months of the year, while dollar and euro payments accounted for 71% and 24% respectively. Similarly, only 2.8% of Turkey’s $102.5 billion exports in the same period were invoiced in liras, while 49.5% were in dollars and nearly 46% in euros. Moreover, a significant part of the lira payments represent transactions between companies based in Turkey and their branches in EU countries.

Promoting trade in local currencies has been also the stated aim of a series of currency swap deals that the Turkish Central Bank has concluded with Chinese, Korean and Gulf counterparts. A boilerplate sentence in official announcements of the deals reads, “The core objectives of the agreement are to facilitate bilateral trade in respective local currencies and to support financial stability of the two countries.”

The official foreign trade statistics, however, show that the swap deals have had little impact on expanding commercial exchanges in local currencies.

Foreign monies obtained through swaps amounted to about $21 billion at the end of 2021, with the bulk coming from a deal with Qatar. The initial limit of the 2018 deal was equivalent to $5 billion and was tripled to $15 billion in 2020. Yet bilateral trade in local currencies has remained all but symbolic. In the first five months of the year, Turkish import payments in Qatari riyals amounted to a mere $134 and Turkish exporters received Qatari riyals for goods worth only some $4,000, according to official records.

The swap facility with China, first signed in 2012, was later renewed and raised to 46 billion Turkish liras and 35 billion Chinese yuan in June 2021, which was the equivalent of about $6 billion at the time. The yuan was used to pay for only $212,000 worth of Turkish imports and about $10,300 worth of Turkish exports in the first five months of the year.

As for the deal with South Korea, agreed upon in August 2021 for the exchange of local currencies equivalent to about $2 billion, it has yet to make a mark on bilateral trade. According to official data, neither Turkish importers nor exporters used the South Korean won in the first five months of the year.

The most recent swap deal was signed in January with the United Arab Emirates for the equivalent of some $5 billion. The use of the Emirati dirham remains trivial in bilateral trade, amounting to $21,000 in payments made by Turkish importers and $13,000 in payments received by Turkish exporters in the first five months of the year.

In sum, the stated objective of facilitating trade in local currencies has remained pretty much on paper. For Turkey, the swaps have effectively served to gloss over the central bank’s depleted foreign reserves by inflating the gross figure.

As for the Turkish lira, it clearly stands no chance to make the cut in international trade as long as it continues to plummet amid an inflation galloping toward a three-digit figure, no matter how persistent Ankara might be in pushing the issue.