Turkey’s currency has lost 73% of its value against the dollar since Erdogan assumed sweeping executive powers in 2018 and remains prone to fresh shocks amid growing economic fragilities. 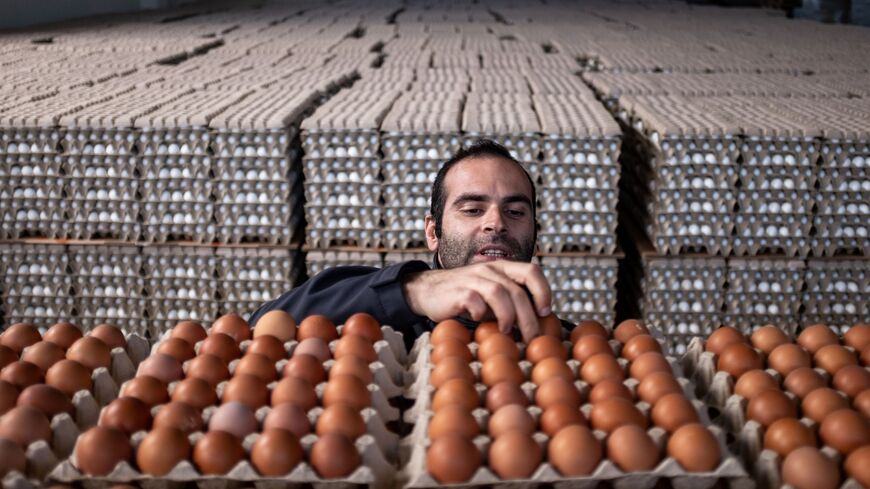 An employee checks eggs at Aytekin chicken farm on on May 06, 2022 in Bandirma, Turkey. Inflation soared to nearly 70% over one year in April in Turkey. Egg prices in Turkey increased by 178% in a year. - Burak Kara/Getty Images

Economic advance was a major pledge that President Recep Tayyip Erdogan made in promoting Turkey’s transition to a super-presidency system, but his record after four years as executive president leaves little to celebrate.

Erdogan was re-elected president on June 24, 2018 for a second term, armed with new, sweeping executive powers following a constitutional overhaul the previous year that weakened the parliament’s clout and concentrated power in the hands of the president. Four years on, his governance is widely criticized as a “one-man rule” that has eroded checks and balances, tightened control over the judiciary and imposed a firm grip on the Central Bank and other economic bodies.

In memorable remarks on the eve of the elections, Erdogan — a self-declared “enemy of interest rates” — had pledged to use the new presidential powers to streamline decision-making and remove snags holding back the Turkish economy.

On the fourth anniversary of the elections, Turkey’s economic outlook is a far cry from what he had pledged, marred by currency shocks and runaway inflation with severe impoverishing effects on the masses. Erdogan’s poll numbers have been sagging, raising the prospect of his fall from power after two decades at the helm, perhaps in early elections before he completes his five-year term in June 2023.

Erdogan had long argued for an executive presidency system, convinced that more power was all he needed to quickly fix the country’s economic problems. Even before he officially assumed his new powers, he had made it clear he would flout the independence of the Central Bank and stick to his view that high interest rates cause high inflation, which contradicts conventional economic theory. In an interview with Bloomberg in May 2018, he defended presidential influence on Central Bank policies, saying that “it’s those who rule the state who are accountable to the citizens.” Global money managers were dumbfounded by his intentions, foreshadowing the significant decline in foreign investments that Turkey has suffered since then.

The first currency shock came in August 2018 as then-US President Donald Trump targeted the Turkish economy in a row over the detention of an American pastor in Turkey. The Turkish lira lost 28% of its value in two months, tumbling to 6.4 from 4.6 versus the dollar. The crisis ended only after the Central Bank hiked its policy rate by a whopping 625 basis points to 24% in mid-September. Consumer inflation topped 20% that year.

A second currency shock hit in November 2020 amid the economic fallout of the COVID-19 pandemic and a deepening scandal over the Central Bank burning through $128 billion in foreign reserves. The bank had used the money in back-door operations to funnel foreign exchange to the market, desperate to prop up the lira. The turmoil saw the resignation of Treasury and Finance Minister Berat Albayrak, who is also Erdogan’s son-in-law, and the sacking of the Central Bank governor. Their respective replacements, Lutfi Elvan and Naci Agbal, attempted monetary tightening to ease the currency shock. Rate hikes under Agbal brought the Central Bank’s policy rate to 19% by March 2021, with annual inflation standing at about 16% that month.

In the first three years of the executive presidency system, Turkey’s economy grew only 3% in 2018, less than 1% in 2019 and 1.8% in the pandemic-hit 2020. Bent on stimulating growth to boost his popular support ahead of the next elections, Erdogan was convinced that borrowing costs should go down despite inflationary pressures, a plan that cost Agbal his post in March 2021 and Elvan later in the year.

Heeding Erdogan, the Central Bank’s new leadership began cutting the 19% policy rate in September, when inflation was running around 20%. Four cuts in as many months brought the rate to 14% in December, with inflation reaching 36% in the meantime. The controversial policy triggered a third currency shock. The lira, which traded at 8.3 against the dollar in early September, nosedived past 18 on Dec. 20.

To rein in the havoc, Ankara announced the so-called FX-protected deposit scheme, under which the Treasury compensates lira depositors for any losses caused by the depreciation of the currency. The scheme has managed to slow the dollarization wave, but not without adding to Treasury’s burden and spawning fresh economic risks.

For Turkey’s import-reliant economy, the sharp uptick in hard-currency prices has meant soaring costs of imports, chief among them energy, and thus a skyrocketing consumer inflation. The rise in commodity prices since Russia’s invasion of Ukraine in February has only added to Turkey’s woes. Having hit 36% last year, consumer inflation shot up to an annual of 73.5% in May, a level unseen since 1998. Food and transport inflations reached 91% and 105% respectively.

Meanwhile, a combination of pent-up demand after the end of pandemic restrictions and a stockpiling trend in the face of inflation has helped sustain economic growth. Turkey’s gross domestic product grew 11% last year and 7.3% in the first quarter of 2022. Nevertheless, official statistics show that the share of what the labor force got from that economic expansion actually shrank.

The purchasing power of wage earners has been melting fast against inflation, and the jobless now number about 8 million, according to the broad definition of unemployment. The impoverishing impact of inflation has swept beyond low-income groups, hitting the middle classes and all pensioners.

The government has no strategy to fight inflation. Instead, Erdogan aims to sustain growth in an inflationary environment until the elections. He is expected to hike the minimum wage in July, along with public sector salaries and pensions, but the grievances of the electorate are unlikely to abate as long as prices continue to increase.

Moreover, the Treasury’s liabilities have worsened under Erdogan’s executive presidency. Its domestic debt stock has reached 1.5 billion lira ($86.4 billion), while its interest liabilities have outstripped the principal to top 2 trillion lira – a 250% increase from 2018. Turkey’s external debt stock, meanwhile, stood at $441 billion at the end of 2021, up from $426 billion in 2018.

In another gloomy indicator, Turkey’s risk premium — or the cost to ensure exposure to the country’s sovereign debt, reflected in credit default swaps — has severely decoupled from those of peer emerging-market economies. It soared above 800 basis points in June, as opposed to a level as low as 281 basis points in 2019. This means that the interest rate Turkey would pay to borrow from foreign creditors today is at least 8 percentage points higher than three years ago.

Furthermore, the country’s current account deficit reached $21 billion in the first four months of 2022, equaling the entire year in 2021. In addition, Turkey is saddled with $182 billion external debt repayments in the next 12 months. These are both factors threatening a fresh currency shock atop the lira’s loss of 73% of its value versus the dollar in the past four years.

And in a sign of how voters view the economic shifts in the past four years, the consumer confidence index dropped to 63.4 in June, down from 92 in July 2018.