Turkey’s 'covert' interest payments on course to exceed regular ones

The cost of state safeguards in a deposit scheme meant to curb dollarization in Turkey has ballooned to alarming levels as the Turkish lira continues to tumble. 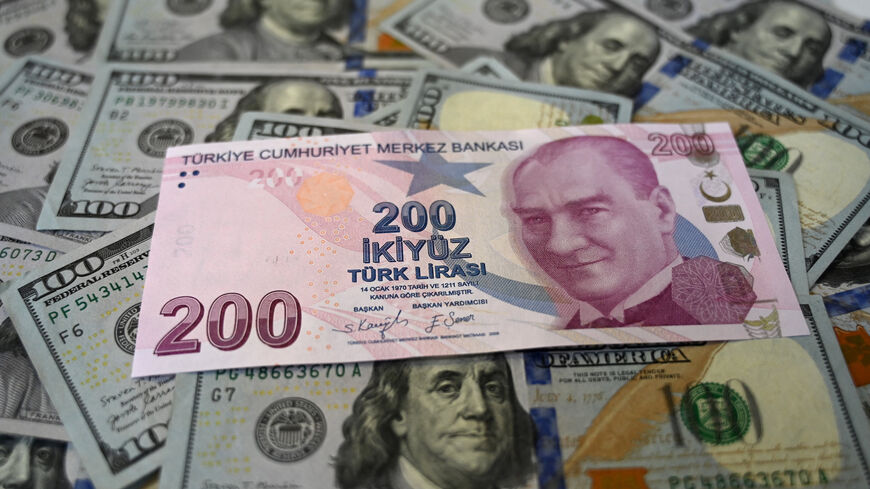 The compensations — or “covert” interest — that Ankara pays to depositors under a scheme to curb dollarization in Turkey are on course to balloon beyond its interest payments, while the battered Turkish lira has already fallen back close to its record low in December, when the scheme was introduced.

The so-called FX-protected deposits were launched as part of emergency measures that President Recep Tayyip Erdogan announced shortly after the lira sank to an all-time low of 18.4 against the dollar on Dec. 20, driven down by unorthodox rate cuts by the central bank at Erdogan’s behest. Under the scheme, the treasury and the central bank make up for any losses that lira depositors incur from the currency’s depreciation. Despite its initial rebound to the region of 11 versus the dollar after the announcement of the scheme, the lira has since plummeted anew, trading at about 18.1 against the greenback on Aug. 22.

As a result, the cost of the scheme to the state has been swelling.

Retail and corporate depositors held more than 1.2 trillion liras ($66.2 billion) in FX-protected accounts as of early August. The deposits have notably grown in the past several months as the government expanded the scope of the scheme and facilitated the terms for corporates.

The banks have been responsible for paying depositors an annual interest of 17%, or some 4% for the minimum term of three months. The extra yields — or the gains the depositors would have made in terms of liras had they kept their money in dollars — have been met from the central government budget and the central bank.

Thus, the essence of the scheme boils down to interest payments by the state, even though the payments do not appear as such in official financial records. The sums paid by the treasury appear in the “current transfers” section of the budget, while those paid by the central bank are factored in as an expense in its profit and loss statement, precluding the bank from registering any profits to transfer to the budget.

The banking watchdog releases weekly data on the total sum deposited in the scheme, but no figures are available on how liabilities are distributed between the treasury and the central bank. According to estimates, their shares are 40% and 60%, respectively.

Monthly budget statistics allow for the monitoring of the treasury’s payments. Accordingly, it paid more than 60.5 billion liras ($3.4 billion) to depositors as part of the scheme in the five months from March, when the first three-month deposits matured, to July. The central bank, for its part, is estimated to have paid some 80 billion liras ($4.4 billion) in the same period.

Some pundits estimate the scheme could drain up to 361 billion liras ($19.9 billion) from state coffers this year should the lira tumble to 20 versus the dollar. That would exceed by far the 329 billion liras ($18.2 billion) allocated to interest payments in the budget this year.

Such fears about the lira are not unfounded in light of irrational economic moves by Ankara such as the central bank’s fresh rate cut last week, which shocked the markets.

It was a series of such rate cuts that fueled Turkey’s currency turmoil in December. The central bank had begun to cut its policy rate in September at the behest of Erdogan, who insists on the unconventional view that high interest rates cause high inflation and has prioritized growth to boost his prospects of reelection next year. Turkey’s consumer inflation stood at about 20% in September, but instead of hiking rates to tame price increases, as many peer countries were doing at the time, the central bank moved to lower its 19% policy rate. Four cuts in as many months brought the rate to 14% in December.

Prices have skyrocketed since then, with annual inflation running at nearly 80%. This, however, did not stop the central bank from lowering its policy rate to 13% on Aug. 18, with the stated aim of preserving the growth momentum in the economy.

As a result of this controversial policy, hard currencies have become a major safe haven for savings in Turkey. Foreign currency deposits constitute 56% of all bank deposits in the country today. And with their yields tied to hard currency prices, the FX-protected deposits themselves amount to a form of dollarization that would bring the rate to 71%.

The scheme has been criticized also as a wealth transfer to high-income retail depositors and corporates, who have the means to invest in and benefit from the scheme, while millions of low-income people underwrite the bill as taxpayers.

Other budget expenditures illustrate how alarming the cost of the scheme has become. In fact, the treasury’s payments under the scheme top the list of current transfers, which include agricultural and welfare supports among others. While depositors were paid some 60.5 billion liras ($3.4 billion) from taxpayers’ money in the first five months of the scheme, agricultural producers received only 40 billion liras ($2.2 billion) in support at a time when severe hardships in the sector have sent food inflation to 95%.

The scheme remains under fire from the opposition, which is hoping to win the upcoming elections, due in June 2023 at the latest. In a striking outburst earlier this month, the leader of the main opposition Republican People’s Party, Kemal Kilicdaroglu, called the scheme “an atomic bomb planted in the country’s economy” and vowed to undo it once in power. Addressing “the handful of people” benefitting from the scheme, he said, “When we come to power, you will receive only the interest [from the banks]. There will be no forex guarantees whatsoever.”