Turkey’s Treasury faces a hefty bill from a controversial plan to defend the Turkish lira, even as the scheme has failed to make a major impact in reducing dollarization. 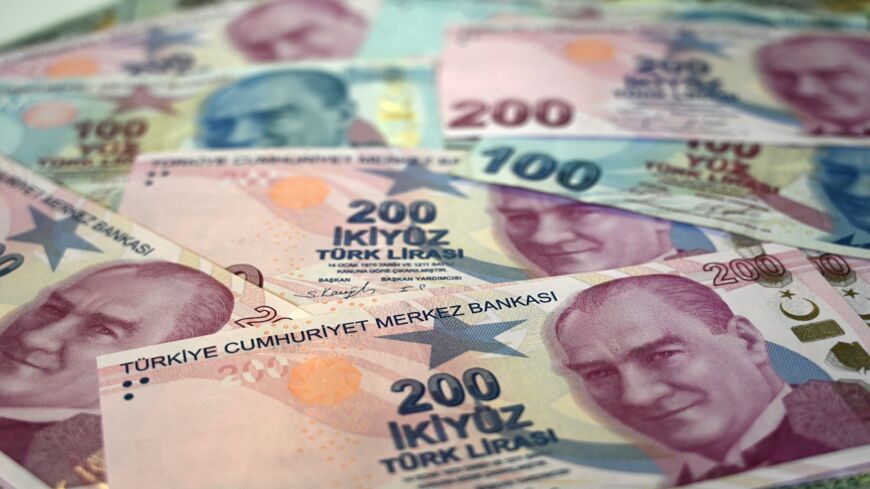 Public outrage is growing in Turkey over the cost of a government scheme to curb dollarization and prop up the Turkish lira, launched hastily in December to stop the dizzying slump of the currency, now that payments have begun to depositors who joined the scheme for three months.

Unlike the initial assurances of officials, the scheme has put a heavy burden on the Treasury while making only a small impact in curbing dollarization, with more than 60% of retail accounts sticking to hard currency. Moreover, some critics question even the legality of Treasury payments under the scheme, which will be covered largely with taxpayers’ money.

Lying at the core of the scheme is a government guarantee to make up for any losses that holders of lira deposits incur should the lira depreciate versus foreign exchange. The so-called FX-protected deposits were launched on Dec. 24 as part of emergency measures that President Recep Tayyip Erdogan announced on Dec. 20, hours after the lira hit an all-time low.

The currency had plunged into a tailspin in September when the central bank began cutting rates despite an uptick in inflation, heeding pressure from Erdogan, who holds the unconventional view that high interest rates cause high inflation. The bank’s four rate cuts in as many months totaled 500 basis points and brought its policy rate to 14%, pushing real yields deep into negative territory. The controversial policy fueled a rush for hard currency as people scrambled to protect the value of their money both against soaring inflation and the slump of the lira. The currency tumbled past 18 versus the dollar on Dec. 20, losing about 50% of its value since September. In the meantime, foreign exchange deposits came to account for 71% of all deposits in the country.

Following the announcement of the scheme, the lira rebounded, helped also by public banks selling hard currency to the market. The lira traded at 11.4 to the dollar on Dec. 24 as the scheme took off.

The scheme was initially intended for retail depositors, aiming to encourage those keeping their money in hard currency to return to the lira and prevent those holding liras from fleeing to hard currency. But interest in the scheme fell short of Ankara’s expectations, leading the government to expand the scope to companies with an added tax incentive and then to Turkish nationals living abroad and eventually to foreign citizens and entities.

Official statements on the performance of the scheme have been scarce, but they indicate that 54% of FX-protected deposits are held by companies.

As for retail depositors, the scheme has benefited mostly well-off rent-seekers, given that a small minority holds the bulk of retail deposits in Turkey. Some 64% of bank accounts of more than 1 million liras belong to depositors who represent 0.37% of all depositors.

FX-protected lira deposits account for only 9.5% of all deposits at present. And despite the safeguards the government offered for the lira, hard-currency deposits worth $157 billion still account for 64.6% of all retail deposits as of March 21, showing that the scheme has been of little help in reducing dollarization.

And what about the cost of the scheme now that the first three-month deposits matured on March 24?

The central bank’s dollar buying rate was 11.4 liras when the scheme was launched; now it is 14.85 liras. In other words, the greenback yielded profits of 30% for those who kept their savings in dollars. For those who opted for FX-protected deposits, this means the following: The bank is responsible for paying them the 17% annual interest rate, which amounts to a 4.25% yield for three months, while making up for the remaining 25.75% is up to the Treasury. This is a staggering burden on public finances and thus taxpayers, which belies the assurances of government officials at the outset.

Nebati, for instance, had argued in late December that the Treasury was facing no risk. “Ultimately, this will result in a current account surplus. Investors are given a three-month period in which stability, confidence and relaxation will be secured. The Treasury is facing no additional burden even in the worst-case scenario,” he said.

Three months on, the scheme has failed short of securing the desired reversal in favor of the lira. The country’s current account deficit, meanwhile, expanded to $20.2 billion on a 12-month basis at the end of January. Annual inflation hit 54.4% in February, and the lira has begun to tumble anew amid global economic headwinds following Russia’s invasion of Ukraine.

The ultimate cost of the scheme for the Treasury depends on how the lira will perform down the road, but the bill is estimated to reach 75 billion to 100 billion liras by the end of the year. For Turkey’s taxpayers, this amounts to financing a covered interest rate paid to a relatively small number of well-off depositors at a time when the popular masses are grappling with skyrocketing prices and unemployment.

Respected economist Fatih Ozatay estimates that the rate paid by the Treasury in the scheme could reach 48% on an annual basis. “Had [the central bank] implemented an interest rate policy that took stock of inflation, which was just below 20% at the time, instead of lowering rates by 5 percentage points, the Treasury would not have had to bear such a high interest rate today. And not only that. Exchange rates would not have increased that much either,” he wrote.

According to Murat Bati, an academic specializing in tax law, the legal basis of the Treasury’s payments under the scheme is also questionable. He recalls Article 73 of Turkey’s Constitution, which says, “Everyone is under obligation to pay taxes according to their financial resources in order to meet public expenditure.” He opines that interest payments cannot be considered public expenditure and thus the Treasury cannot use tax revenues to make payments under the scheme.