The ratio of the Turkish government’s interest liabilities to its principal domestic debt has hit a staggering 117%, up from 60% last year. 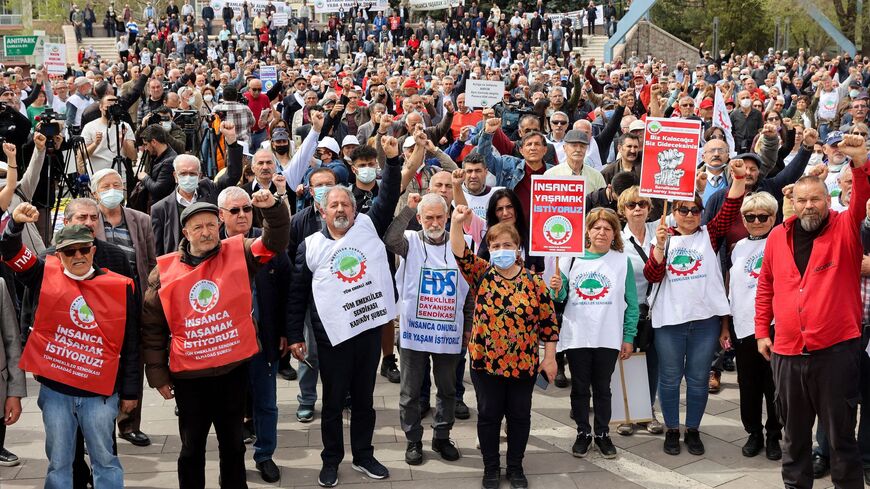 Pensioners take part during a demonstration against the rising prices and low pensions in Ankara, April 16, 2022. - ADEM ALTAN/AFP via Getty Images

As Al-Monitor reported earlier this month, the inflation surge in Turkey has led to daunting income transfers to the detriment of the wage-earning masses, with banks emerging as a chief beneficiary of Ankara’s controversial economic policies. Banks made net period profits of 39 billion liras in the first two months of the year, a 323% increase from 9.2 billion liras in the same period in 2021. Those whopping profits owe mainly to a government bond pegged to the consumer price index (CPI), one of the treasury’s three lira-denominated bond types, along with other domestic borrowing instruments based on hard currency and gold.

The CPI-indexed bonds, which account for 23% of the treasury’s borrowing means, have placed the heaviest burden on public finances due to the sharp spike in consumer inflation this year. The corresponding increase in the yields of CPI-indexed bonds has been the main driver of the threefold increase in bank profits over a year.

Lying at the core of those financial woes is President Recep Tayyip Erdogan’s fixation on the idea that high interest rates cause high inflation — the opposite of what mainstream economic theory holds. Under pressure from Erdogan, the Central Bank began lowering its policy rate in September despite rising inflation. The cuts totaled 500 basis points in four months, bringing the bank’s policy rate to 14% and pushing real yields deep into negative territory. The controversial policy sparked a rush for hard currency as Turks scrambled to protect the value of their savings. The tumbling lira further fueled inflation and the banks’ profits from CPI-indexed bonds rose.

Things have since gone amok amid a dizzying spike in inflation, which topped 61% in March. The domestic debt stock swelled to nearly 1.5 trillion liras in April, increasing 158% since 2018, when Turkey transitioned to an executive presidency system and Erdogan assumed sweeping powers. Interest liabilities, meanwhile, outstripped the principal, reaching some 1.7 trillion liras in April, an increase of 282% since 2018, stoked heavily by the CPI-indexed bonds. The ratio of interest liabilities to the principal has now hit a staggering 117%.

With domestic debt now totaling some 3.2 trillion liras, a sum equivalent to nearly 45% of the country’s gross domestic product last year, Erdogan’s government is set to foist a whopping debt burden on the next government should it lose the upcoming elections expected to take place in June 2023 at the latest.

Another financial black hole stems from a deposit scheme that Ankara hastily introduced in December to stop the crash of the lira and curb the dollarization wave in the country. Under the scheme, the treasury and the Central Bank make up for any losses that holders of lira deposits incur due to the lira’s slump versus hard currencies.

According to Deputy Treasury and Finance Minister Cengiz Yavilioglu, the treasury and the Central Bank paid 13.2 billion liras ($894 million) and 1.6 billion liras ($108 million), respectively, in compensation to deposits that matured by April 8. Additionally, he said, the government forfeited tax revenues of 10.2 billion liras ($690.5 million) as part of incentives offered to corporate depositors under the scheme.

Separately, Ankara has lowered or zeroed down withholding rates on lira deposits, an incentive that is estimated to cost the budget up to 30 billion liras ($2 billion) annually.

Pundits estimate that the compensation paid to depositors under the lira protection scheme and forfeited revenues from taxes and withholding rates could total up to 100 billion liras ($6.8 billion) by the end of the year. For comparison, the government pays only a third of that sum — 33 billion liras in 2021 — as support to agricultural producers in a country where food inflation has topped 70%.

In sum, Ankara’s hefty interest liabilities, its payment of “covered” interest rates to lira depositors and forfeited revenues are increasingly narrowing the treasury’s wiggle room and raising the prospect of a financial wreck to be inherited by the next government.