The cost of Ankara’s domestic borrowing in hard currency and gold is estimated to have hit nearly 32% per annum amid the slump of the Turkish lira, more than doubling the cost of borrowing in liras. 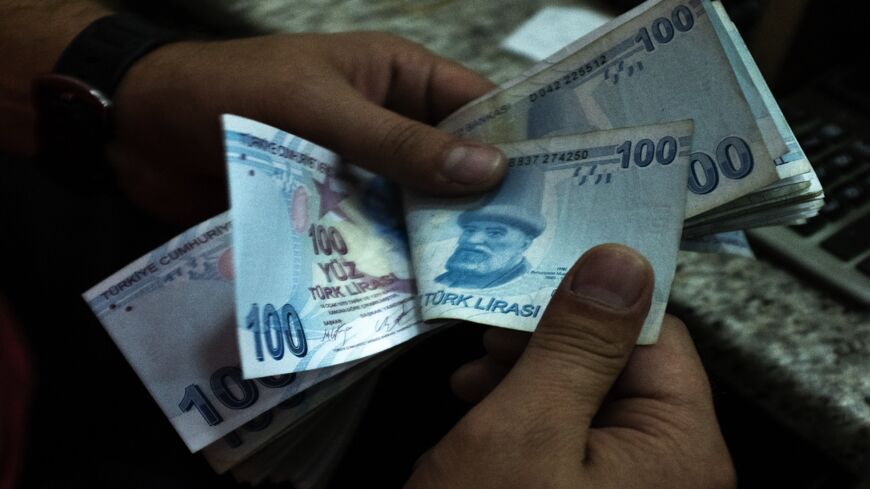 A borrowing scheme that Ankara hoped would help rein in the slump of the Turkish lira and keep interest rates in check has produced a hefty bill for Turkish taxpayers. The scheme, involving domestic borrowing in gold and hard currency, has not only failed to deliver the expected results but also more than doubled the cost the Turkish Treasury would have paid had it borrowed in liras, experts estimate.

While external borrowing has been commonplace, the Treasury would shy away from domestic borrowing in hard currency, a means that had cost it dearly in the years that led to Turkey’s big financial crisis in 2001. The International Monetary Fund, which sponsored Ankara’s recovery program at the time, had also warned against using that means. Under the Justice and Development Party, which came to power in November 2002, the Treasury gradually reduced domestic borrowing in foreign exchange and zeroed it down by 2012.

Yet the risky method made a comeback after President Recep Tayyip Erdogan appointed Berat Albayrak, his son-in-law, as treasury and finance minister in July 2018 as Turkey transitioned to an executive presidency system that concentrated power in Erdogan’s hands. Albayrak, whose economic decisions were often slammed as “the courage of ignorance” by opposition critics, held the post until his controversial resignation via Instagram in November 2020. Using various securities such as gold bonds and gold and euro-denominated lease certificates, the Treasury borrowed lavishly at home under Albayrak, accumulating a domestic debt denominated in foreign exchange equivalent to nearly a third of its foreign debt stock.

The main objective of the Treasury was to lure gold held by citizens into the economy. To shield their savings against inflation and the depreciation of the lira, Turks have traditionally put their money in hard currencies and gold. Such assets are often hoarded at home and are widely referred to as under-the-mattress savings. As the Treasury said on its website at the time, “The under-the-mattress gold [in Turkey] is estimated to amount to at least 2,200 tons ($100 billion). The issuance of Gold Bonds/Gold Denominated Lease Certificates aims to attract those assets to the economy and strengthen the country’s reserves.”

Ironically, Albayrak turned to domestic borrowing in foreign exchange while Ankara was calling on citizens to trust the Turkish lira and stay away from hard currency after the lira nosedived in the second half of 2018 amid turmoil stoked by waning investor confidence in how Erdogan would manage the economy after assuming sweeping executive powers. It was a risky move on the part of Albayrak, but he apparently hoped that it would attract much interest and help increase the foreign exchange liquidity and thus curb the slump of the lira. By avoiding borrowing in liras, Ankara hoped also to prevent the increase of interest rates.

To cajole citizens into bringing out their gold, the Treasury’s announcement stressed they could earn “extra returns of 1.2% over six months (2.4% over a year) from gold that is kept under the mattress or in bank vaults without any yields,” adding the returns would be exempt from withholding tax. “Citizens will be able to sell their Gold Bonds/Gold Denominated Lease Certificates to their intermediary banks and obtain the cash they need whenever they wish, similarly to how under-the-mattress gold is being sold on the market and converted to cash,” it said.

Yet such borrowing seemed to have little impact in alleviating the currency turmoil. Even back-door hard-currency sales by the central bank, which led it to burn through $128 billion in foreign reserves, failed to stop the slump of the lira. The price of the dollar stood at 8.59 liras in November when Albayrak resigned, up from 4.72 liras in July 2018 when he had assumed office.

As a result, the tumble of the lira and the increase in gold prices have both aggravated the cost of domestic borrowing denominated in foreign exchange and gold.

Prominent Turkish economist Ugur Gurses estimates the $19.2 billion bonds that have matured as part of domestic borrowing in foreign exchange and gold under Albayrak have produced an average cost of 31.8% per annum, including the yields paid on the bonds and the differences stemming from the increased gold and foreign exchange prices, whereas the average cost of lira bonds with yields at market rates would have been 14%. Whether this cost grows further will depend on exchange rates, gold prices and Turkey’s inflation rate, which appears headed to reach an annual 20% soon.

That said, each increase in foreign exchange prices bears also on the repayment cost of Turkey’s external debt, which totaled $450 billion at the end of 2020. The public sector owns 38%, or $173 billion, of that debt stock, including $102 billion owned by the Treasury and the remaining by public banks and enterprises. The public sector’s external debt grew from $136 billion at the end of 2017, in which the Treasury’s share stood at $93 billion.