The Turkish government’s latest loan restriction may help the embattled lira recover to some extent, but not without the risk of damaging side effects. 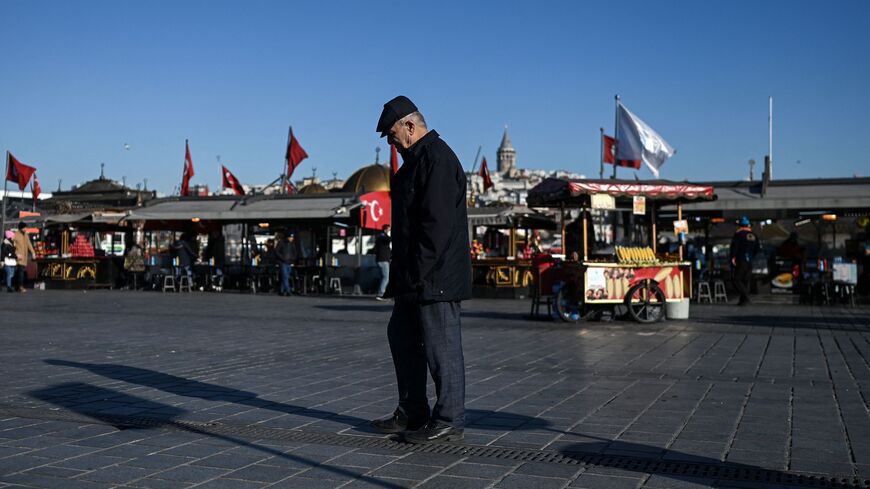 A man walks near the fish and bread vendors on Dec. 21, 2021, in the Eminonu district of Istanbul, Turkey. - OZAN KOSE/AFP via Getty Images

Desperate against galloping inflation but bent on keeping interest rates low, Turkey’s government has turned to interventionist measures akin to capital controls to bolster the embattled lira. The latest is designed to force companies to reduce hard-currency holdings.

In a surprise announcement late on June 24 after local markets had closed, the Banking Regulation and Supervision Agency banned banks from issuing lira loans to companies holding foreign exchange worth more than 15 million liras ($895,000) if that amount exceeds 10% of their total assets or annual sale revenues.

In an economy where few enterprises operate without using lira loans as operational capital or for export-oriented production, the move is effectively forcing companies to sell hard-currency holdings and lira-ize, which amounts to restricting capital movements and contravenes the free foreign-exchange regime.

The measure is the latest in a series of controversial efforts by the Turkish authorities to prop up the lira and thus rein in inflation without raising interest rates — an unorthodox approach imposed by President Recep Tayyip Erdogan, who argues that high borrowing rates fuel inflation in defiance of conventional economic theory. Turkey’s annual consumer inflation shot up to 73.5% in May from 19.6% in September, when the Central Bank announced the first of four consecutive rate cuts under pressure from Erdogan. The rate cuts pushed real yields deep into negative territory, sending the lira into a tailspin.

Despite the inflation surge, domestic demand has kept production wheels turning and Turkey’s manufacturers, who rely heavily on imported inputs, have continued to buy vigorously from abroad. The country’s imports were worth $146 billion in the first five months of the year, an average bill of nearly $30 billion per month. Companies also need to hold hard currency to repay foreign loans. The real sector owns $61 billion of Turkey’s $182 billion external debt that matures over the next 12 months. And because of a succession of currency shocks in the past several years, companies have come to convert their assets to hard currencies as a precaution.

The real sector’s foreign currency holdings are estimated at some $80 billion. How companies will react to the new limitation remains to be seen. According to observers, some are expected to toe the line and reduce their holdings to avoid vexing Ankara, while others are likely to look for roundabout ways to clear the 10% threshold such as shifting funds to sister companies and partners or engaging in derivative transactions with foreign firms.

Either way, forcing companies to limit their foreign-currency assets boils down to a capital control and it might backfire. Most notably, it threatens to further scare away foreign investors at a time when the country badly needs hard-currency inflows amid a growing current account deficit and depleted foreign reserves. Foreign direct investments in Turkey have significantly declined in recent years and its stock market and sovereign bonds are struggling to attract foreign investors.

Moreover, the move stokes apprehension that government measures amounting to capital controls might extend to retail depositors, who hold about $151 billion in hard-currency accounts in Turkish banks. Observers warn that such fears might trigger a hard-currency flight from banks to under the mattress.

Still, the loan restriction could help the lira regain some value. Following the announcement by the banking watchdog, the lira surged to about 16.5 versus the dollar in the evening of June 24 from about 17.4 earlier in the day.

Like all its recent economic decisions, the government’s attempt to deter corporates from holding foreign-currency cash has to do with Erdogan’s electoral calculations. The next presidential and parliamentary elections are due in June 2023, but many believe Erdogan is looking for a window of opportunity to bring the vote forward before the country’s economic turmoil deepens further. His poll numbers have sagged amid growing popular grievances over skyrocketing prices and melting purchasing powers. Since Erdogan became Turkey’s first executive president in 2018, three major currency shocks have hit the Turkish economy and inflation has spiraled out of control, threatening to reach at least 75% in June. The consumer confidence index — an indicator of voter sentiment — declined to 63.4 in June, a drop of nearly 20 points over a year. The confidence indices of the real sector and the services sector also dropped in June.

Erdogan has insisted on promoting economic growth in an inflationary environment at the expense of myriad side effects rather than fighting inflation, which would require some bitter prescriptions. Instead of raising interest rates to directly tackle inflation, Ankara has opted for measures to curb the fall of the lira, a key factor fueling prices.

After the lira sank to historic lows in December, Ankara introduced a deposit scheme to make lira savings more attractive and rein in a dollarization wave under which the treasury compensates lira depositors for any losses incurred from the depreciation of the currency. The scheme, which has attracted 992 billion liras ($59.9 billion) thus far, has resulted in yields of nearly 49% in the first six months, costing the treasury 21 billion liras ($1.3 billion) in what is essentially interest payments.

To support the lira and curb foreign exchange prices, the government has also begun to enact coercive measures amounting to capital controls in the real sector. The loan ban on corporates with significant foreign-currency cash follows a string of restrictions imposed on exporters. In January, Ankara mandated exporters to sell 25% of their foreign-currency revenues to the Central Bank, which is scrambling to replenish its depleted foreign reserves. The rate was raised to 40% in April.

In a further step earlier this month, the Central Bank relaxed the terms of its so-called rediscount credits to exporters, but required recipients of such loans to sell a further 30% of their foreign-exchange proceeds to commercial banks and commit to not buying hard currency in the market for a month. Leaders of exporters’ associations complain that companies that rely heavily on imported inputs and are thus dependent on dealing in foreign exchange will struggle to qualify for the loans. The measure, they warn, could slow exports and result in exporters losing markets in the long run.