Turks keep holding on to dollars as mistrust in Erdogan lingers

Ankara’s currency-defense scheme has stopped the lira’s nosedive for now, but there is no tangible sign that a return to the lira has begun to reverse the alarming dollarization in the country. 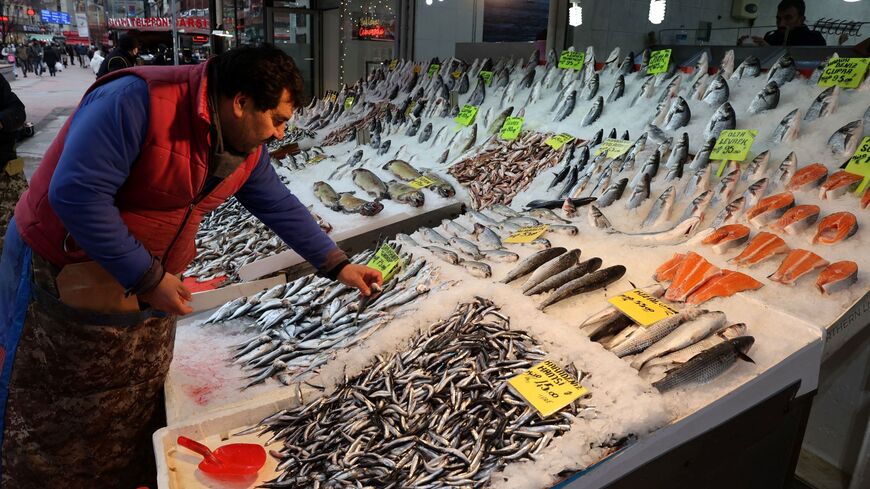 A vendor sorts his goods at a fish market in Ankara on Dec. 20, 2021 as Turkey's troubled lira nosedived after Turkish President cited Muslim teachings to justify not raising interest rates. The currency continues to be volatile, and economists believe the policy could see consumer price increases reach 30 percent or higher in the coming months. - ADEM ALTAN/AFP via Getty Images

The jury is still out on Ankara’s scheme to encourage a return to the Turkish lira as hard-currency depositors are sticking to their assets despite a state-backed market intervention that rallied the lira last week.

The scheme, meant to reverse an alarming dollarization trend, was announced by President Recep Tayyip Erdogan on Dec. 20, shortly after the lira tumbled past 18 versus the greenback. It was an all-time low, to which the embattled currency sank from the region of 11 vs. the dollar in just a month amid growing apprehension over Erdogan’s push for interest rate cuts despite soaring inflation. Officials may claim that the scheme has sparked a return to the lira, but financial data indicate the opposite.

The scheme aims to encourage foreign-currency depositors to return to the lira and prevent the flight of the remaining lira holders, pledging that any losses they might incur from the fall of the lira would be reimbursed by the treasury or the central bank. But despite all-out promotion by state institutions, public banks and the pro-government media, hard-currency depositors have shown little interest so far, mainly because of lingering mistrust in Ankara. The confidence gap has been compounded by revelations about how the lira’s abrupt rally occurred — through back-door interventions by the central bank, which sold billions of dollars via public banks despite its already depleted foreign reserves.

The scheme requires retail depositors to tie their money up for at least three months. That has little appeal to the majority of deposit holders in Turkey on one-month terms. Moreover, depositors who choose to leave the scheme earlier risk a loss on their principal amounts if the lira slides in the meantime, in addition to losing the return from the bank’s interest rate. The lira, which had surged about 50 percent to the region of 10 versus the dollar last week, was already falling this week, touching 11.95 to the greenback on Tuesday.

The rebound on Dec. 20 may have come as a relief, but for many ordinary people it meant the loss of precious savings in the blink of an eye. The currency’s nosedive since September — stoked by Erdogan’s toughening rhetoric against rate hikes and coupled with soaring inflation threatening to reach 50 percent down the road — had led many to seek refuge in the dollar. People who had paid up to 18 liras per dollar watched their savings melt as the worth of the greenback dropped to about 12 liras in a matter of hours after Erdogan announced the new scheme in the evening.

The fast rebound raised questions as to who was selling huge amounts of dollars at that late hour. Retail investors had only the banks’ online services at their disposal, leading pundits to suggest — correctly, as it  turned out — that public banks were at play. Panicked ordinary citizens likely joined the selling spree, using online applications. The source of the public banks’ sales was not hard to guess. The central bank had burned through $128 billion in foreign reserves in 2019 and 2020 in similar back-door interventions to prop up the lira. Indeed, central bank data released in ensuing days showed a nearly $7 billion drop in the bank’s net foreign assets on Dec. 20-21.

So it all looked like a coordinated operation. As Erdogan announced the new deposit scheme, public banks began a simultaneous sale of hard currency, made available by the central bank, and soon the managers of two major lenders, the public Ziraat and the private Is, were hailing how Erdogan’s measures had sparked a return to the lira.

That’s how the lira rebounded from its historic low of 18.36 versus the dollar to as high as 10.23 in a few days, with most of the surge taking place on the night of Dec. 20. As Erdogan put it, “We saw the bubble on the foreign exchange rates disperse in a day with our package of measures.”

Yet the operation has attracted a storm of criticism as pundits, opposition parties and ordinary citizens question why the government left the populace clueless about its plans and allowed the rush for dollars to continue as Erdogan sharpened his tone on his unorthodox economic views, fanning fears of spiraling inflation.

Many have likened the government’s move to “ambushing” or “trapping” its own people. Faik Oztrak, the spokesman of the main opposition Republican People’s Party, tweeted, “Erdogan himself fueled the increase of exchange rates … and now he calls it a bubble. And he is making fun of the people, saying he dispersed the bubble in a day. What you did was not dispersing a bubble but laying a trap for the nation and ripping the people off. And the people will respond in kind at the ballot box.”

Treasury and Finance Minister Nureddin Nebati, who took over the post less than a month ago, sought to defend the operation at first, saying that it was only natural for the state “to use all the instruments” at its disposal. Soon he changed tune, denying that public banks were involved. “They did not sell dollars that night. Public banks were not involved. It was retail sellers who stepped in. They virtually competed with each other [to sell dollars],” he said Dec. 27.

As the details emerged, the government stepped up attempts to suppress the criticism. Durmus Yilmaz, a former central bank governor who is now an opposition lawmaker, was the first to get a warning from Erdogan that he would “pay a price.” Then, the banking watchdog said it had filed criminal complaints against 26 people — among them Yilmaz, another former central bank chief, and economy commentators, including this author — for comments “aimed at manipulating foreign exchange rates.”

As for the scheme itself, its viability remains unclear. The slump has been contained for now, but there is no indication that a return to the lira is under way. On the contrary, official data show that hard-currency deposits have not decreased, meaning that the new scheme has attracted little interest thus far. To increase its appeal, banks have raised interest rates by several percentage points, while the central bank has offered fresh incentives to banks to promote the scheme. The impact of all those measures remains to be seen.