Turkey’s runaway inflation soars to near 79%

The Turkish government’s continued failure to stabilize the battered lira raises the prospect of inflation topping 100% in the fall. 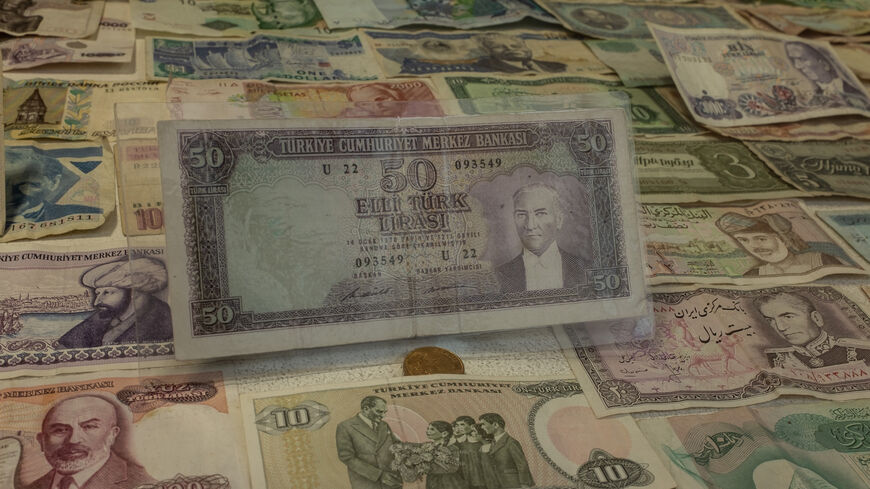 Obsolete Turkish lira banknotes are seen in the window of an exchange office on May 05, 2022, in Istanbul, Turkey. - Burak Kara/Getty Images

Consumer prices in Turkey rose 4.95% in June, bringing annual inflation to 78.6%, the highest reading since 1998, according to official data released Monday.

The spiraling inflation — fueled mainly by the slump of the lira since September when Ankara embarked on a controversial policy to promote growth by pushing the central bank to cut interest rates — threatens to top 100% in the fall if price increases continue at the current pace.

The highest price increases in June were in the transport group, topping 10% on a monthly basis and 123% over 12 months. Fuel prices alone rose 22% in June. In the food group, which has been a major driver of the overall inflation, the increase was limited to 2% in June as vegetable prices dropped 25% with the advent of summer. Nevertheless, annual food inflation reached nearly 94%. The 8.3% rise in housing prices was the second highest in June, bringing the annual increase to 75%.

The cost-of-living crisis is bound to top Turkey’s agenda in the coming months, regardless of whether the next presidential and parliamentary elections are held on time in June 2023 or brought forward.

Despite the heavy blows he is taking from the inflation surge, President Recep Tayyip Erdogan has refused to focus on an anti-inflationist policy, wary of the austerity measures it would require. With crucial polls looming within a year, he is averse to measures that would shrink the markets, lead to company closures and increase unemployment, while forcing the government to tighten spending on social welfare and investments.

Instead, Erdogan has opted to promote growth and reach the elections with an expanding rather than contracting economy. Turkey’s gross domestic product is estimated to have grown more than 5% in the second quarter after expanding 7.3% in the first one. Yet Erdogan’s policy has only fueled inflation, and the economic growth it has produced has been marked by deepening income disparities.

Ankara has failed to curb inflation because it has failed to curb the fall of the lira. For Turkey’s import-reliant economy, rising foreign-exchange prices translate to rising costs, pushed further up by the global increase in commodity prices, chief among them energy. The country’s importation bill has soared to a monthly average of nearly $30 billion this year. Domestic producer prices have increased by a monthly average of more than 8% since January, bringing annual producer inflation to over 138% in June.

The accumulating producer costs will inevitably reflect on consumer prices down the road. Assuming that the monthly price increases remain at about 5% in the coming months, annual consumer inflation would hit 106% in November before the base effect brings it down to 91% in December.

What makes this gloomy scenario probable is the continued decline of the lira despite all government measures to prop up the currency and reign in foreign-exchange prices. After the lira plunged to a historic low past 18 versus the dollar in December, Ankara introduced the so-called forex-protected lira deposits, a scheme under which it compensates lira depositors for any losses incurred by the slump of the currency. Despite its initial rally, the lira fell back to the region of 17 against the greenback in six months. The scheme has cost 21 billion liras ($1.25 billion) in public funds, and Ankara allocated another 40 billion liras ($2.4 billion) for the scheme in a supplementary budget proposal submitted to parliament last month. As the costly scheme failed to yield the desired results, the government imposed a series of restrictions on exporters and big corporations to keep them from holding large amounts of hard currency.

Despite such capital controls, the gains of the lira have been volatile, with the currency trading at about 16.8 against the dollar on Monday afternoon.

Cumulative inflation reached 42.3% in the first half of the year, meaning that some 15 million public servants and retirees will see their salaries and pensions increase by about 43% in July under existing inflation-adjustment regulations. The adjustment is a retrospective compensation for the past six months; thus, it is not a shield against future inflation and does not amount to a real pay raise.

Due to the dizzying pace of inflation, public pressure built up on the government to increase also the minimum wage, which has become the prevalent pay in Turkey, with nearly half of employees — some 10 million people — getting the minimum wage or slightly higher salaries. The minimum wage is normally reviewed only once — at the turn of the year — and was hiked by 50.5% to 4,253 Turkish liras (about $250 with current rates) in December.

Ergun Atalay, head of Turkey’s largest confederation of trade unions, Turk-Is, pressed for an increase of the minimum wage in a meeting with Erdogan in mid-June, stressing that minimum-wage earners “cannot tolerate” the price increases until the normal review in December. The government felt compelled to go along, even though it was not legally obliged, and last week the minimum wage was raised by 30% to 5,500 liras (some $330) as of July.

The raise was met with criticism for falling behind the official inflation rate of the past six months. It also weakened the prospect of the government calling early elections in November as some have anticipated. Erdogan, the argument goes, would have been more generous had he planned early polls in the fall. Either way, the inflation storm remains the primary economic menace to Erdogan. The longer it takes to go to elections, the more his political fortunes are likely to suffer.