Consumer inflation has surged to a fresh two-decade high in Turkey as external headwinds spawned by Russia’s invasion of Ukraine add to the country’s own economic woes. 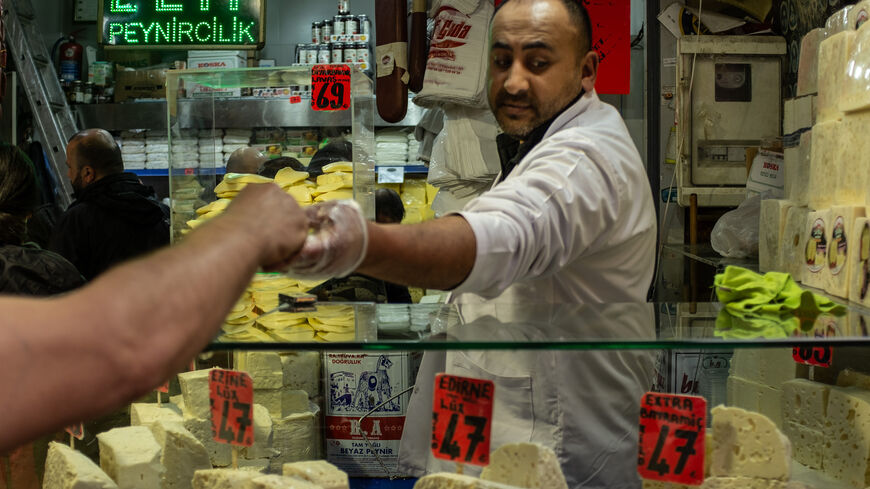 People shop in a busy market ahead of the start of the holy month of Ramadan on April 1, 2022, in Istanbul, Turkey. - Burak Kara/Getty Images

Turkey’s annual consumer inflation jumped to a new two-decade high of 61.1% in March from 54.4% the previous month as prices rose nearly 5.5% in March alone, fueled by the commodity shock of Russia’s invasion of Ukraine.

Producer prices, meanwhile, rose by about 9.2% in March, bringing annual producer inflation to nearly 115%, according to data released Monday by the Turkish Statistical Institute.

Standing out in the consumer inflation is the transport group, where prices rose more than 13% in March. Fuel prices, in particular, saw a string of almost daily hikes as a result of global oil price increases last month. The price of diesel, for instance, rose by an unprecedented 32% over a month. And with the added impact of price increases in the import-reliant automobile category, the transport group became the leading driver of inflation in March.

In the food group, which is assigned a 25.3% weight in the consumer inflation index, prices rose 4.7% in March, stoked by problems in the supply of a number of imported goods such as sunflower oil due to the war in Ukraine. Annual food inflation topped 70%.

In the services group, prices rose some 4.2% in March.

The impact of the global economic fallout from Russia’s invasion of Ukraine was, no doubt, significant in fanning inflation in Turkey and is expected to continue to do so in the coming months. It comes atop domestic factors that were already stoking inflation. The controversial economic policies of President Recep Tayyip Erdogan’s government have made the Turkish economy more fragile and food inflation, in particular, has become unrestrainable amid Ankara’s failure to address long-running problems in the agricultural sector. Moreover, the government has prioritized encouraging growth over fighting inflation ahead of presidential and parliamentary elections scheduled for June 2023.

The signs of a brewing inflation storm were already visible in the beginning of 2021, but Erdogan’s government paid them little regard and continued to prioritize economic growth, which reached 11% last year. The spectacular rate owed much to domestic demand driven by consumers bringing forward spending before prices increased further or putting money in real estate to protect the value of their savings against inflation, fueled mainly by the severe depreciation of the Turkish lira last year. Erdogan, happy with the strong growth rate, seemed reluctant to acknowledge the problem. Annual consumer inflation hit 36% at the end of 2021, jumping to 48.7% in January and 54.4% in February, with monthly price increases of 11% and 4.8%, respectively.

With Erdogan counting on economic growth to boost his electoral fortunes, his government has shown little intention of enacting deflationist measures to cool the economy. Ankara’s monetary and fiscal policies remain expansionary. The loan volume has already expanded by more than 44% year-on-year, with borrowing rates standing at about a half of the current inflation rate. And under a scheme to compensate lira deposits against any slump of the currency, the treasury has effectively assumed a significant burden of interest costs.

Turkey’s economy is on course to grow at least 5% this year. Gross domestic product is estimated to have grown 5.4% in the first quarter from the same period last year, according to a forecast by the Center for Economic and Social Research at Istanbul’s Bahcesehir University, based on fully released lead indicators for January and partially released ones for February. The GDP is estimated to have grown 0.5% in the first quarter in comparison with the previous quarter, based on seasonally adjusted data. The International Monetary Fund forecasts that the Turkish economy will grow 3.3% this year, while the World Bank’s estimate stands at 2% and that of the Organization for Economic Cooperation and Development at 3.1%.

Yet Ankara’s growth appetite is bigger than those estimates, nourishing an environment that fans inflation along with the global factors.

Inflation has hit a four-decade high in the United States, a three-decade high in Britain and an all-time high in the euro zone as a result of a combination of headwinds in recent years. The COVID-19 pandemic led to an abundance of cheap money in 2020 and 2021. Governments loosened their fiscal policies to support households and the real sector. The pandemic disrupted global supply chains and logistical hardships led to a spike in transportation costs. Energy prices increased at a dizzying pace. The mess had yet to be cleared up when Russian troops stormed into Ukraine in late February. Despite international peace efforts and talks between the two sides, the conflict appears bound to drag on.

With Russia one of the world’s leading energy and commodity producers, the war has further pushed up the prices of energy and other commodities. The price of Brent oil, which stood at $74 a barrel at the end of 2021, had already soared to $96 in February. The surge continued after the invasion, reaching $124 a barrel on March 8, for instance. Despite efforts to increase supply, the price remained above $100 a barrel in early April. Global gas and coal prices have also soared, as have the prices of agricultural raw materials, metals and other key commodities.

For Turkey’s import-reliant economy, all this has meant additional cost and price increases atop an already galloping inflation amid the country’s existing economic fragilities. Given Turkey’s heavy dependence on imported oil and gas, the increase in energy prices is bound to further push up prices in the transport group, including fuel, in the coming months. Diesel is the most important item in the group as both agricultural producers and freight businesses rely heavily on diesel, which in turn is having a direct impact on the cost of food.

The economic fallout of the Ukraine war has heightened the wariness of foreign investors and Turkey’s risk premium has soared. As a result, the Turkish lira, which lost more than 40% of its value against the dollar last year, has tumbled anew despite the government-backed deposit scheme introduced in December to prop up the currency. The price of the dollar averaged 14.6 liras in March, a 7% increase from 13.6 liras in February. It made Turkey’s imports more expensive, adding to producer costs and then to consumer prices.

The inflation jump in March and signs of a continued surge in the coming months are bad news for Erdogan politically. Growing livelihood strains are the number-one issue of the masses as skyrocketing prices erode purchasing power by the day. Last month, Erdogan appeared to acknowledge that the minimum wage — the pay that nearly half of employees in Turkey receive — was already dwarfed by inflation despite a 50% hike at the turn of the year and signaled an additional hike. Yet he backpedaled within several days, saying that the minimum wage — 4,250 liras (about $300) — would be hiked as usual at year-end. Some observers have attributed his zigzagging to his election plans as the prospective hike of the minimum wage is seen as one of his carrots.