Turkish inflation jumps from 20% to 70% in just six months

Even if monthly price increases ease to an average of 5% in the coming months, Turkey would face an annual consumer inflation of over 100% in the fall and finish the year with a rate of some 90%. 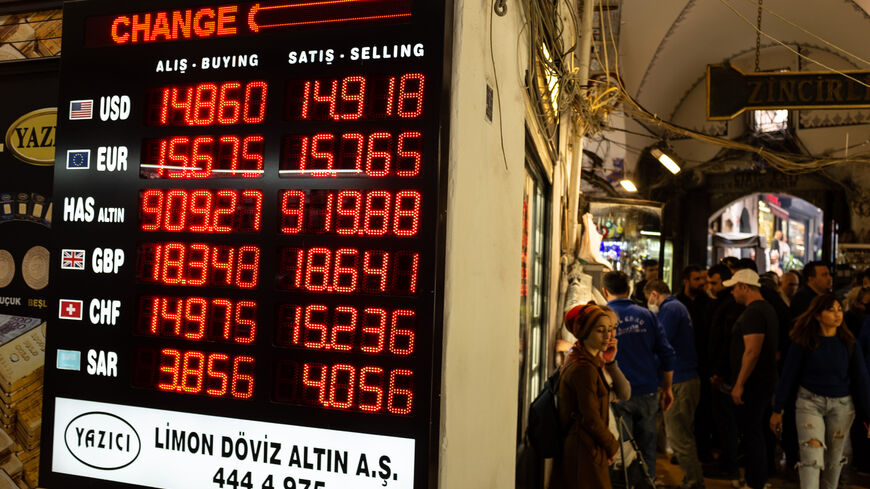 People walk past a currency exchange office at Istanbul's Grand Bazaar on May 05, 2022, in Istanbul, Turkey. Inflation soared to nearly 70% (69.97%) over one year in April in Turkey, the highest since February 2002, according to official figures released on May 5. - Burak Kara/Getty Images

Turkish consumer prices rose 7.25% in April and annual inflation hit 69.97%, more than tripling in just six months — a price explosion with few precedents in the recent history of the country.

Food, clothing and transport prices were among the major drivers of inflation in April, according to data released Thursday by the Turkish Statistical Institute. And although the central bank significantly hiked its year-end inflation forecast to 42.8% last week, it appears bound to miss the mark, with the annual rate likely to reach the range of 80% to 90% in December.

The dizzying price increases have been the public’s No. 1 concern in recent months, plunging millions into grave livelihood woes ahead of elections next year. Though external factors such as the economic fallout of the Ukraine war have added to the inflation surge, President Recep Tayyip Erdogan is seen as primarily responsible for the problem, which is casting a big cloud of uncertainty over the country, both economically and politically.

Back in September, when annual inflation stood at about 20%, Erdogan pressured the central bank to lower its 19% policy rate, insisting on the unorthodox view that high interest rates are the cause of high inflation. The bank’s four cuts in as many months brought the benchmark rate to 14% in December. The controversial policy sent the Turkish lira into a tailspin and fueled dollarization, with the ensuing spike in inflation spiraling out of the control.

Erdogan, meanwhile, kept assuring the nation that his policy would galvanize the economy and rein in inflation.

In late November, when annual consumer inflation stood at 21.3%, Erdogan maintained that lower interest rates would bring about economic growth by boosting investments, employment, production and exports. “This will manifest itself also in [slowing] inflation at the year-end,” he told public broadcaster TRT. “As I always say, interest rates are the cause and inflation is the result. We are now reducing the interest rates and, God willing, we’ll see inflation decrease as well.”

Contrary to his forecast, consumer inflation jumped to an annual of 36% in December. Yet Erdogan continued to herald a decrease in inflation. Speaking at a rally in the northern city of Giresun in January, he said, “You know of our struggle against interest rates. We have been lowering interest rates … and you should know that inflation, too, will fall.” He boasted also of “not letting inflation crush the people” by raising public-sector salaries and pensions as well as the minimum wage, which was hiked by 50% to 4,250 liras ($286) at the turn of the year.

Still, annual consumer inflation soared to nearly 49% in January before topping 54% in February and 61% in March. As of March, the surge in inflation outstripped the pay and pension rises that Erdogan was lauding, resulting in real income losses for millions.

But Erdogan’s rhetoric has remained unfazed. As recently as last week, he pledged his government would “defeat inflation” and “extinguish the fire [of prices] at the markets.”

Food inflation has been the unruliest, dealing heavy blows to the populace in a country where food accounts for 25% of household spending, with the rate reaching up to 40% in low-income groups. Food prices rose about 13.5% in April, bringing the annual increase to nearly 90%.

Expectations that food inflation will slow in the spring and summer months could hardly be taken for granted given the surge in the prices of inputs in the agricultural sector. The prices of key inputs such as diesel, fertilizers, pesticides and farm machinery increased up to 81% on annual basis in February, while the prices of agricultural producers were up by 68.5%, meaning that they suffer real income losses. Farmers are forced to hike prices as much as they can or they will be unable to sustain production. Subsidizing input prices could be a way to alleviate the problem, but government measures in support of agriculture have always been inadequate and far from motivating farmers.

In the housing group, prices rose 7.4% in April, stoked by hikes on utilities such as water and gas.

Though fuel prices stabilized to a certain extent under the impact of global trends, the prices of inner-city public transport services provided by local administrations and taxi fares increased, as did the prices of intercity transport. Automobile prices saw certain hikes as well. Overall, prices in the transport group rose 5% in April, with the annual increase reaching 105%.

Standing out in April were also a 7% increase in clothing prices amid the advent of the warm season and an equal increase in the prices at restaurants, cafes and bars, driven by the rising food and beverages prices.

The food group contributed 22 percentage points to the 70% annual inflation, followed by the transport group with 16 points and housing with 9 points. Those three categories alone contributed some 47 percentage points, with the remaining 23 points coming from nine other groups.

Where is Turkey’s consumer inflation headed?

Treasury and Finance Minister Nureddin Nebati said last month that inflation would start to decrease in December, thus acknowledging that the price increases would continue until then. Even if monthly inflation eases to an average of 5% in the coming months, Turkey would face an annual rate of over 100% in October and November and finish the year with an inflation of up to 90% in December.

On April 28, the central bank revised its year-end inflation forecast to 42.8% from 23.2% three months ago. Despite the significant hike, few regard the bank’s projection as credible against the 90% forecast widely shared by independent watchers.