Despite a relative slowdown in July, Turkey’s consumer inflation appears on course to overshoot the central bank’s newly revised year-end forecast of 60.4%. 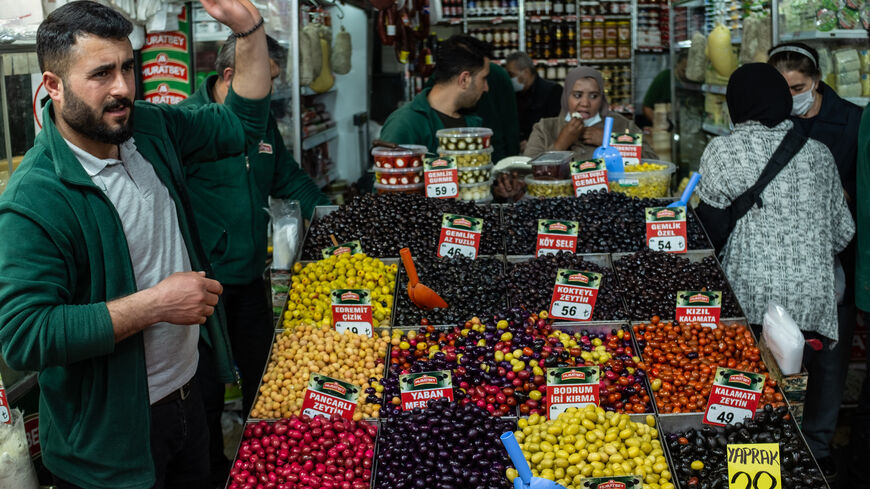 People shop in a busy market ahead of the start of the holy month of Ramadan on April 1, 2022, in Istanbul, Turkey. The war in Ukraine, one of Turkey's largest suppliers of wheat, has compounded Turkey's already rising inflation and cost-of-living woes. - Burak Kara/Getty Images

Turkey’s annual consumer inflation climbed to 79.6% in July, official data showed Wednesday, and the uptick appears months away from topping out, with President Recep Tayyip Erdogan sticking to a controversial policy against hiking interest rates.

Consumer prices rose 2.37% in July, marking the lowest month-to-month increase since January thanks to a relative slowing in food inflation, a drop in fuel prices and the Turkish lira’s relatively small losses against hard currencies. Nevertheless, annual inflation appears on course to overshoot the central bank’s year-end projection of 60.4%, revised upward from 42.8% just last week.

External factors, chief among them the sharp increase in energy prices after Russia’s invasion of Ukraine in February, have contributed to Turkey’s economic woes, but Erdogan’s low-rate policy is widely seen as the main culprit of the country’s inflation storm since last year. At the behest of Erdogan, who holds the unorthodox view that higher rates cause higher inflation, the central bank has kept its policy rate at 14% since mid-December, when it delivered the last of four consecutive rate cuts totaling 500 basis points despite inflation standing around 20% at the time. In other words, the bank has discarded its key weapon against inflation, while its counterparts in the United States, the euro zone and elsewhere have been hiking rates to tackle the global rise of prices.

The runaway inflation has further hit the embattled lira, prompting saving holders to seek refuge in the dollar. The price of the greenback averaged 17.4 liras last month, a 102% increase from 8.5 liras in July 2021.

Foreign currency prices are crucial for the Turkish economy, which is heavily reliant on imported goods and inputs, chief among them energy. In July, the average price of the dollar was up only 2.5% from June, while that of the euro was down 1%. In comparison, the average dollar price had increased 8.6% in June and 6.4% in May. But the moderate price climate of July is hardly expected to continue in the coming months.

In the food group, which is assigned a 25% weight in the inflation basket, prices rose 3.2% last month, with annual food inflation hitting nearly 95%. Vegetable and fruit prices eased about 9% last month following drops of about 20% in May and June. Yet the prices of bread, meat and dairy products continued to soar. Bread — an indispensable staple for low-income families in the country — has seen back-to-back price hikes amid rising flour and energy costs. Bread prices rose 7% in July alone and some 97% over a year.

In the transportation group, a key driver of consumer inflation in previous months, fuel prices dropped notably in July and annual inflation in the rubric eased to 119% from over 123% in June. The drops, including 14% in gasoline prices, 9% in diesel prices and 5.5% in liquified petroleum gas prices, removed about half a percentage point from the overall consumer inflation rate. Along with that direct impact, the cheapened diesel helped ease or prevent hikes on goods and services across the board.

Tobacco prices, the fourth weightiest in the inflation basket, rose 7.5%, adding 0.3 percentage points to the consumer price index in July.

In the services category, health care prices climbed 7% last month, driven by hikes of up to 30% on medicine prices, as the year-on-year rise topped 48%. Communication services such as phone and internet saw price hikes of 4.5%, with the annual increase soaring to 55%.

The overall slowdown in July appears hard to sustain because the trend in foreign currency prices, the main driver of inflation in Turkey, is upward. Both domestic and external developments bode strong pressures on the Turkish lira down the road.

Monetary tightening and rate hikes in the United States and the euro zone are producing headwinds for the Turkish economy. The markets of Turkish exporters have begun to contract, and Turkey’s prospects of attracting foreign capital have further faded at a time when it needs to finance a significant current account gap. Many enterprises have come to stock up on imported inputs to avoid even higher costs down the road, adding to the country’s foreign trade deficit, with tourism revenues falling short of making up. Moreover, Turkish debtors face repayments of $182 billion to foreign lenders in the next 12 months. And while many locals have put their savings in a government-sponsored lira deposit scheme, they keep an eye on hard currencies as an alternative safe haven against inflation and the slump of the lira.

Thus, the demand for foreign currency in Turkey remains high despite hopes of a drop in global energy prices. And each increase in foreign currency prices means higher costs for producers and eventually higher consumer prices. Annual producer inflation stands at 144.6%, rising 5.17% in July alone.

Even if the pace of inflation in the coming months remains limited to some 2.4% as in July, the annual rate would hit 86% in November at best before dropping to 67% in December due to a stronger base effect. That would still be well above the central bank’s newly revised forecast of 60.4%.