Soaring prices lie at the core of Erdogan’s sagging popular support and he seems to have few tools to curb the unruly uptick. 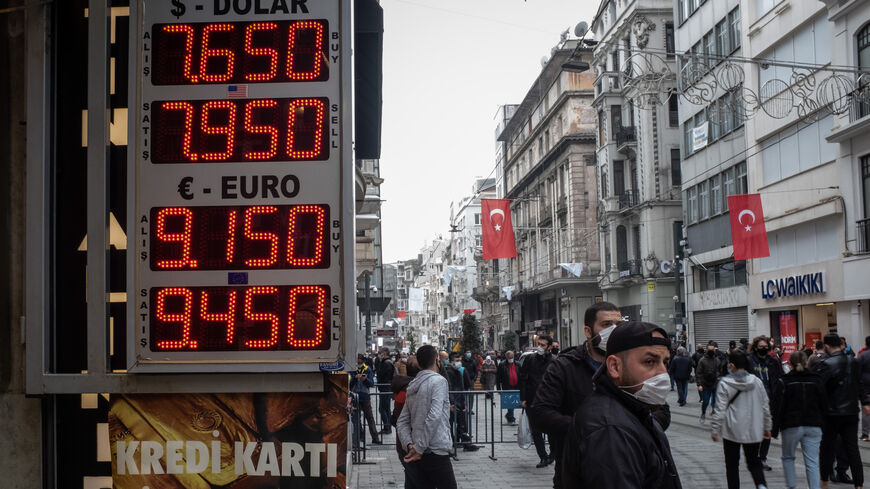 People walk past a currency exchange board on March 22, 2021 in Istanbul, Turkey. - Chris McGrath/Getty Images

Turkey’s annual consumer inflation threatens to soar to more than 20% as official data showed a two-year high of 17.5% in June amid growing popular frustration with President Recep Tayyip Erdogan’s government.

While Ankara’s consumer inflation target stands at 5% this year, the rate is likely to rise to 19% in July under the impact of a combination of factors, including recent price hikes on electricity and natural gas, which alone could add one percentage point to the rate. The heightened energy cost of producers will inevitably push prices up.

Moreover, consumer inflation was already under the heavy pressure of producer inflation, which rose another four points in June to hit 42.9% over a year. Producer prices have been fueled mainly by the ongoing slump of the Turkish lira, which is aggravating costs in Turkey’s import-dependent economy. The big gap between consumer and producer inflations is a harbinger of further increases in consumer prices down the road that are likely to bring the rate to 20% in several months.

With an inflation of 20%, the central bank’s benchmark interest rate of 19% would become irrelevant. The government has been eager for a rate cut, but the unyielding inflation stands in the way. Normally, the central bank would have to consider a rate hike to rein in inflation, but given Erdogan’s stern opposition to high interest rates, such a prospect remains uncertain. In short, Ankara’s economic management is vacillating without any efficient remedy at hand.

Yet popular frustration with the government is growing over rising prices, falling purchasing power and unemployment. The out-of-control inflation, including soaring food prices, has been dealing the heaviest blows on Erdogan’s popular support and there seems to be little he could do in the coming days to reverse the uptick.

Normally, June is among the months when inflation is lowest in Turkey. According to some observers, an extraordinary factor this year was the reopening of the economy in June after COVID-19 restrictions eased, which led to price adjustments, especially in the services sector. Yet, this could hardly explain the situation away. As Al-Monitor earlier emphasized, a number of ossifying dynamics have been stoking inflation in Turkey.

First of all, the Turkish economy remains heavily dependent on imports, which, coupled with the depreciation of the lira, means that it is vulnerable to the surge in global commodity prices, especially oil, and disruptions in global supply chains. Each increase in the cost of foreign exchange bears on the prices of Turkish producers and then reflects on consumer prices.

This only compounds the climate of uncertainty in the Turkish economy, which is closely related to the country’s transition to an executive presidency system in mid-2018. The new system, which concentrated power in Erdogan’s hands and led to severe institutional erosion, has failed to inject confidence in foreign investors, as evidenced by the country’s risk premium, reflected in credit default swaps. It has typically hovered around 400 basis points, about three times higher than the risk premiums of the closest peer countries, surging to the region of 500 at times. It has meant a significant drop in the inflow of foreign funds and even the flight of many investors, resulting in a shrinking foreign exchange supply and rising foreign exchange prices.

The lira has kept losing value since the currency turmoil that hit Turkey shortly after Erdogan became executive president in June 2018. The price of the dollar, for instance, has increased about 86% to some 8.6 liras from 5.8 liras three years ago. Producer prices have soared nearly 90% in the same period. Consumer prices, meanwhile, have surged about 53%, experiencing a less direct and slower impact from the uptick in foreign exchange prices.

Past statistics suggest that each 10-percentage-point increase in producer prices adds four to five points to the consumer inflation rate. During the pandemic, however, the increase in oil prices has not been fully reflected on consumer prices via the country’s automatic price adjustment system, as Ankara lowered the special consumption tax (OTV) levied on energy products. As Erdogan boasted July 5, “We are supposed to take two liras in OTV from diesel fuel and 2.5 liras in OTV from gasoline, but we take [respectively] 71 piasters and 83 piasters.”

Thanks to this cushion on fuel, consumer prices have likely been spared a six-percentage-point increase, according to an optimistic estimate. Still, the big gap between producer and consumer inflations means that up to 10 percentage points could be still reflected from producers to consumers. In other words, this transitivity alone could easily send consumer inflation above 20% in the coming months, barring any significant decline in global commodity prices and foreign exchange rates in Turkey.

All those factors require the central bank to consider raising its policy rates. Yet, it has been mum on any further monetary tightening, arguing instead that inflation will ease in the last quarter and eventually fall to about 12%.

Turkey is facing headwinds from the United States as well. The Federal Reserve has begun discussions on scaling back bond purchases, and economic watchers expect a decision to that effect by fall. The US job market is expected to strengthen in the coming months, especially after September, with the unemployment rate likely to drop back to about 4%. US inflation is on the rise on the expected pace. All those developments portend a decrease in foreign capital flows to Turkey and other emerging economies. And less foreign funds would mean higher foreign exchange prices and thus further inflationist pressures.