Despite a galloping inflation topping 83%, Turkish President Recep Tayyip Erdogan has doubled down on his controversial monetary policy, urging the central bank to cut its policy rate to single digits by the year-end. 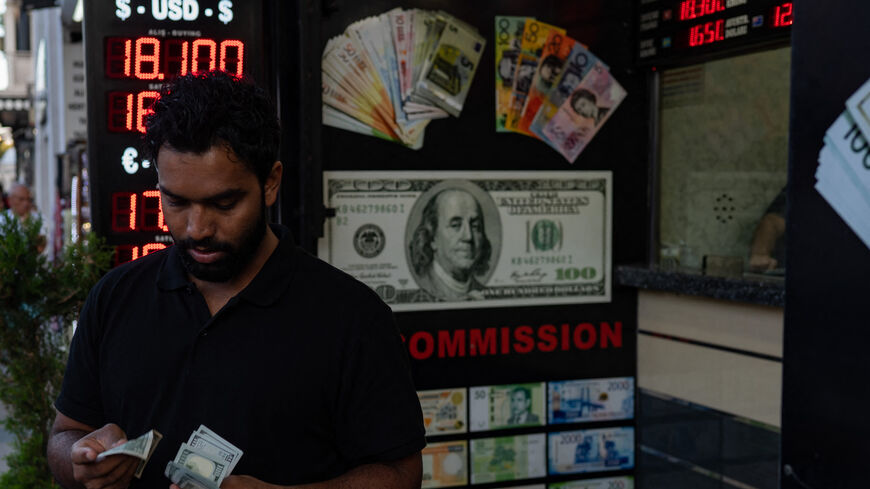 A customer holds US dollar banknotes outside a currency changer as Turkey's economy is suffering its biggest economic crisis in decades, Istanbul, Turkey, Sept. 6, 2022. - Yasin Akgul/AFP via Getty Images

The unprecedented 71.5-percentage-point gap between inflation and the bank’s policy rate is the result of President Recep Tayyip Erdogan’s belief that reducing interest rates helps curb inflation, which is the opposite of what mainstream economic theory says. Going against a global monetary tightening cycle to tame prices, Turkey’s central bank has been cutting rates at Erdogan’s behest since last year, fueling the fall of the Turkish lira. Nevertheless, Erdogan could still come up with ways to argue that his policy is bearing fruit as he seeks to patch up his dropping popular support ahead of elections due in June 2023 at the latest.

Inflation in September was driven by electricity and gas hikes of 20% and 21%, respectively, as well as price increases of up to 2% on food and up to 7% in the education group. Housing costs alone rose nearly 10% on a monthly basis.

Producer prices, meanwhile, soared 4.78% in September from the previous month, bringing the annual increase to 151.5%. The 12-month average of producer inflation constitutes the basis for hikes on public sector goods and services as well as taxes, fees and fines. That average is likely to top 100% at the turn of the year, meaning that hefty hikes are already looming from the public sector alone.

Turkey today has the highest inflation among major economies, overtaking crisis-ridden Argentina, whose rate stood at 78.5% in August. Even more strikingly, while its annual inflation soared to 83.45% from less than 20% a year ago, Turkey did away with a key inflation-fighting tool as the central bank brought its policy rate down to 12% from 19% in the same period. None of Turkey’s emerging market peers have a comparable gap between their inflation and benchmark interest rates.

In the world’s leading economies, including the United States, Britain and the Euro Zone, central banks have been raising rates as well to stem the money supply and rein in inflation at the expense of forfeiting growth.

Erdogan, for his part, has prioritized growth at any cost instead of fighting inflation, hoping that such a course would minimize the political cost of Turkey’s economic turmoil in the lead-up to the polls.

In a bid to rationalize this election-focused approach, Ankara argues that it is following “heterodox policies” designed to avoid recession. In a speech Sept. 29, Treasury and Finance Minister Nureddin Nebati said, “Many developing countries that have been using orthodox monetary policies to tackle the supply-driven inflation have entered recession or experience recession fears. In contrast, Turkey’s economy … grew 7.5% in the first quarter and 7.6% in the second one.”

In 2018, when Turkey transitioned to an executive presidency system that bestowed sweeping powers to Erdogan, inflation jumped sharply to over 20% as the lira tumbled, while the economy grew 3%. The following year, inflation was brought down to about 12%, with the growth rate dropping to less than 1%. In the pandemic-hit 2020, inflation was close to 15% and the economy grew about 2%. As the impact of the coronavirus pandemic eased, Turkey’s economy grew 11.4% last year, with inflation surging to a menacing 36%.

But instead of tackling the surge, Erdogan continued to promote growth by pushing for rate cuts and thus cheaper loans issued mostly by public banks. The central bank began to lower its policy rate in the fall of 2021, delivering four cuts in as many months. Following two fresh reductions of 100 basis points each in August and September, Erdogan urged the central bank to further lower the rate so that it reaches single digits by the end of the year. Expectation is now building that the bank will cut the 12% benchmark to 9% by the year-end, stoking growth.

Meanwhile, the annual inflation rate is expected to peak to 84% in November before dropping to about 65% in December, about 55% in January and about 50% in February as high base effects from the previous year kick in. Eager to win back disgruntled voters, Erdogan is likely to make use of this largely arithmetic downtick to argue that his low-rate policy has begun to bear fruit.

Despite the deceleration, however, the prices would continue to increase and consumers would feel little relief unless they receive meaningful pay increases. Hence, the government is also expected to be open-handed on raising incomes at the end of the year, bent on pleasing voters ahead of the polls.