Even though Turkey’s economy continued to expand in the second quarter, the share of payments to employees dropped to the lowest level since Erdogan’s party came to power two decades ago. 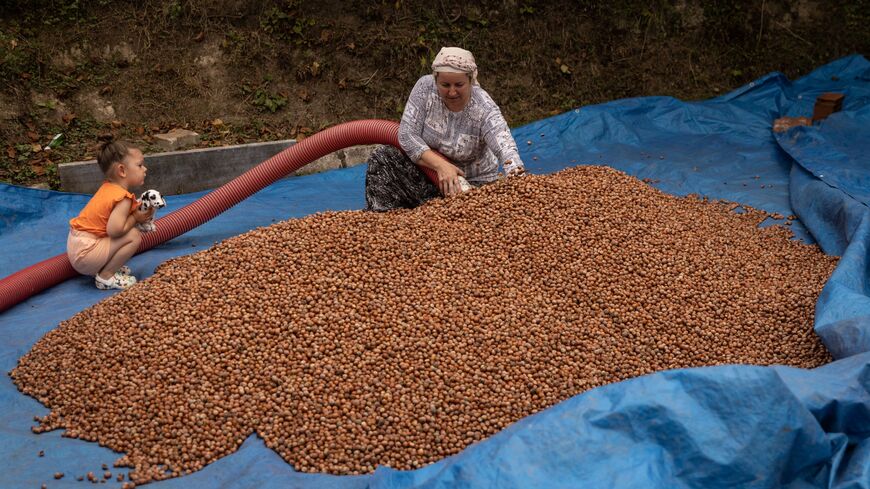 Hazelnut farmer Emina spreads hazelnuts out for drying after harvesting on August 27, 2022 in Ordu, Turkey. Turkey's rising inflation is taking a toll on the region's hazelnut farmers and could soon see supplies shrink. - Chris McGrath/Getty Images

With presidential and parliamentary polls less than a year away, Turkey’s government has bet on growth to contain popular grievances, but runaway inflation and a foreign-currency crunch is producing deeper poverty.

Consumer prices in Turkey rose 1.46% from July to August, official data showed Monday, with annual inflation surging to a 24-year high of 80.21%.

Inflation has soared since September 2021 amid the slump of the Turkish lira, fueled by unorthodox rate cuts by the central bank. The surge in global energy and commodity prices after Russia’s invasion of Ukraine in February has only made matters worse.

Heralding further inflationary pressures, the Turkish authorities announced fresh price hikes on gas and electricity on Sept. 1 — around 20% for households and around 50% for enterprises.

Energy expenses are a major item in the housing category of the inflation basket, in which prices rose 2% in August, bringing the annual rate to nearly 72%.

Food prices rose around 0.9% in August, with annual food inflation reaching 90.3%. The price of bread alone — an indispensable staple for low-income consumers — rose more than 101% over a year.

The recent relative easing in global energy prices resulted in partial reductions in gasoline and diesel prices last month, contributing to a 1.8% decline in prices in the transportation group. Nevertheless, annual inflation in this category stood at a whopping 117%.

The prices of durable goods such as furniture, whiteware and electronic appliances rose 3.3% in August. The months-long uptick brought annual inflation in the sector to over 92%.

Under the impact of the high season in tourism, prices in the hotels, cafes and restaurants group were up by about 3.3% in August, with the annual rate climbing to nearly 81%.

And with the advent of the new school year, prices in the education group shot up by 6.5% in August. In the health group, the price increases hit 7%.

In a further sign of more hikes on consumer prices in September and the ensuing months, the pace of producer prices remained faster. A monthly increase of 2.4% in August brought annual producer inflation to the staggering rate of almost 144%.

Moreover, the 12-month average of producer inflation in October will constitute the basis for next year’s hikes on public sector goods and services. That means duties and fees charged by the state and the prices of public transport and other services would be raised by an estimated 125%, which alone is an omen that the inflation storm will barely ease in 2023.

The working classes can hardly cope with inflation topping 80%, as the ostensible pay hikes lag well behind the price increases. With real incomes melting, relative poverty is deepening — a trend confirmed by the latest gross domestic product (GDP) data, released on Aug. 31.

On the shiny side of the coin, President Recep Tayyip Erdogan’s ambitions to keep the economy hot despite the galloping inflation resulted in a GDP growth of 7.5% in the first half of the year. Turkey’s GDP had grown 11.4% in 2021. Yet the factors that contributed to this expansion are hardly sustainable.

The GDP growth has been achieved mainly through cheapened exports and a rush for goods among consumers scrambling to protect their savings against inflation.

Amid the continued slump of the Turkish lira and the uncertainty caused by Ankara’s interventions to rein in foreign-currency prices, many saving holders chose to put their money in homes, cars and durable household goods. This trend of apprehension-driven consumption provided headwinds for the industrial and services sectors. Also, Turkish exporters' competitiveness increased due to the depreciation of the lira. But the accompanying inflation, coupled with an alarming current account gap and the Treasury’s deficits, dampens hopes of maintaining that growth pace in the remainder of the year.

Moreover, the economic growth has worsened income disparities. Payments to employees amounted to 25.4% of gross value added in the second quarter of the year, down from 36.8% in the second quarter of 2019, the year before the pandemic. The net operating surplus — or the share of employers — rose to 54% from 45% in the same period. The 25.4% share of labor is the lowest under the 20-year rule of Erdogan’s Justice and Development Party.

The net operating surplus of companies, particularly the financial sector, has steeply increased over the past year in particular. Korkut Boratav, a veteran Turkish economist, attributes the widening income gap to three main reasons: “the excessive pumping of cheap credit to companies by the central bank, public banks and the Palace [Erdogan’s administration]; the denial of [adequate] public financial resources to laborers and the unorganized state and helplessness of the popular classes in the face of inevitable inflation.” For Boratav, it’s “an environment of savage capitalism,” with banks and corporates “running the show within the framework created by the Palace.”