Turkey’s flashy growth rate in 2021 has been accompanied by a dangerous uptick in inflation and appears bound to drop sharply this year. 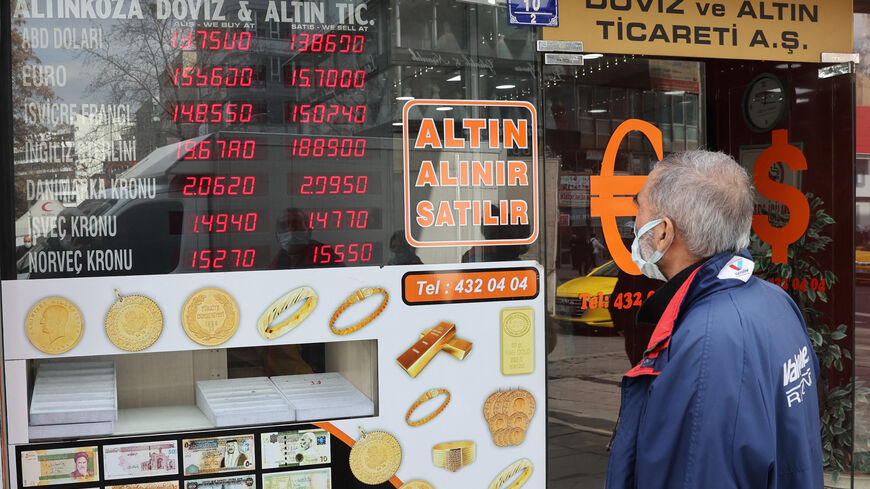 A man looks at exchange rates outside an exchange office in Ankara, Turkey, on Feb. 23, 2022. - ADEM ALTAN/AFP via Getty Images

Turkey’s economy grew 11% in 2021, driven by domestic demand, exports and tourism, official data showed Monday. But the flashy rate has been marred by high inflation and appears hard to sustain.

Along with the dangerous surge in inflation, which has hit an annual of nearly 50%, casting a big shadow of uncertainty over the economy, an array of downsides stands out on the other side of the coin. Ignoring the sharp depreciation of the Turkish lira and the resulting inflation risks, Ankara has followed a growth-focused policy, motivated mainly by political concerns ahead of elections next year. It may have achieved a double-digit growth rate, but consumer and entrepreneur confidence has declined, and income distribution and employment indicators offer little to cheer about. The fragile environment in which the economy expanded has been marked also by fleeing foreign investors and a high-running country risk.

The high pace of growth is hardly sustainable this year, given the high inflation and accumulated risks. Coming atop is the crisis over Russia’s invasion of Ukraine, which is already dealing fresh blows on the Turkish economy. A growing number of pundits forecast that economic growth will be limited to something between 1% and 2% in 2022.

While most developed and emerging economies contracted in 2020 amid the havoc wreaked by the COVID-19 pandemic, the Turkish economy grew 1.8%, thanks largely to a cheap loan bonanza. The momentum picked up in 2021, with gross domestic product (GDP) growing 7.3% in the first quarter; a whopping 21.9% in the second quarter, which owed much to a strong base effect from the downturn in same period the previous year; 7.5% in the third quarter and 9.1% in the fourth quarter.

Standing out is a 16.6% value-added increase in the industry as well as a 21% expansion in the services sector, which had all but imploded in the early stages of the pandemic. Yet two other key branches of the economy contracted. The agricultural sector shrank 2.2% under the impact of drought among other adversities, and the construction sector — on a continued decline in the past three years — contracted by nearly 1%.

The GDP growth was driven mainly by domestic demand as well as revived exports and tourism. Pent-up demand in the wake of pandemic lockdowns was instrumental in animating domestic consumption as well as foreign demand. At home, the steep uptick in inflation drove spending as well, especially in the second half of the year, as consumers rushed to buy goods before prices increased further.

The soaring consumer inflation, which hit 36% last year and spiked to 48.7% in January, owes much to the central bank’s rate cuts in the last four months of 2021 at the behest of President Recep Tayyip Erdogan, who holds the unorthodox view that high interest rates cause high inflation. Instead of hiking rates to rein in inflation, as conventional economic wisdom dictates, the bank cut its policy rate by a total of 500 basis points to 14%, pushing real yields on the lira deep into negative territory and fueling a flight from the currency. The slump of the lira, which lost more than 40% of its value against the dollar last year, meant a big increase in the cost of imported energy and materials on which the Turkish economy heavily relies.

The rising costs fueled steep price increases across the board, prompting consumers to stock up on household needs and bring forward spending on durable goods and other items. The intense demand led to an inflated increase in capacity usage in the industry. In terms of white appliances, for instance, production grew about 17% last year as domestic demand rose some 10%, while imports and exports increased by about 48% and 18%, respectively.

Meanwhile, the cheapened lira buoyed exports and the tourism sector, whose high performance contributed further to the value-added increase in industrial production and services. Nevertheless, Turkey still posted a current account deficit of $15 billion last year, which amounts to nearly 2% of its GDP.

Similarly, the high growth rate did little to improve income distribution. The share of payments to the labor force dropped to 30% of GDP from 33% in 2020, according to Monday’s data. Employment, meanwhile, increased only 7.5% last year. The unemployment rate hovered above 11% and the composite measure of labor underutilization — often seen as a more realistic indicator of joblessness — remained above 22%, translating to about 8 million jobless. The high growth rate was of little tangible relevance to the prosperity of millions of wage-earners and pensioners, whose purchasing power has been badly eroded by inflation, marked by dizzying price increases in the last two months of the year in particular. And expectation surveys reflect little optimism for 2022, with both consumer and entrepreneur confidence sagging.