What Turkey’s new Central Bank chief means for the economy

In a first for Turkey, an Islamic finance professional has been named Central Bank governor amid questions of whether the appointment is linked to Erdogan’s war on interest rates. 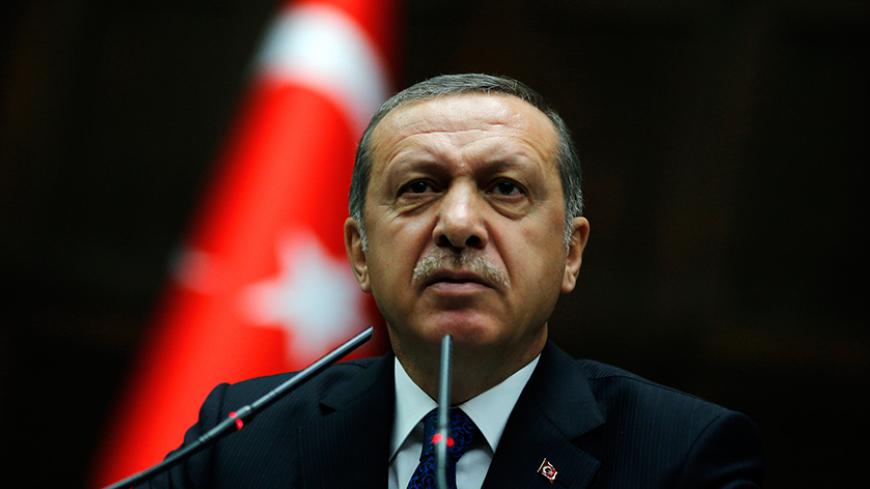 Turkey's Prime Minister Recep Tayyip Erdogan addresses members of parliament from his ruling Justice and Development Party during a meeting at the Turkish parliament in Ankara, June 3, 2014. Erdogan, who has criticized the Central Bank for not cutting interest rates enough, said he did not accept Governor Erdem Basci's approach on interest rates. - REUTERS/Umit Bektas

Recep Tayyip Erdogan’s war on interest rates began immediately after his Justice and Development Party (AKP) came to power in 2002. Flouting the conventional economic theory, the Turkish leader advanced his own theory with the unusual argument that high inflation is the product of high interest rates. As a result, he has often clashed with Central Bank governors, incensed that they kept interest rates too high.

For Erdogan, the “merciless” interest rate system is “the biggest weapon of colonialism,” while his political opponents are an “interest-rate lobby” greedy for higher rates. Thus, he believes, interest-free Islamic banking should be strengthened and expanded. Fourteen years into office, Erdogan may have finally found the perfect Central Bank chief to put his rebellious economic vision into practice.

On April 11, Turkey’s Central Bank got its first governor with an Islamic finance background, Murat Cetinkaya, as a replacement to the outgoing Erdem Basci. For the past four years, Cetinkaya served as the bank’s deputy governor, a post he assumed after a career with Islamic banks such as Albaraka Turk and Kuveyt Turk.

The biggest question in Turkey now is whether or not this appointment reflects Erdogan’s Islamist-inspired economic vision, which many have come to call Erdoganomics. The answer is not easy, for both Cetinkaya and his economic views are a mystery to the public.

“We know nothing about Cetinkaya. We have not even heard him speaking so far. We’ll have to see his policies,” economist Haluk Burumcekci told Al-Monitor. “His selection was likely a compromise between Erdogan and Prime Minister Ahmet Davutoglu, which means no radical changes should be expected.”

Unlike Erdogan, Davutoglu and his deputy in charge of the economy, Mehmet Simsek, embrace the rules of the free market economy and the conventional economic wisdom, hence they believe in fighting inflation and not interest rates.

Former Central Bank governor Durmus Yilmaz, who served from 2006 to 2011, warned that a shift to the policies Erdogan favors would mean a drastic paradigm change, which could shortly trigger an economic crisis. “Turkey is a country with a savings gap. How are the savings to be increased without an interest rate? Would foreign investors come to Turkey then? If interest rates are cut at the pace the president wants, we’ll plunge into a crisis in three months’ time,” Yilmaz told Al-Monitor.

Back in the summer of 2013, when environmentalist protests at Istanbul’s Gezi Park grew into nationwide anti-government demonstrations, Erdogan claimed an “interest-rate lobby” seeking to push up the rates was behind the unrest. Dissatisfied with the Central Bank’s rate cuts, he accused Basci of “treason” and said the 5% share of Islamic banking in Turkey’s banking sector should be increased to 25% by 2025. “The interest rate system is unfair and merciless. It’s the biggest weapon of colonialism,” he added.

Cetinkaya’s first major test with the financial markets will be on April 20, when he makes his maiden interest rate decision.

Yilmaz, who is remembered for a remarkable resistance to government pressures during his term at the Central Bank’s helm, said, “The markets will no doubt test the new governor. They did the same with me as well. They wanted to see how much influence the government wielded over me or how independent my policies would be. It took me three years to convince them I was independent.”

Cetinkaya’s background in Islamic banking, coupled with scarce information about his economic vision and political leanings, has deepened uncertainty over the Central Bank’s independence and monetary policies in the coming period. If one thing is certain, however, it’s that the new governor will have to always consider Erdogan’s unrelenting aversion to interest rates before making a move.