Under fire from the government and the president, Turkey’s Central Bank has abandoned its cautious approach and moved to lower interest rates. 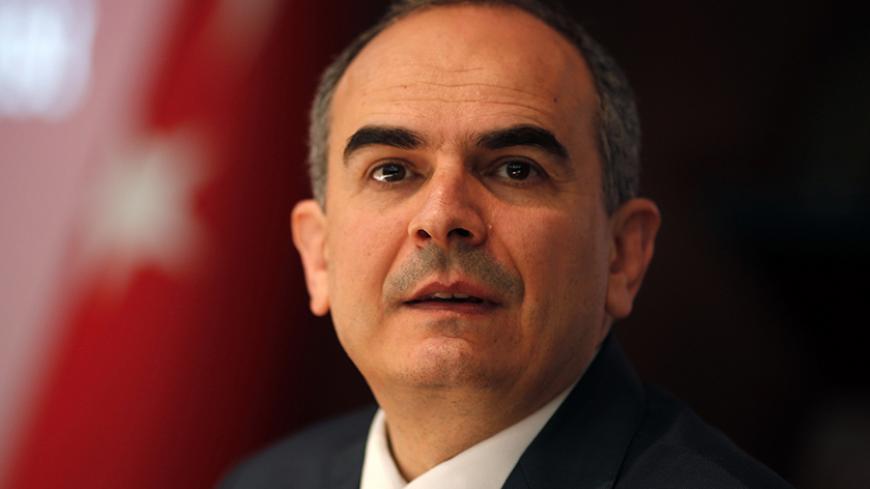 Exasperated with long-standing political pressure, Turkey’s Central Bank seems to have caved in, moving to meet the demands of the president and the government to lower interest rates.

At its Jan. 20 meeting, the Central Bank’s Monetary Policy Committee lowered the benchmark one-week repo rate from 8.25% to 7.75%. The cut, however, failed to satisfy President Recep Tayyip Erdogan and the government. The Central Bank remained under fire. His back to the wall, Gov. Erdem Basci broke with tradition to announce days in advance that a further cut was likely on Feb. 4.

Pressure had mounted on Basci in recent days. Erdogan, who used to often slam the Central Bank in his days as prime minister, burst out again on Jan. 16 after eight months of silence following his ascent to the presidency. “No one speaks out against the high interest rates. The Central Bank has failed to make a move [and] lower the rates. Oil prices have fallen to $45. Hey you, Central Bank, what are you waiting for? Some could now say the Central Bank is independent. I am independent, too. I’ll talk to them [the Central Bank]. This cannot go on like this,” Erdogan said.

Economy Minister Nihat Zeybekci followed up with a veiled threat showing the door to Basci. “If they complain of too much pressure, then the arbiter will change,” he said.

Four days later, on Jan. 20, the Central Bank’s Monetary Policy Committee lowered the benchmark rate by 50 basis points. Yet, both the president and the government remained unsatisfied. Erdogan’s chief economy adviser Yigit Bulut posted this message on Twitter: “The Central Bank did not surprise again, failing to show courage in the name of the country’s interests, unlike the courage it showed when hiking [the rates]. This decision is absolutely insufficient. They don’t have to wait for the next regular meeting to make another cut. Turkey can’t tolerate those rates a single day.”

Following Bulut’s post, the Central Bank announced it could bring forward the Monetary Policy Committee’s next meeting from Feb. 24 to Feb. 4, raising questions about its independence.

And why Feb. 4? The January inflation figures are scheduled to be announced on Feb. 3. The bank will make the rate decision after seeing how much inflation has decreased. The inflation rate is widely expected to decrease with the impact of falling oil prices, and provide a justification for a rate cut. January inflation is expected to be 7.17%, down from 8.17%. This, in turn, could mean a likely rate cut of between 50 and 100 basis points.

The downward inflation trend has swayed also year-end projections. While presenting the Central Bank’s first inflation report this year, Basci said Jan. 27 that year-end inflation could fall to 5.5%, which would be the lowest rate in Turkey in the past 45 years. The Central Bank had earlier projected the year-end rate at 6.1%.

Falling inflation means mounting political pressure on the Central Bank. Basci feels powerless to wait longer to convene the Monetary Policy Committee. He seems eager to announce a new cut and mend fences with the president and the government. When presenting the inflation report he took the unusual step of offering a briefing for the president in his palace, though the law requires the Central Bank to brief only the Council of Ministers twice a year. Basci’s expression of “readiness” to “brief the presidency if it is deemed necessary” sends an important signal.

Why the Central Bank governor had to make this proposal is evident from the following remarks he made: “I had requested an appointment with the prime minister [Ahmet Davutoglu] at Davos, following the European Central Bank’s decision. I listened to his recommendations. The prime minister said it would be good if we give similar briefings to the president. The Central Bank has briefed presidents before without announcing this to the public. It could be done again, there is no obstacle to that. We are ready, whenever they deem it necessary.”

Erdogan, however, remains critical of the Central Bank, despite the Monetary Policy Committee’s rescheduled meeting and Basci’s signal of an early rate cut. “The interest rates will go down. Some people may refuse to understand this, but they will eventually get it. If interest rates don’t fall, inflation doesn’t fall either,” Erdogan said Jan. 27.

The rate cut will have a positive impact on consumers if and when it translates to lower interest rates on home and consumer loans. A one-point decrease in the benchmark rate is expected to mean a 0.5-point decrease in the interest rates on home and consumer loans. Consumers could benefit further if the Central Bank lowers the nightly marginal funding rate, which currently stands at 11.25%. This rate is known as “the upper limit of the interest rate the Central Bank charges when it lends money to banks on abnormal days.”

The interest rate tussle has also a political dimension. Rate cuts in the wake of harsh statements from the president and ministers create the impression of an “arduous struggle” to have the rates down. Could it be a mere coincidence that each rate cut is preceded by political rebukes? Is it possible to still consider the Central Bank independent?