Higher-than-expected inflation in April makes it harder for Turkey’s Central Bank to lower interest rates as the government wishes, rekindling a long-standing controversy in the country. 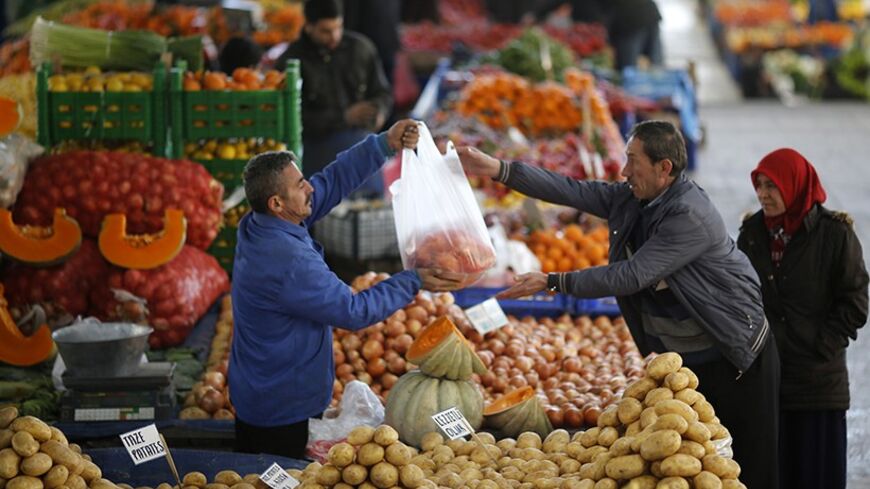 A vendor sells potatoes and other vegetables to a customer in an open market in central Ankara, Feb. 5, 2014. - REUTERS/Umit Bektas

Turkey’s April inflation figures, announced on May 5, broke records. Consumer inflation rose to 9.38% from April 2013, while core inflation climbed to 10.05%.

What are the figures telling us?

Core inflation is considered to be the real inflation because it is stripped from seasonal and external effects, reflecting the price hikes in the private manufacturing industry. Hence, the rise in core inflation indicates a deteriorating inflation outlook, with price increases poised to spill over.

Core inflation had stood at 9.3% in March, the highest rate since 2007, before hitting the double-digit figure in April.

A core inflation of 10.05% carries extra significance for overshooting the 10% interest rate barricade. Thus, lowering the interest rate becomes quite unlikely unless inflation slows down. And putting markets on an interest rate test while inflation is on the rise carries the risk of triggering fresh fluctuations at the forex market.

The overall market expectation for the monthly consumer inflation in April was something below 1%. The eventual rate of 1.3% exceeded even the most pessimistic forecasts, bringing year-on-year consumer inflation to 9.38% from 8.4% in March.

The clothing category was the April champion, with prices rising a whole 13.1% in a single month. In food and nonalcoholic beverages, prices rose 1.42%, bringing the year-on-year rate to 13.15%, the second-highest after the transportation category, where year-on-year inflation hit 13.85%.

Food prices remain under particular risk due to frosts and drought in the country. The head of the Union of Agriculture Chambers, Semsi Bayraktar, said harvesting products in categories affected by frost was yet to begin, warning that their prices could further increase when they hit the market.

The Central Bank is likely to be further squeezed between the markets and the government.

But the 10% policy rate is likely to remain unchanged for at least another one or two months. The benchmark yield, which indicates the rate at which investors trade most during the day, is already down at around 9%. The market is readjusting itself in line with conditions, even if the Central Bank refrains from cuts.

Central Bank Gov. Erdem Basci said last week that inflation will peak in May before it begins to slow down. If he proves right, the Central Bank may lower interest rates in two months’ time. But if inflation keeps on the current rate or shoots up further, even the 10% interest rate could fail to stem it.

Investment houses have already begun to revise their inflation projections. Is Yatirim, for instance, revised its year-end consumer inflation forecast from 7.6% to 8.3%. In its report on the issue, the company said, “While the rise in core inflation and persisting drought are signals of an upward trend in consumer inflation, a larger-than-expected economic growth provides a favorable ground for producers to reflect their rising costs on consumer prices.”

Odeabank, for its part, announced it had revised its year-end forecast from 7.5% to 8.2%. “Even though the prospect of an interest rate cut by the Central Bank is to be discussed at our May 22 meeting, we don’t believe the bank will make any changes before the inflation outlook improves,” it said.

The government reaction to the rising inflation would perplex any economist.

Economy Minister Nihat Zeybekci blamed the high inflation on high interest rates, though the interest rate hikes are thought to have staved off even bigger price increases by stopping the Turkish lira’s free-fall against the dollar. Here is how Zeybekci explained the rising inflation: “It is a result of the adverse conditions, the stormy period we have been through. Most recently, the higher-than-expected interest rate hikes in Turkey [on Jan. 28] have also had an impact on inflation. The interest rates have had a direct cost.”

So, soaring inflation has rekindled the interest rate controversy in Turkey. With inflation widely expected to remain on the rise in May, the Central Bank’s Monetary Policy Committee is unlikely to announce any interest rate cut at its meeting later this month.

The bottom line is that no matter what the government and bureaucracy say, markets eventually sway things.