Fears grow over a looming purge at Turkey’s Central Bank, but the bank’s governor is expected to retain his post. 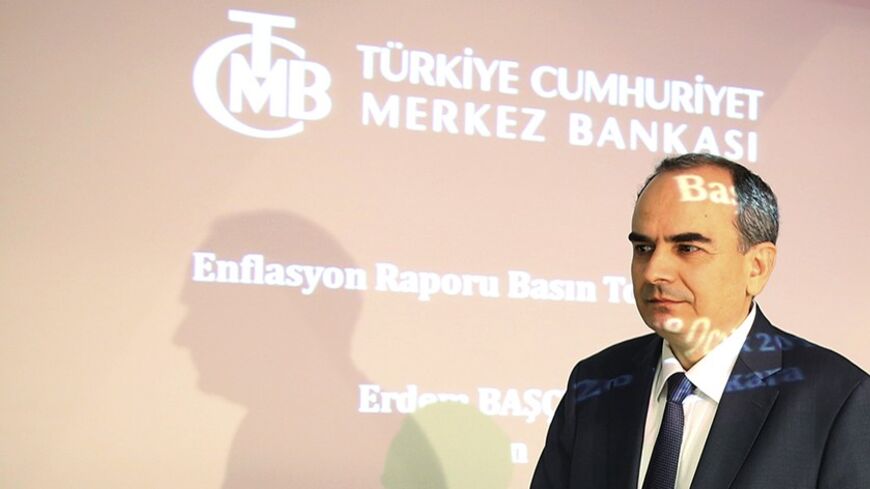 Rumors have been rife recently over the possible dismissal of Turkish Central Bank Governor Erdem Basci, who has resisted Prime Minister Recep Tayyip Erdogan’s calls for an interest rate cut and stuck to a cautious approach based on market conditions.

Despite the rumors, which could be well seen as a veiled threat, the Central Bank’s Monetary Policy Committee (PPK) kept the interest rates unchanged at its latest meeting on April 24. The one-week repo rate — the so-called “policy rate” — remained at 10%, the level to which the PPK had hiked it from 4.5% at its landmark meeting on Jan. 28.

The Central Bank statement read: “Inflation expectations and pricing behavior will be closely monitored and the tight monetary policy stance will be maintained until there is a significant improvement in the inflation outlook.” In other words, the Central Bank dismissed the political pressure and said it would continue to decide interest rates according to market conditions and inflation data.

This was probably the Central Bank’s hardest decision this year. In the coming months, market indicators are expected to improve, opening the door to an interest rate cut and easing political pressure on the bank.

Yet, the Central Bank governor is again under fire for keeping the “policy rate” unchanged. Following the PPK decision, the pro-government press lashed out at Basci, with Sabah leading the onslaught.

In a story headlined “The center of rentiers,” the daily wrote: “The Central Bank insists on not cutting the interest rate, pleasing those who make money from money instead of supporting production. The high interest rate serves 68,000 people with 456 billion Turkish lira [$219.3 billion] in their bank accounts.” Turkey, the article emphasized, is the emerging economy with the highest interest rate after Brazil, whose rate stands at 11%.

But how long can the Central Bank hold out against political pressure?

Though the PPK did not touch the policy rate, it reduced the late liquidity window rate — the rate at which banks buy money from the Central Bank at the very end of the trading day — from 15 to 13.5%. The move was seen as a signal flare that the policy rate could also go down in the coming months.

Enforcing that expectation, the PPK emphasized the outlook was improving. “Recent decline in uncertainties and partial improvement in the risk premium indicators have reduced the need for an additional tightening in liquidity policy. Accordingly, the committee decided to deliver a technical cut in the late liquidity window lending interest rate,” the statement said.

And what about the timing of a possible cut?

To reduce interest rates, one needs to have a calm trend in foreign exchange rates as well as data supporting expectations of declining inflation.

Given that the PPK spoke of persisting inflation-related risks, no cut — or perhaps a minimal one — is likely to be announced in May. Moreover, Basci, speaking at a gathering in Skopje on April 28, said inflation was expected to peak in May.

Starting in June, improvement in inflation figures is likely to gradually affect interest rates. The positive outlook has been reinforced also by European Central Bank Governor Mario Draghi, who said it could consider monetary expansion if the inflation outlook deteriorated. A monetary expansion in Europe would increase the inflow of “hot money” to Turkey, thus serving as an efficient remedy in calming down foreign exchange rates. This, in turn, would be instrumental in reducing interest rates and boosting growth.

Yet, a key question remains: Could the Central Bank governor fall prey to a political fury in the meantime?

Basci’s primary assurance is Deputy Prime Minister Ali Babacan, Turkey’s economy chief, who not only brought him to the post but is also a long-time personal friend. So, a move against Basci would be in a sense targeting Babacan as well. The government making such a move at the expense of unsettling markets ahead of presidential elections in August is considered to be an “irrational” option. The Babacan-Basci pair enjoys credibility not only in Turkey but also in international business and financial quarters. Their reputations are free of any major allegation or accusation, which is seen as an additional “insurance” for them.

Erdogan’s demand is expected to be met before the presidential elections in August after inflation enters a downward trend, thus allowing a cut in the interest rates. The onslaught on the Central Bank is also likely to gradually abate, for economic improvement will play in Erdogan’s hands in the runup to the polls.

The relationship between Erdogan and Babacan appears to be free of any major problem. On April 25, a day after the Central Bank’s interest rate decision, the two were seen sitting side by side and chatting during a gathering at the Constitutional Court. This can be taken as a telling sign, given the prime minister’s habit of avoiding people he is angry with. In another telling sign, Erdogan made no critical comment over the PPK decision.

Another key factor is also at play: Babacan is serving as a minister for the last time under the statute of the ruling Justice and Development (AKP), which limits its members to holding three consecutive parliamentarian seats at most. So, Babacan is likely to retain his post until the general elections in 2015. And as long as he stays in office, the Central Bank governor is unlikely to lose his job.

Having said that, the April 25 dismissal of 16 senior officials from the Capital Markets Board (SPK), among them four deputy chairmen, fueled fears that similar major operations are looming in the Central Bank and other economic bodies. A series of probes are underway not only in the police but in all public institutions to dismantle the so-called “parallel state” [of followers of Islamic preacher Fethullah Gulen]. Unwanted bureaucrats are being sacked with laconic notices of their dismissals “deemed necessary,” just as it happened at the SPK last week.

An eventual purge at the Central Bank, rumors say, is likely to reach as high as the three deputy governors sitting on the PPK. Meanwhile, rumors are also rife that Basci may resign, even though he has played down such a prospect and asserted he remains on his post.

In sum, even if the governor retains his post, the Central Bank appears headed for a major purge. Many bank officials are already on tenterhooks, and some reports even suggest that the anxiety has ground the bureaucracy to a halt.

The Central Bank’s decision to keep the interest rates unchanged, coupled with the SPK dismissals and growing fears of purges at other economic agencies, had no major impact on the markets. On Friday, April 25, the day of the SPK shake-up, the stock exchange’s Istanbul 100 Index lost 1.38%, hit also by the crisis in Ukraine, before gaining 1.41% when it opened again on Monday, April 28.

The relative calm in the markets is seen as a reflection of declining political tensions and expectations of “continued stability” until the general elections next year. The mood has also been boosted by Standard and Poor’s, which said on April 28 that its macroeconomic projections for 2014 and 2015 were positive. The credit rating agency is now expected to follow up with an upgrade of Turkey’s outlook from “negative” to “stable.”