Boosted by his party's performance in municipal elections, Turkish Prime Minister Recep Tayyip Erdogan has renewed pressure on the Central Bank to cut interest rates, but the bank fears premature cuts amid rising inflation could destabilize the economy. 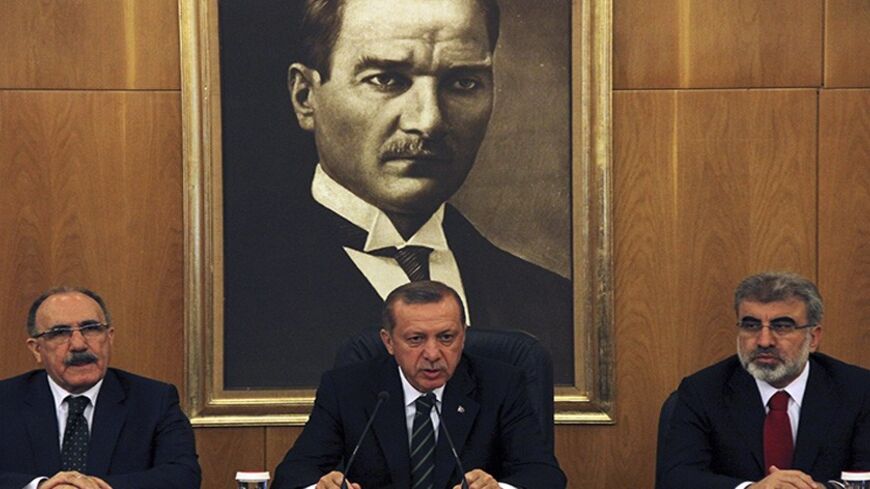 Turkish Prime Minister Recep Tayyip Erdogan called on the Central Bank on April 4 to cut interest rates. Erdogan had made a similar demand some four months ago, while alleging the existence of an “interest rate lobby,” but his wish never materialized. To the contrary, the Central Bank was forced to announce massive hikes of 4 to 5.5 base points in overnight borrowing and one-week repo rates. The bank raised the rates after the Turkish lira fell sharply against the dollar, hit by corruption allegations, the threat of political chaos ahead of elections and a move by the US Federal Reserve to put the brakes on bond buying. Foreign investors began exiting the Turkish market, lured back to the United States by rising interest rates. Erdogan reacted by asserting that he would “tolerate this for some time.”

The record hike calmed financial markets to a certain extent, with the lira rebounding from about 2.3 to 2.17 against the dollar. Lingering tensions ahead of the March 30 local elections then led to the lira fluctuating back in the 2.21-to-2.25 range. The yields on bank deposits, meanwhile, rose from 7-8% to 11%.

The election results showed that the ruling Justice and Development Party (AKP) remains strong, so the markets were quickly lured by the prospect of continued political stability. The lira regained more ground, reaching 2.09 against the greenback.

The main 100 Index of the Istanbul stock exchange shot up from 64,000 to 74,000 points. In January alone, foreign investors had sold more than $400 million worth of shares, compared to $429 million for all of last year. In February and March, however, the tide turned, with total net buying of $885 million, and the index rallied. Investors' appetite appeared to persist into the first week of April.

The return of foreign investors is boosting the Turkish lira. The prospect of political stability has since been coupled with expectations that the European Central Bank will ease liquidity, which also contributes to improving Turkey’s financial indicators. There is also another factor boosting the market's optimism: The negative expectations and chaos scenarios surrounding the August presidential elections are fading.

An Erdogan presidential victory is a near certainty given that the AKP mustered 45.5% of the vote in the local elections. If Erdogan ultimately decides to run, he will draw support not only from his own electorate but also from voters of the Islamist Felicity Party and the pro-Kurdish coalition of the Peace and Democracy Party (BDP) and the People's Democracy Party (HDP), whose electoral support stands at 6.1% and 2%, respectively. Together they constitute 53.6% of the vote.

The markets are rallying because they appear to have bought into the prospect of an Erdogan presidency and long-term stability in Turkey. Yet, the political outlook is not the only factor swaying the economy. Inflation rates, in particular, are playing a major role in pushing down interest rates. The government’s mid-term economic program had originally set the 2014 inflation target at 5.3%. Despite a subsequent upward revision to 6.6%, year-on-year inflation exceeded 8% in March. Unless this trend is reversed, the Central Bank can hardly go for a significant cut in interest rates.

Thus, despite Erdogan’s explicit call for a cut, Central Bank Governor Erdem Basci remained cautious, given the current figures. On April 7, he announced, “Don’t expect any big cut. I think the cuts should be made step by step. Their timing and pace is very important.” Basci recalled the 1994 crisis, when the government insisted on keeping interest rates low, but ended up paying interest rates of up to 400%.

Meanwhile, Deputy Prime Minister Ali Babacan, who oversees the economy, said, “The Central Bank will monitor the developments and decide for itself,” reflecting his concern about premature moves unsettling the markets. Turkey has the highest inflation rate among emerging economies. A drastic cut in interest rates before restraining inflation could send the Turkish lira back into a nosedive.

The Central Bank’s Monetary Policy Committee had highlighted this point on Jan. 28, when it announced the massive interest rate hikes: “Tight monetary policy stance will be sustained until there is a significant improvement in the inflation outlook.”

Erdogan, having acquiesced to “tolerate” high interests for a while, seems to be running out of patience. The Central Bank, for its part, wants first to see whether market enthusiasm will make a positive impact on prices. Barring tensions in the run-up to the presidential elections, improvement in other economic indicators is likely to start pulling down inflation in June. The Central Bank will then have a freer hand.