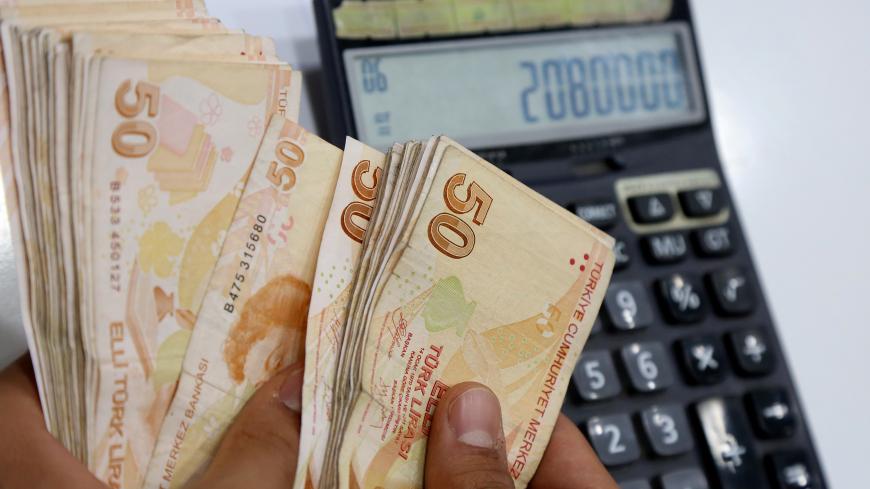 With snap presidential and parliamentary polls only a month away, Turkey is grappling with currency turmoil that has stoked apprehension over Ankara’s ability to contain its growing economic woes. Not so long ago, in 2007, the dollar was worth 1.3 Turkish liras. This a far cry from where the lira has sunk in recent weeks as the central bank watched from the sidelines, restrained by a president averse to raising interest rates. On May 23, the lira plunged to a historic low of 4.92 against the dollar, losing as much as 5% in value, before the central bank finally hiked rates in an emergency move to salvage the currency and calm investors. Yet, given the confidence crisis gripping the markets, the price of the dollar might well break the psychological barrier of 5 liras before the June 24 elections.

How did the problem snowball to that point?

Though the lira had fallen all but three days this month, market hopes for a central bank intervention were unmet. The bank made do with a verbal intervention May 16, which read, “[The central bank] is closely monitoring the unhealthy price formations in the markets. Necessary steps will be taken, also considering the impact of these developments on the inflation outlook.” The dollar retreated for only hours before shooting up anew in the absence of a forceful measure.

The central bank’s credibility took another blow later in the day, when its governor — the head of a supposedly independent institution — was summoned to a meeting with President Recep Tayyip Erdogan at the most unlikely of places: the Justice and Development Party headquarters.

The currency issue came atop Erdogan’s trip to London on May 13-15, which badly shook foreign investor confidence in Turkey. In a series of interviews and meetings with global money managers, Erdogan disappointed anyone who had hoped he would use the opportunity to allay misgivings over Ankara’s management of the economy. Rather than reassuring investors, he argued for policies that defy economic orthodoxy and declared his intent to assume a greater say on interest rates if he wins the election, flouting the central bank's independence.

“Shock and disbelief,” Reuters described fund managers after meeting with Erdogan. Bloomberg, which interviewed the president, stressed, “Erdogan has routinely criticized the central bank for setting interest rates that he says have helped stoke rising prices, an argument that contradicts conventional economic theory.”

Okan Akin, a credit analyst at AllianceBernstein in London, told Bloomberg, “The president’s remarks on the central bank were the final nail in the coffin. The market is pricing Turkey as a single-B credit. Turkish bonds have been trading two notches below the country’s rating for some time anyway, but the country’s assets have negatively decoupled from other emerging markets in the last couple of weeks.”

At home, the waning confidence of domestic actors and consumers was already tangible in official surveys and other economic indicators. Now, the added erosion of foreign confidence threatens to fuel a flight among short-term foreign investors and aggravate Turkey’s woes. The country’s risk premium, reflected in credit default swaps, stood as high as 282 basis points May 22, followed by Brazil and Russia, whose risk premiums were much lower at 196 and 134 points, respectively. This, of course, means that Turkey’s external borrowing cost is on the rise.

According to the central bank, an external debt of nearly $188 billion has to be rolled over in the next 12 months. Add to this the financing needs for a current account deficit of more than $50 billion and the amount of external funds that Turkey needs to secure in the next 12 months reaches some $230 billion. But while the demand for hard currency grows, few are willing to sell before economic uncertainties clear.

Global factors are also pushing up the price of the dollar, which, despite small fluctuations, remains on a strengthening trend. According to the International Monetary Fund, the Turkish lira has suffered the worst depreciation against the dollar.

Two more rate hikes are anticipated this year from the US Federal Reserve, which is underpinning the prospect of a stronger dollar. The respite in the US-China trade war and the coalition government in the making in Italy are among other factors stimulating appetites for investment in developed countries. This means that short-term foreign investors will be pulling out from or investing less in emerging countries such as Turkey, reducing the hard currency supply.

Hiking interest rates on the lira is the most effective tool the central bank could use to neutralize the pressure on the embattled currency. Yet Erdogan has stood in the way, wary that higher rates could abruptly cool the economy ahead of the polls, especially hitting the housing sector, which is already grappling with sizable overstock. With his adamant commitment to low interest rates, both before the domestic public and on the international scene, he effectively paralyzed the very move that could have curbed the dollar earlier.

On May 23, Turkey woke up to a dollar price of 4.8 liras, up from the 4.66 the day before. The lira’s slump, fueled by stop-loss selling by Japanese retail investors overnight, continued throughout the day. The greenback rose to as much as 4.92 liras in a day of complete uncertainty, anxiety and despair amid political inaction. In the evening, the central bank’s monetary policy committee convened an extraordinary meeting and raised its late liquidity window rate by 300 basis points to 16.5%. It was a rather radical move, given that previous hikes had been of 100 basis points at most. The intervention reversed the slump, with the dollar retreating shortly to about 4.55 liras.

This improvement, however, does not mean an all-clear. The question now is this: Will the rate hike deter the rush for dollars or will short-term foreign investors take advantage of the now cheapened dollar to exit the Turkish market, sparking a new wave of demand and pushing up the price again?

The presidential and parliamentary votes take place simultaneously on June 24, but the presidential one is likely to go into a second round on July 8. Some observers believe the lira could continue to tumble in the meantime despite central bank interventions. According to others, however, the central bank will not let the dollar price hit five liras, braving higher interest rates at the expense of a cooling or contracting economy. This arm-wrestling between foreign exchange prices and interest rates will bear not only on the livelihood of voters but also on their decisions at the ballot box.