Turkey’s currency prepares for a fall

After years of efforts to keep its currency valuable, Turkey’s government seems to be shifting to a cheaper lira policy in an attempt to boost exports and reduce the country’s gaping current account deficit. 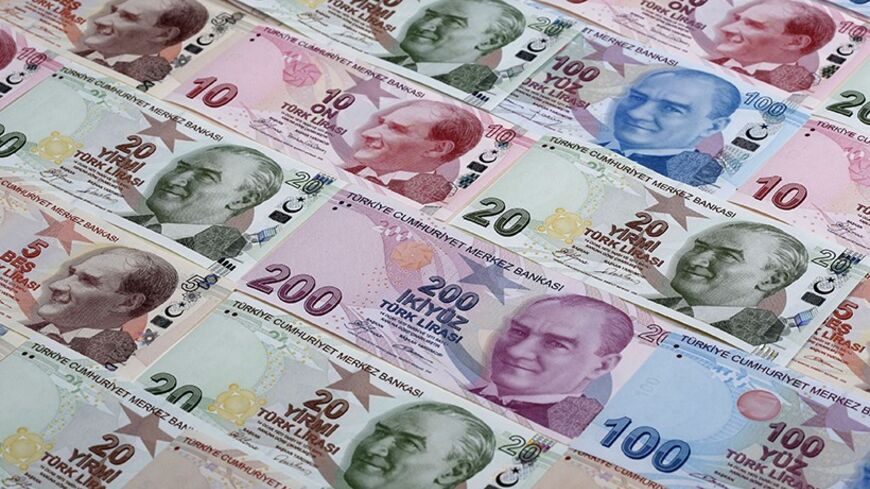 For years, the Turkish government has stuck to a currency policy that treated the Turkish lira’s value as a matter of national pride. Prime Minister Recep Tayyip Erdogan himself explicitly described the lira’s appreciation as a government objective. In ambitious remarks in 2009, he declared: “The Turkish lira will reach such a level that we’ll deal in Turkish lira on international markets. We are taking steps in this direction.” In 2010, he further said: “The depreciation of the Turkish lira is not something I welcome. I believe that a Turkish lira capable of influencing other currencies will serve better the economy.” Ever since, Turkey has sought to maintain the Turkish lira’s dignity.

However, domestic and external factors triggered sharp fluctuations in the last quarter of 2013 through mid-January, plunging the Turkish lira into one of the world’s largest depreciations in that period.

But despite Basci’s assurances, the free fall continued. The year-end exchange rate target — 1.92 lira per dollar — collapsed, and the lira closed the year at 2.158 against the greenback.

In mid-January, adverse external developments, coupled with corruption allegations ahead of elections at home, caused the Turkish lira to lose 17% of its value, the world’s largest slump in that period.

The Central Bank was forced to pull its “policy rate” weapon, hiking the rate by a massive 5.5 percentage points on Jan. 28.

As a result, the Turkish lira, which had hit 2.38 against the dollar, rebounded fast, and has remained on an upward track since the March 30 local elections.

Positive market developments abroad, a growing foreign demand, an anticipation of monetary expansion in Europe, a positive forecast by Standard and Poor’s and an upbeat Central Bank news conference last week have all helped the Turkish lira regain ground against the dollar, with the rate reaching 2.10. Having failed in its struggle to prop up the currency in 2013, the Central Bank appears to be out for settling the score now.

Yet, Erdogan has not spoken of bolstering the lira for quite some time. Moreover, Nihat Zeybekci, who became economy minister in the last cabinet reshuffle in late December, has made comments in stark contrast to the Central Bank’s strong currency policy.

Zeybekci first spoke out on April 10 at a gathering in Sarajevo. “We tend to see the Turkish lira’s value as a matter of national pride, which is wrong,” he said. “Turkey has now forged a new exchange rate. We believe that an exchange rate in the 2.15-2.25 range is the [good] one for the coming period to support and encourage Turkish exports, while reducing the appeal of imports.” The minister further said, “We think that the Turkish lira’s appreciation above this level will encourage imports rather than exports, increase our foreign trade deficit and therefore do no good to the current account deficit.” He underscored that the notion of “one lira per one dollar” was “very harmful” for the Turkish economy.

In further remarks a few days later, Zeybekci said on the TGRT channel that Turkey would beat its export target of $166 billion in 2014 if the lira remained restrained below 2.15 against the dollar. “We won’t allow the Turkish lira to appreciate more,” he said.

Yet, the currency has continued to rise.

A curious incident marked Central Bank Governor Basci’s news conference in Istanbul last week. In the middle of the live broadcast, a breaking news ticker hit the screen right under Basci’s image. The ticker quoted Zeybekci, speaking simultaneously elsewhere: “The lira-dollar rate must be in the 2.15-2.25 range.”

At that moment, the rate had eased from 2.12 to 2.11, and reached about 2.10 the following day. The appreciation was something the Central Bank wished. But the economy minister was unhappy. “The exchange rate should stay at this level. We think the Central Bank should be able to intervene if the rate goes below 2.10,” Zeybekci said.

In the short run, no development is foreseen that can affect the current exchange rate. At his latest news briefing, Basci said the Central Bank could increase the amount of foreign reserves if the capital inflow accelerated and it refrained from selling dollars at times.

What sense to make from this bickering between the Central Bank and the Economy Ministry? Will the lira continue to gain value? What are the projections for the near future?

Al-Monitor posed the questions to Fatih Ozatay, a former Central Bank deputy governor and now head of the Finance Institute at the Economic Policy Research Foundation of Turkey (TEPAV).

Ozatay made the following analysis: “The Central Bank is not trying to keep the Turkish lira’s value high, but to counter the excessive depreciation it recently suffered. The [Turkish] companies’ debt is in foreign currency. Drastic movements in the exchange rate disrupt their balance sheets. The Central Bank is trying to balance the exchange rate. The economy minister, for his part, focuses on exports. The lira’s value is of immediate concern for exporters. So, they all have their own vantage points. But if you ask economists, to favor this or that level for the exchange rate is impossible. Let’s say the Ukraine crisis deepens — then the lira falls. If Turkey interferes too much in Syria, the lira falls. The Fed is going to hike interest rates sometime in the middle of next year. That will also make the lira fall. In sum, we should not take the issue to extremes. To insist on an exchange rate in the 2.15-2.25 range as an absolute must is extreme criticism.”

US to be decisive

Ozatay stressed the United States has the real clout in swaying the exchange rate, concluding with the following projection: “An interest rate hike is expected [in the US] in mid-2015. Back in the 1990s, US rate hikes used to cause upheaval here. [But] US moves in the coming period are unlikely to lead to large capital inflows to Turkey as before. If the European Central Bank opts for a monetary expansion, a certain amount of capital will flow in, but not enough to make up for the adverse US impact. The exchange rates are quite tranquil at present. Yet, in the coming period they could come under pressure to move upward. The [lira’s fall] may not be as big as the one in January, but it would certainly please the economy minister.”