Bent on lowering interest rates, Turkey’s president took the extreme step of ousting the central bank governor, but his insistence on rate cuts is fraught with risks that could fan fresh economic turmoil. 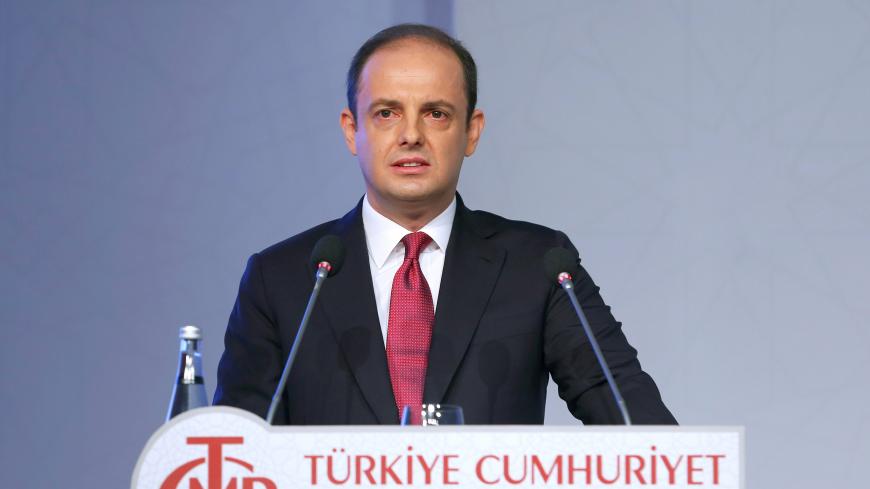 In the same interview, which dumbfounded financial actors, Erdogan raised the specter of greater government pressure on the central bank once the new executive presidency system took effect after the June 2018 elections. “The central bank is, of course, independent," he said. "Yet it cannot use this independence to set aside the signals from the president, who is the head of the executive."

The way Erdogan’s remarks rattled foreign investors — just five weeks ahead of presidential and parliamentary polls — was hardly beneficial for Turkey’s economy and its dire need of external funds. Though Erdogan won the elections with 52% of the vote, assuming sweeping powers under the new system, foreigners shied away from putting money in Turkey, causing hard currency prices to increase. In August, under the added impact of political turmoil with the United States, the Turkish lira nosedived to record lows against skyrocketing foreign exchange prices. As a result, Erdogan’s government had to acquiesce to a massive rate hike of 6.25 percentage points in September to pull the lira from the brink.

Hence, in the very prelude to his new regime, Erdogan faced a benchmark interest rate of 24%, along with a consumer inflation rate of 25% and a badly battered currency. The turbulence plunged the economy into stagnation and then into contraction, which has continued in 2019. In the first quarter of the year, the economy shrank nearly 3%, with leading indicators signaling a similar contraction rate in the second quarter.

While struggling to manage the economy, Erdogan and his Justice and Development Party (AKP) took a heavy blow in the March 31 local polls, coupled with a dramatic rout in the rerun of the Istanbul mayoral race last month. Because of the elections, Erdogan had avoided drastic steps to fix the economy, sticking to populist measures at the expense of enlarging the treasury’s gaps. Expectation had built that the closure of the election chapter would give way to some bold moves, including the dismissal of Treasury and Finance Minister Berat Albayrak, who is also the president’s son-in-law.

Much to the dismay of economic actors, however, Erdogan sacked the central bank governor, Murat Cetinkaya. The July 7 decree announcing Cetinkaya’s ouster named his deputy, Murat Uysal, as the new governor. The merits of the move aside, jurists argue that dismissing a central bank governor by presidential decree is unlawful, given the bank’s special statute. Many believe Cetinkaya could be reinstated should he appeal the decision at the courts, but no one seems to want to brave such a war with Erdogan.

The president had no qualms about revealing why he fired Cetinkaya. “In economic meetings, we repeatedly told him he had to lower interest rates. ‘If interest rates fall, inflation, too, will fall,’ we said. Yet he failed to do what he was required to do,” Erdogan said.

Cetinkaya leaves behind a benchmark rate of 24%, a far cry from the 7.5% when he became governor in 2016. Consumer inflation, which stood at 6.5% in 2016, has similarly shot up, hitting 25% in October before easing to a still unimpressive 15.7% in June. When it comes to the currency, a dollar was worth 2.83 liras at the time of Cetinkaya’s arrival, while it trades in the 5.7 lira range nowadays, having hit 7 liras at the height of last year’s turmoil.

Cetinkaya resisted Erdogan’s pressure for rate cuts on the grounds of the inflation trend, but this was not the only point of friction. In January, for instance, the cash-hungry government arranged for an early transfer of central bank profits to the Treasury instead of waiting for the normal transfer in April. On top of it, the government has launched work on a legal amendment that would allow it to use the central bank’s legal reserves, a sum the bank sets aside by law to use in extraordinary circumstances. Although the move carries a huge risk of fueling inflation, Erdogan is said to ignore objections, resolved to have the money transferred to the treasury, whose deficits look increasingly unsettling, especially to its creditors.

In all crisis-hit sectors, the construction sector in particular, entrepreneurs have been eager for rate cuts, desperate to draw a breath and see domestic consumption revived. The relative easing in the inflation rate has fueled anticipation to that effect.

With the added impact of such pressures, Erdogan was further tempted to have a central bank governor who will readily heed his instructions. Yet both local and foreign investors are already apprehensive of the change. After Cetinkaya’s sacking, Turkey’s risk premium, reflected in credit default swaps, climbed back to the region of 390 basis points, having fallen to about 370 in the wake of Erdogan’s June 29 meeting with US President Donald Trump, which apparently led Ankara to believe that it will duck US sanctions over its purchase of S-400 air defense systems from Russia. The dismissal also hit the Turkish lira. The price of the dollar, which had eased to the 5.6 lira range, has climbed back to more than 5.7 liras since the sacking.

The next meeting of the central bank’s monetary policy board is scheduled for July 22. Now, will the bank cut the rates? And how much?

Many coolheaded economists concur that Turkey’s economy cannot tolerate rate cuts in the absence of a tangible decline in inflation. Price hikes on public services and commodities — deferred because of the elections — have been raining since the beginning of July. Cuts on the special consumption tax, levied on cars, white appliances, alcohol, tobacco and fuel, expired last month, meaning that the price tags on all those goods are now changing. With an estimated 2% inflation in July, the 12-month rate is expected to climb back to 18%.

Also, there are no external tailwinds to encourage a rate cut at present. The prospect of cautious rate cuts by the US Federal Reserve is being played up. Hopes are being pinned on a fresh expansionary policy in the United States and the European Union. The Federal Reserve, however, acts according to both domestic indicators and global politics.

A rate cut at Erdogan’s behest will inevitably drive saving holders to the safe harbor of hard currencies. Other risk factors might exacerbate the flight. The crisis over the S-400s is far from over. At home, Erdogan’s former economy czar, Ali Babacan, is gearing up to create a new party, threatening to split and weaken the AKP. In sum, the insistence on rate cuts, combined with various economic and political dynamics at home and abroad, might well invite a repeat of the August turmoil and further fan the economic crisis.