Turkey’s Central Bank has delivered a rate cut long sought by the president, who's counting on stimulating economic growth to patch up his sagging popular support. 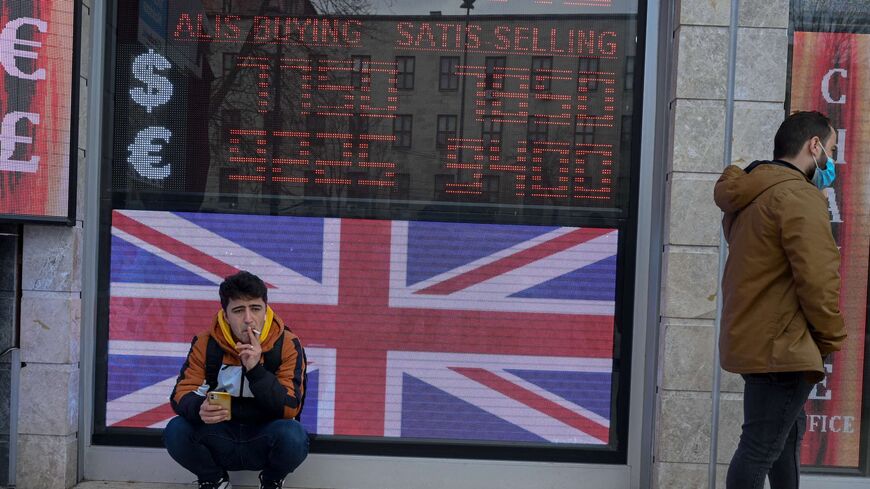 People wait in front of a exchange office at Laleli in Istanbul, on March 22, 2021. - BULENT KILIC/AFP via Getty Images

The decision of the bank’s monetary policy committee lacked convincing economic justifications and came as a curveball for financial markets, where most analysts had expected the rate to remain unchanged at 19%. The embattled Turkish lira plunged anew after the announcement, tumbling 1.5% against the dollar to near a record low of 8.88 touched in June before regaining some ground later in the day.

Central Bank Governor Sahap Kavcioglu had signaled a policy shift earlier this month when he played down headline inflation, which hit 19.25% in August, surpassing the bank’s policy rate of 19%, and said the bank would focus on core inflation, which strips out food and energy prices and is more than two percentage points lower, citing extraordinary conditions owing to the COVID-19 pandemic. Though his message was seen as a harbinger of a rate cut, most observers expected the bank to make the move later in the year.

In other moves seen as preparations for a rate cut, the Central Bank had raised the required ratio for foreign-exchange deposits while the banking watchdog reduced the maximum period of consumer loans over 50,000 Turkish liras ($5,700) to 24 months from 36 months. The prospect of a rate cut had already weakened the lira. The price of the dollar had increased 4.5% in the past two weeks, raising the specter of further dollarization in the country.

Meanwhile, the US Federal Reserve signaled that it would begin to reduce its bond purchases soon, a prelude to monetary tightening and higher interest rates in the United States. For emerging economies like Turkey, it augurs a lesser inflow of foreign funds as global investors turn to the United States, meaning that Turkey might have to face a shrinking foreign-exchange supply and thus higher foreign-exchange prices. Other peer countries were quick to take action, with Hungary and Brazil hiking their policy rates and Taiwan and South Africa expected to follow suit soon.

But not even that danger stopped Turkey’s Central Bank from lowering its rate as Erdogan’s pressure obviously outweighed other concerns.

Many already wonder whether the bank will follow with another rate cut at its next monetary policy meeting in October. Consumer inflation might drop to the region of 17-18% if the monthly price increases stay at around 1% in September and the remaining months of the year. Thus, the prospects remain murky and hard to forecast.

What could the Turkish economy gain from Thursday’s rate cut and, potentially, an equally small one in October? Will they cheapen credit, invigorate the markets and stimulate growth? For many pundits, they are not worth the fragilities they cause, primarily by weakening the lira. According to Kerim Rota, a veteran of the financial sector, such rate cuts would be of little use and fail to cheapen loans and are mere grandstanding by Erdogan.

In pushing for lower interest rates, Erdogan’s primary concern is the erosion in his voter base. Recent opinion polls point unanimously to a steady decline in the popularity of Erdogan’s Justice and Development Party and its ally, the Nationalist Movement Party. The rising cost of living, rampant unemployment, inadequate welfare support and other grievances stemming from Ankara’s poor management of the COVID-19 pandemic are among the main factors stoking voter disgruntlement.

Waning confidence in Ankara’s economic policies has fueled dollarization, with Turks scrambling to preserve the value of their savings. And in an economy that is heavily reliant on imports, the uptick in foreign exchange prices translates to steep increases in both producer and consumer prices.

Turkey experienced similar woes in mid-2018, when annual consumer inflation shot up to 25%. At that time, however, Finance and Treasury Minister Berat Albayrak — Erdogan’s son-in-law — backed the Central Bank's radical move to hike its policy rate by 7 percentage points, which helped curb inflation. To further prop up the lira, the Central Bank funneled foreign exchange to the market at the expense of burning through $128 billion in foreign reserves in less than two years.

Yet Erdogan is averse to monetary tightening to tackle inflation, as it interferes with his passion for continued economic growth. He wants to see interest rates lowered quickly so as to stimulate growth through loan expansion and increased consumption. He counts on growth to appease the economic grievances of the masses and patch up his popular support. The unruly inflation, however, stands in the way, fueled by declines in food supply and structural problems in the agricultural sector as well as the devaluation of the lira, which has pushed costs up in myriad sectors relying on imported inputs.

The rise in global energy and raw material prices amid the pandemic has brought about further headwinds for Erdogan that are unlikely to abate soon. At home, savers continue to see hard currencies as a safe haven, mainly because of ongoing mistrust in Erdogan’s economic management. Foreign currencies account for 55% of all bank deposits in the country, with the rate reaching 65% among well-off groups.

To encourage return to the lira, the most efficient course of action would be to raise interest rates so as to ensure that real yields are one or two percentage points above the inflation rate. The Central Bank, however, has shied away from such a move since it would slow the economic growth that Erdogan desires and make it look like he is conceding defeat, for he has declared himself an “enemy of interest rates.”

The increasingly stubborn inflation is only compounding mistrust in the government at a time when economic woes top the grievances of the electorate. The longer Erdogan fails to rein in prices, the greater the risk to his political survival.