The Turkish president’s insistence on spurring growth despite mounting inflation and the risk of further dollarization is a further invitation to continued economic turmoil. 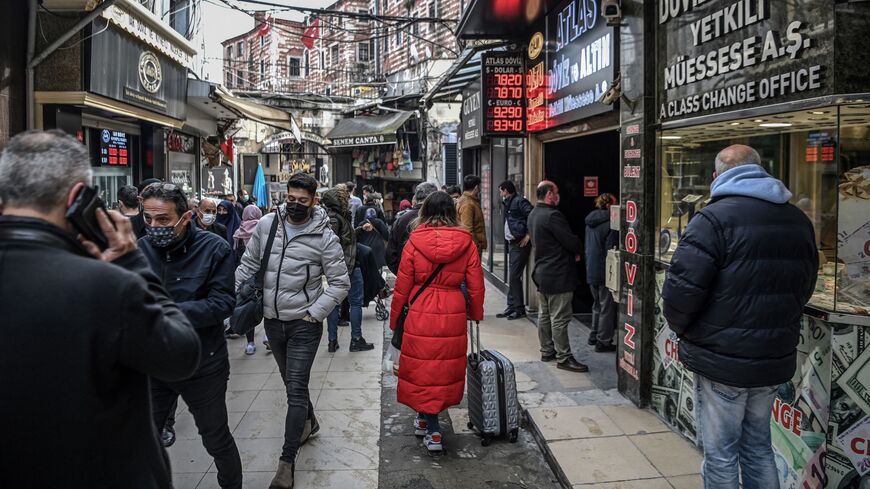 President Recep Tayyip Erdogan’s assertions that interest rates would be decreased and stop Turkey’s nearly 19% inflation from rising further have sparked fresh jitters in financial markets as the Turkish leader appears bent on spurring economic growth at the expense of costly side effects.

Erdogan’s remarks last week came as a signal that he intends to pressure the central bank to lower rates, sticking to his unconventional view that high interest rates cause high inflation. Following his remarks, the Turkish lira, which was already under pressure from global trends, weakened as low as 8.64 to the dollar Aug. 6 — it had been 8.56 — and has stayed in that region since (it was around 8.65 to the dollar Aug. 11). The downtick is expected to continue in the coming days, raising the specter of a fresh dollarization wave.

According to the international credit rating agency Fitch, the already high dollarization rate in Turkey, driven by the lira’s dramatic depreciation since 2018, is likely to increase further as real yields are turning negative after annual consumer inflation hit 18.95% in July and almost caught up with the central bank’s 19% policy rate. Analysts at investment bank Morgan Stanley, meanwhile, expect rate cuts this year, but not an immediate one at the central bank’s Aug. 12 meeting.

Contrary to Erdogan’s assertions, the rise in consumer prices is expected to continue in August under the impact of shortfalls in food supply amid drought and wildfires plaguing the agricultural sector and a huge gap with producer inflation, which stands at 45% year-on-year. Erdogan’s comments about an upcoming rate cut despite the gloomy inflation trend has fueled concern that he is playing down inflation and would force the central bank to lower rates.

Tackling inflation requires economic cooling and belt-tightening, but Erdogan is clearly averse to such measures and feels compelled to gamble on growth in an inflationary environment. Yet his wiggle room could be shrunk further by fresh dollarization, as evidenced by the immediate rush for dollars in reaction to his remarks.

For Erdogan’s Justice and Development Party (AKP), the “right” economic policy is the one that does not erode its voter support. The AKP, which came to power in November 2002, enjoyed both domestic and external economic tailwinds until 2013, which helped it keep inflation low and sustain economic growth. As a result, it was able to easily preserve and even increase its popular support to win consecutive elections. After 2013, however, the tide turned. Most notably, the abundant flow of foreign capital to Turkey began to decrease, inflation picked up and the economy’s growth rate declined, making it harder to please voters.

Today, Erdogan continues to opt for a high growth rate, despite the hefty economic price it could exact, in a bid to offset the popular frustration with soaring inflation. He rarely speaks of fighting inflation, while highlighting the economic revival that has followed the turmoil caused by the COVID-19 pandemic.

Turkey’s gross domestic product (GDP) is estimated to have grown by a staggering 18% in the second quarter of the year, driven by a strong base effect from last year’s downturn but also a vibrant consumer demand after the removal of pandemic restrictions. As Al-Monitor reported last month, the revival of demand owes also to an inflation-driven consumer urge to buy goods and bring planned spending forward before prices increase further. Given the 7% growth in the first quarter, Turkey is likely to post a growth rate of about 12% in the first half of the year in the wake of the 3.3% contraction in the same period in 2020.

Erdogan is essentially arguing for a policy that will spur the GDP growth as much as possible in the second half by lowering interest rates without regard to inflation. Economic growth is the main element on which he currently relies as it is also easing unemployment, despite side effects such as inflation and rising foreign-exchange prices. According to official data released Aug. 10, the country’s official unemployment rate fell to 10.6% in June, and the composite measure of labor underutilization — widely seen as a more realistic indicator of joblessness — decreased to 22%. The unemployment rate had stood at 13.4% and labor underutilization at about 30% earlier this year.

Erdogan’s wishful thinking does not mesh with the realities. Producer prices rose by about 2.5% in July despite a relative easing in foreign-exchange prices, meaning that the pressure of cost inflation continues via commodity prices, especially energy prices. Even if annual producer inflation stops increasing in the coming months under the impact of base effects, it is widely expected to stay in the region of 35% to 40% by the first quarter of 2022. On the consumer leg, food inflation appears rather resilient. Food prices rose 2.8% in July alone, bringing year-on-year food inflation to nearly 25%. The economic cost of drought, followed by wildfires since late July, will contribute to price increases on agricultural products.

The gap between producer and consumer inflations has reached 25 percentage points, which, according to experts, is swaying the economic perceptions of consumers. For instance, people faced with a 45% inflation rate as producers or their employees are likely to play down the 20% rate they face as consumers and shape their expectations according to a higher rate such as the 30% average of the two. And with bank deposit rates well below that figure, people either turn to buying before inflation further erodes their purchasing power or put their savings in hard currency.

Erdogan’s inclination to insist on growth despite mounting inflation and rising foreign-exchange prices, which only stoke up inflation, is an invitation to further economic turmoil for Turkey. Pushing the central bank to cut rates and sticking blindly to the belief that rate cuts will curb inflation is nothing less than playing with fire. But in the tight spot in which he finds himself, Erdogan is averse to alternative game plans. He has several times played that risky game in recent years, leaving behind unignorable damage. His obstinate attitude threatens to undermine his own government while foisting hefty bills on Turkey’s low- and middle-income groups as well as future generations.