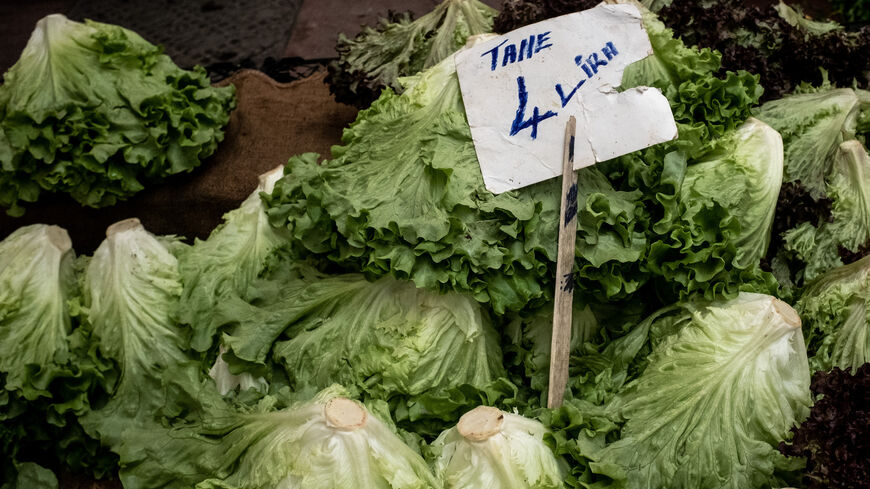 Lettuce is seen for sale for 4 Turkish lira at a local street market on March 22, 2021 in Istanbul, Turkey. - Chris McGrath/Getty Images

Driven by growing food and transportation costs, annual consumer prices climbed 1.42% last month, up from 17.53% in June, surpassing a Bloomberg forecast for 18.6% in July.

On June 2, Erdogan said interest rates should start falling “around July or August,” adding it was “imperative” the Central Bank ease credit to help boost the nation’s slow economic recovery amid the resurgent COVID-19 pandemic.

In light of the July inflation data, which also saw the domestic producer price index rise about 2.5% to 44.92% on an annual basis, plans for an interest rate cut will likely be postponed until more favorable economic conditions materialize, said Timothy Ash, an analyst at BlueBay Asset Management.

The news comes as a large number of wildfires are impacting Turkey’s southwestern regions.

Ash noted public anger over the government’s perceived lack of preparedness in containing the fires may result in a dip in Erdogan’s popularity, which the Turkish leader could seek regain by stimulating economic growth through a renewed push for interest rate cuts in the fall.

“By the autumn, we’ll see a big pressure on the Central Bank to loosen policy because Erdogan’s popularity will be under pressure and they’ll need growth again,” Ash told Al-Monitor, adding, “It’s very hard for them to cut now.”

According to TurkStat’s latest data, food and nonalcoholic beverages saw the highest increases, rising by nearly 25% annually, followed by transportation, which rose 24.62% and then home furnishings, which rose 22.70%.

On July 29, Central Bank Governor Sahap Kavcioglu announced the bank raised its year-end inflation forecast to 14.1%, up from 12.2%. Kavcioglu said the bank’s monetary policy committee would seek to maintain a tight stance until a sustained decrease in inflation was achieved, adding volatility could be expected in the months ahead.

"Inflation may follow a volatile course in the summer months,” Kavcioglu said last Thursday. “Our monetary policy stance is tight enough to prevent these volatilities being reflected in the main trend.”

The Central Bank’s next rate meeting is scheduled for Aug. 12. Since his appointment in March, Kavcioglu has maintained the key interest rate at 19% amid inflationary trends, despite political pressure to cut it.

Following the publication of July’s inflation data Tuesday, the Turkish lira initially gained against the dollar, reaching 8.30 liras per greenback, before falling to about 8.42 at 6 p.m. Istanbul time. While the lira has recovered some value against the dollar in recent weeks, it remains down about 14% since the start of the year.

Ash said foreign investors and Turkish citizens have been more hesitant to hold savings in liras or invest in Turkish markets following a series of unexpected events in recent months, including Kavcioglu’s surprise appointment in March that made him Turkey’s fourth Central Bank chief in two years.

In addition, a number of staff reshufflings at the Central Bank and TurkStat have raise questions over the institutions’ independence.

“I think people are increasingly suspicious,” Ash said, referring to the latest inflation data. “It’s hard to prove, but one or two years ago, I would definitely have trusted the numbers. Now my confidence is lower.”

He added, “I think the problem is there’s been such institutional erosion in Turkey across the board, whether it’s the Central Bank or key ministries, that this itself creates question marks.”