Turkish stocks slid and the lira hit a six-month low against major currencies Thursday as higher-than-expected US inflation data weighed on emerging markets. 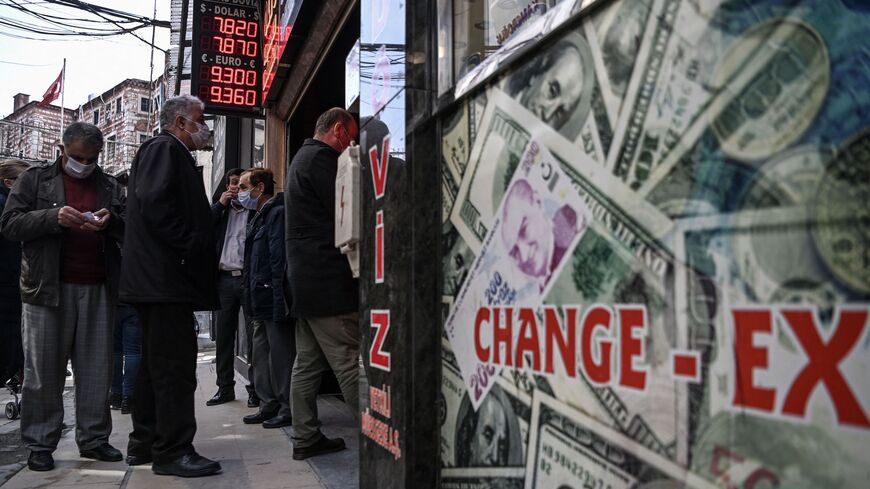 Customers wait in front of a currency exchange shop as a screen shows rates near the Grand Bazaar in Istanbul, on March 22, 2021. - OZAN KOSE/AFP via Getty Images

ISTANBUL – A rolling decline in Turkey’s lira accelerated Thursday as the currency slid to a six-month low after US inflation data put pressure on most emerging markets.

The lira fell about 0.8% Thursday, briefly surpassing 8.5 to the dollar, just shy of its 8.58 record low in November. The news weighed on Turkish markets, which were closed for the Muslim holiday of Eid al-Fitr, and Turkish stocks appeared headed for their worst day since late March due to an offshore selloff.

The latest tremor comes after US consumer prices jumped to 4.2% Wednesday, up from 2.6% in March, its steepest rise since 2008. The figures raised expectations the US Federal Reserve will tighten its monetary policy sooner than expected, sending most emerging market currencies down Thursday, with the Turkish lira leading the cohort.

“The lira has depreciated more than other emerging market currency by the upside surprise to US inflation and the subsequent rise in US bond yields,” Ugras Ulku, head of European emerging markets research at the Institute of International Finance (IIF), told Al-Monitor. “This, in part, reflects the fact that Turkish markets are closed due to the Ramadan holiday and the current level of the lira exchange rate is based on relatively thin trading volumes.”

Since the shocking appointment of Turkish Central Bank Governor Sahap Kavcioglu in late March, the lira has lost about 13% of its value against the dollar. As Turkey’s fourth Central Bank governor since 2018, Kavcioglu took the helm on expectations he would cut the nation’s benchmark interest rate, but has so far maintained a 19% rate set by his predecessor as a weak lira coupled with 17.14% annual inflation in April have restricted his options.

Selva Demiralp, an economics professor at Koc University and director of the Koc University-TUSIAD Economic Research Forum, said expected rate cuts under Kavcioglu, who had previously criticized high interest rates, remain the main trigger for the depreciation of the Turkish lira.

“Market response to an anticipated rate cut most likely prevented the [bank] from actually cutting the rates,” Demiralp told Al-Monitor. “Even though they haven’t considered a rate cut, they are not able to convey a strong and credible message about maintaining a hawkish stance, either, which is the reason for the weak lira.”

Demiralp added that external dynamics, such as inflationary trends in the United States, have prompted a retreat from risky assets and added pressure on emerging markets, but predicted the outflow would decline once fears of a rate hike by the US Federal Reserve subside.

The Mitsubishi UFJ Financial Group also pushed back its expectations Monday for monetary-policy easing in Turkey, predicting such moves would begin the year’s third quarter instead of the second quarter.

The developments come after Wells Fargo published a report Tuesday ranking Turkey among the nations most vulnerable to an external debt crisis in the near term. The news follows an IIF report last week in which the institute revised its fair value estimate for the Turkish lira to 9.5 per dollar, up from 7.5 in June 2020.

The change was driven by steep declines in market sentiments toward the Turkish economy since Kavcioglu’s appointment in late March. Ulku, who co-authored the report, said the IIF lifted its estimate because Turkey’s current account deficit “is looking a bit wider than we had assumed earlier this year, and capital flows look a lot weaker.”

“That balance suggests to us that the equilibrium fair value has shifted, and within our fair value assessment framework we get a roughly 10% overvaluation for the lira in real effective terms,” Ulku told Al-Monitor.